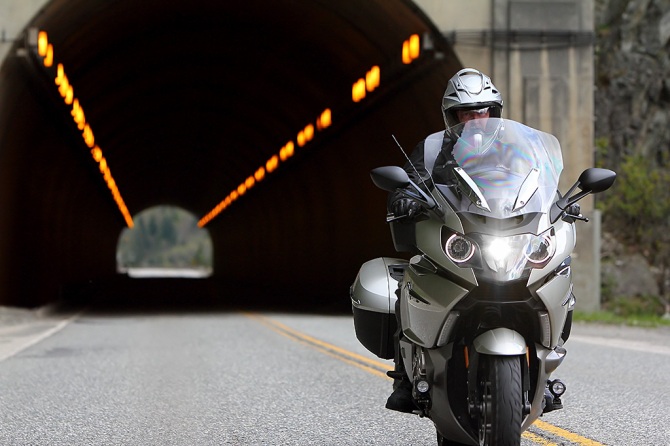 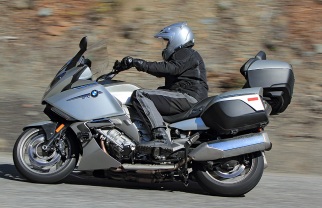 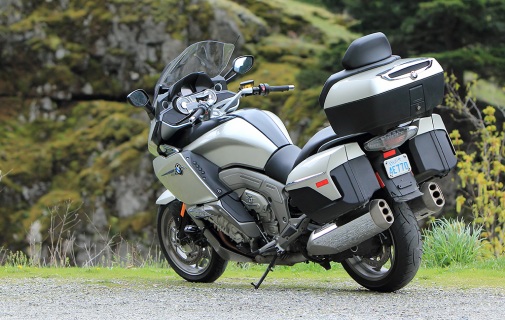 – Photos: Kevin Miklossy
Motorcycles can be a summary of a corporation’s collective psychology, and in that case BMW’s latest super-touring fraternal twins, the K1600GT and K1600GTL, can be summed up as daring. Though, as you hunt down sport-boy on the R1, he glancing in the rear view mirror and catching a glimpse of your fully bagged ultra-opulent 1649cc, 160hp, 129lb-ft of torque, weapon of choice may sum it up differently. Most likely as, “WTF?!?” R1-boy’s assessment is just as correct, because the BMW K1600GT & GTL beg the question, at what point does powering out of a 70kph max-suggested corner at warp-9 qualify as “touring”?

The answer is clear of course. Over a 13-hour day, R1-boy will squirm in his uncomfortable seat; stretch cramped legs; try to tuck under his minimalist windscreen; wish for a bit more weather protection; wonder if he’ll reach his overnight in time to buy some spare underwear to complement the tooth-brush he brought in the name of touring; and wince as he fails to lose the 319 kg (703 lb) GT or 348 kg (767 lb) GTL hanging like tri-optic doom in his rearviews. On the GT or GTL you’ll be adjust the windscreen a bit to moderate the windshield buffeting, wonder what to wear tonight when you unpack the capacious bags, use the intuitive iDrive to turn up the seat or grip heat, scan the local FM traffic to see if there’s any speed traps ahead, flip over to the iPod for true tunes and then unleash an authoritative F1 howl from the inline-six in the next tunnel.

Lay into the lightly actuating, fly-by-wire throttle and the result is like being shot out of a rail gun; smooth, refined, electric acceleration launching you towards a suddenly closing horizon.

The in-line 6-cylinder engine delivers with a power curve pounded nearly flat on the anvil of engineering genius by a company whose automotive mainstay has been an engine with the same layout. Some of that knowledge may have drifted over to the bike side. There’s heaps of power on tap low down, and often you find shifting is optional, or you just up-shift instinctively well before halfway to the 8,500 rpm red line.

At these low RPMs there’s a susurrating engine whine. It’s a suitably sci-fi sound to match the 6’s feel and technology. Last year Ducati spent a fleeting few months at the top of the castle, for integrating various technologies into the Multistrada 1200 S. BMW’s new control system just laid waste to that for ease of use.

Design wise there are big swaggers of planes, meeting at hard lined edges to avoid the slab-side bland of the outgoing K1300GT and the gelatinous-bulges of the outgoing K1200LT, a bike with the visual draw of a manatee. In short, right down the tri-optic alien glare of the adaptive central headlight flanked by two conventional xenon’s, it works. If only BMW’s recent automotive stylings could be so persuasively authoritarian, in a “you want me, but I’ll scare you senseless” sort of way.

That goes for the performance of both bikes as well. The front end is a bit vague, but not enough to hold you back. The brakes? Well, it’s the first time I’ve come away from BMW’s servo-assisted system with the sense that the feel was just right for the bike. The grip? There’s loads, a good thing as we charge across the province from Vancouver to Kelowna with an aim to make time, and our flight home. As always the photo session ran long, which means that speeds are elevated. Of course we’re taking the interesting way, which also means the long way.

It’s not a test ride without pressure, but it would be lovely to see what these bikes would do on a “course” not flanked with pine and spruce-textured “crash barriers”, and roads still lightly dusted with sand and grime from winter gritting. I’m pleased that our GT comes with the optional traction control and electronic suspension adjustment, both are standard on the GTL.

The surprise is, as much as we’re pushing, at no point on either the GT or GTL do I feel like I’m going to end up wearing Canada as a hat. The Goldwing just got owned, along with the Concours and FJR. If BMW has a worry it’s that these two bikes might cannibalize the “lighter, sportier” bikes in its own line up.

There’s another remarkable thing, the GT and GTL despite sharing the same software and platform, feel very different. It all comes down to ergonomics, with the GTL achieving a more relaxed, upright riding position, through bars that are 25 mm higher and 50 mm more rearward, a lower 750 mm seat cradling you deep in the bike, lower footpegs (creating a tighter relationship between the seat and pegs). The GT, rides higher, with a seat height adjustable between 810-830 mm and a slight forward lean. It, also, has an optional seat, lowering the seat height between 780-800 mm for those with a shorter inseam.

Problems? Well, there’s very, very few. The transmission has long, clunky throws, which stands out against the level of refinement the rest of the GT and GTL attains. At walking speeds, throttle just barely opened, there is a tendency for the fueling to pulse. On, off, on, off, accelerate, coast, accelerate, coast. The GT displayed a greater tendency towards this behaviour than the GTL. Also, these were very early production units, so the issue may have been rectified. Ergonomically, the long reach to the bars on the GT is a stretch (intentional pun). Of course, the windscreen with its infinitely variable electrically actuated adjustment is hard to get “just right”, but really this is a stretch for the nit-picks that make for a balanced article.

Of the two new in-line six BMWs, my preference lies with the sit on top GT, to the sit down and in GTL. It’s a more natural seating position for a sporting mindset. On the GTL, at 6’2”, I’d have to opt for the optional tall seat that raises the height from 750 mm to 780 mm. The GTL though cossets you more, protects you better, and gives you even less idea how truly quick you are going. Spiritually both bikes run on the souls of seized and immolated licenses.

Which means that if you’ve ideas of a peaceful retirement touring on a BMW, you’d best add visions of blue and red in the rearviews. Or perhaps just overtake Mr. R1 and hope the cops take him instead.