– Friend M. Binstead doing the business on the Cheakamus 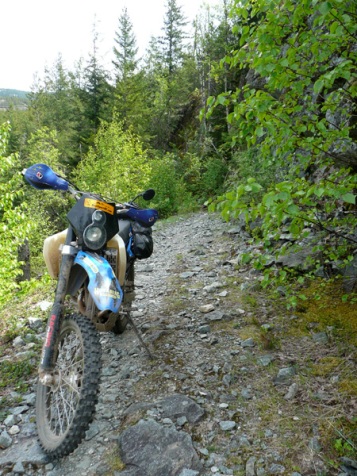 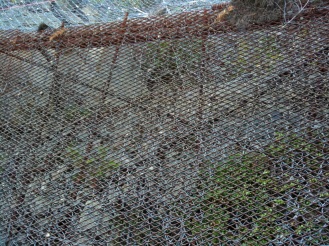 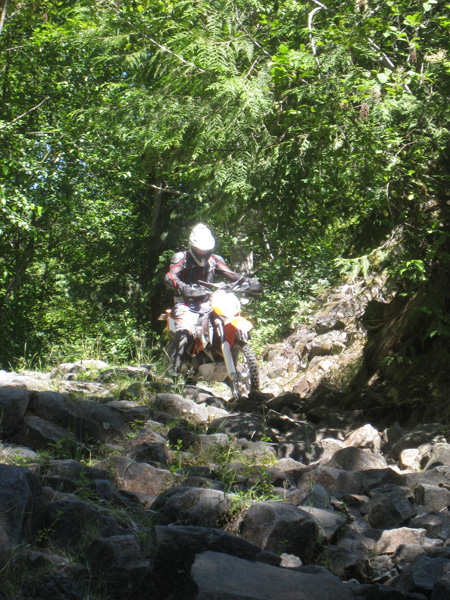 The Lower Section
This is a farewell to one of the enduro riding trails where I cut my dirt riding teeth. Conveniently located off Highway 99 North of Squamish, the Cheakamus Canyon trail offered excitement, challenge and just a hint of danger. Inevitably, it’s been dumbed down as part of the Sea to Sky Trail, connecting the communities from Squamish to D’Arcy. Soon, if the cement markers are any indication, it will be co-opted from motorized use.

Co-opting of the trail isn’t new; the existing pathway is a remnant of the road built in 1913 to facilitate railway construction. Before that it was likely a Squamish First Nation trail. It’s not the co-opting that represents a loss though, it is the exclusion of responsible enduro riding while taking in the canyon views and sweating with the effort and excitement of it all.

The Sea to Sky Trail has seen this convenient fix of challenge and thrill, transformed into a bland non-technical, multi-user mountain-bike trail. In reality, that should rankle a few mountain bikers and hikers too, as what was an interesting piece of backcountry handily located just off the highway has been remade into a trail with all the challenge and excitement of a walk in Stanley Park.

With this serving of the masses, comes the masses serving litter and dog excrement to the former wilds. While, in serving the greater good by re-working existing trails, the side effect is the exclusion of existing users. Meanwhile this section of the 20-plus year old Cheakamus Challenge Mountain Bike race just became a lot less demanding.

Cement markers awaiting signage will simply be the final stake put through motorized usage. Or, as we like to call it, sharing the trail for the enjoyment of all users, not just those who are self propelled. Often it seems those who are self-propelled conveniently forget to share.

At least one bit of excitement in the newly gentrified Cheakamus trail exists. That’s the “chicken wire bridge” north of Starvation Lake. This section of the trail fell away several years ago, covertly someone has engineered a solution consisting of metal posts securing runners of wire cable, which has then been covered over with heavy gauge square “chicken wire”. It is a short, but invigorating crossing.

My personal approach to the bridge has been that a bit of speed is better. The theory being if anything should decide to break free, I want as much momentum as possible carrying me towards the far side.

Per a Georgia Straight interview with Sea to Sky Trail project manager Gordon McKeever, “It’s not clear who put a lot of work into creating the safe crossing which currently exists. It wasn’t a ‘midnight trail-building’ project by any means.” Given the bridge lies within the right of way of the Canadian National Railway, it’s not a surprise the make-shift engineers haven’t identified themselves. With identification comes liability, and the attention of the Railway who discourage usage of the trail.

Previously the Railway’s welcome mat required you get a good run to cross the rails, followed by navigating loose dirt and large cement blocks on the southern side of the tracks to exit onto the forestry roads connecting to Squamish. It was tricky at best, and required extra hands for those of us on bigger bikes like the KTM 640 Adventure or 690 Enduro R. It made the trail a place of friendship and bonding, where I’ve learned and where Kevin and I have taken others during their fledgling off-road experiences.

The last time I rode the Cheakamus, the real trail, not current pap for the masses incarnation, we’d pulled aside on a steep rocky downhill to let some hikers walk by. There was no acrimony, just two groups enjoying an outing in the woods on equal grounds. The hikers stopped to chat and warned us the rail crossing was potentially uncrossable. Luckily, the more experienced members of our group disagreed.

The ride was likely the last time legal shared usage between self-propelled and motorized users on the Cheakamus would occur in my brief dirt riding history, revealing a disturbing trend in Lower-Mainland trails. Leading to great views of the canyon and the railway, unencumbered by crowds, and offering excitement in a convenient and readily accessible location, I can’t help but feel sentimental for this short trail.

The Cheakamus was a formative dirt riding experience on my KTM 690 Enduro R, and it will be deeply missed, along with other trails lost to an idea of “shared usage” that continue to exclude responsible motorized use. For the time being there is at least a last chance to ride the Chicken Wire bridge.

More on the Sea to Sky trail can be found here: http://www.seatoskytrail.ca