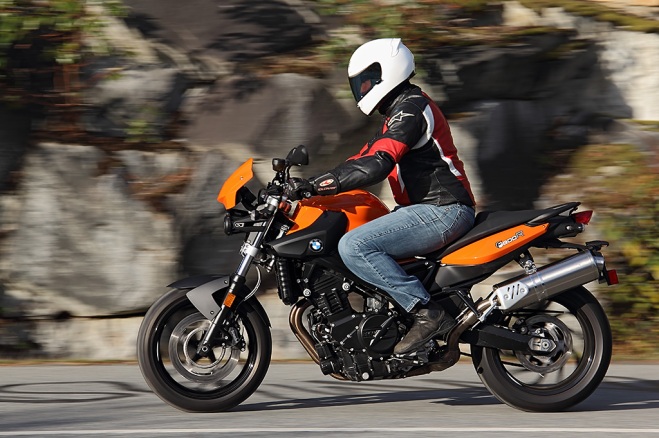 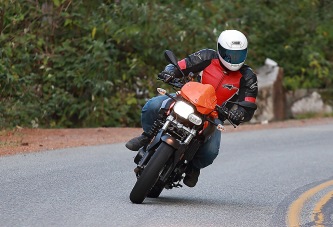 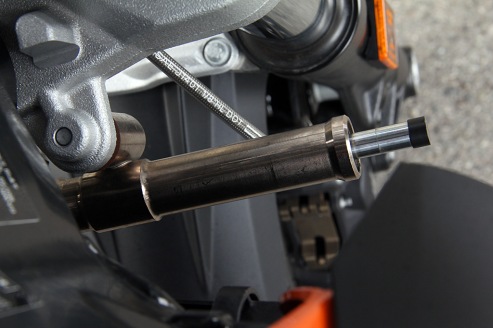 A Porsche Boxter crawls by, and it’s immediately clear where the F800R got its flat-brap soundtrack; the German idea of fast. It’s not the beguiling song, sonic drama or a whining in-line four soundtrack, the BMW F800R’s rasp of sensibility grating against its Urban attack visual design. Its hard angles rendered in slight curves, truculent looks wrapped around new-rider usability and cornering expectations coupled to linear stability. The F800R is a rolling contradiction, that works in a miraculously rideable way.

The power delivery from the 87 horsepower 798cc parallel twin is remarkably smooth and progressive, with good pull developing from low in the rev range. Passing 5,000 RPM there’s a fulfilling flow of acceleration and a bit of vibration. The power development is flat enough and controlled, but doesn’t goad you on or engage you overly either. So it’s not a hammer of the gods, but a more friendly interpretation of a street-fighter concept.

On fast flowing open roads the F800R sings, the non-adjustable front forks (yes, regular forks not a telelever) and stock steering damper coping well with uber-legal paces, even as cool fall-air flows smoothly over the fly-screen. Charge into tighter, rougher and harder to read turns and the F800R doesn’t feel so at home. The bike is light and easy to manage, but not quite as flickable in the corners as we expected. BMW seems to have opted for stability over nervous agility.

Our tester had a tendency to resist turning in, and once set in the corner if it was unsettled, the F800R had to be wrestled with a bit to keep on track. We suspect this is a function of the front suspension rebounding just a bit to quickly, so it’s good that the steering damper comes as stock. I never quite felt secure pushing the F800R as I have the FZ8 or Monster 696 in the past. The F800R is more stable feeling than the Monster 696, but isn’t as focused or precise feeling. For a new-rider’s bike though the suspension surpasses many entry to mid-range offerings.

Suspension adjustment on the R is limited to rear spring preload and rear rebound damping, both of which are easily accessible and dialed up without any additional tools. Overall, the rear spring is a bit soft for two-up riding, but then the passenger accommodations won’t have your girlfriend or boyfriend begging for a ride any time soon. Unless, it’s a look at us spin to your local bean-pusher.

The F800R has the looks of female bare-knuckle boxer or Russian gymnast, wrapped around a tranquil parallel twin. It’s a sensible engine, and there’s some bonuses with that. The with dimensions and weight near that of a single-cylinder the F800R is svelte. That lets you chuck and paddle the bike around easily. Better, the F800R doesn’t leave you weeping at the gas pump or wracked with eco guilt. This isn’t why you buy a naked bike, but that the F800R makes the most of the under seat 16L tank with 4.36 litres/100kms (54 mpg) is a nice perk.

Where the F800R shines, and where I expect it will see the most use, is in the city, as BMW’s slotted it into their “Urban” classification. The upright seating position and even power delivery make it a weapon of choice for slicing through traffic. For day to day riding I’ve walked right past teeth-shattering Ducati’s, grotesque adventure bikes, and crippling supersports. Though, you’ll want to pick up a courier bag, because there’s no room under the seat for more than papers. Yes, we figure only a courier bag will do, because you just don’t want to ruin the F800R’s looks.

A motorcycle journalist will look at the F800R and see greasy metal bits and body pieces lifted from the discontinued F800S, the F800GS and the F800ST, the world looks and sees something distinct and different… When they aren’t mistaking if for a Triumph Speed Triple.

I know this because people kept pulling up to tell me so. Cyclists, SUV drivers, other riders, and most notably a Lamborghini Gallardo driver. Not that it matters what Lambo it was, it was a Lambo. The window rolled down, and what followed was not gun fire but a complement. So what the BMW F800R is down on in terms of power, it’s making up for in class.

Visually and physically the F800R is small, to the point of feeling a bit twee. With a slight forward lean towards the bars that keeps you upright enough to keep weight on your wrists, you’re sitting on and upright compared to a sport bike. In my case, towering over might be the term. Nor is the F800R built to accommodate a size twelve on the left-hand side, where your heel interacts with the exhaust – it seems BMW has been taking notes from the likes of Ducati’s Streetfigher. The seat itself is well cushioned and comfortable, cupping your hind nicely to prevent you from sliding back during acceleration.

Glance down and there’s a reassuringly easy to read instrument panel, which with the headlights are common between this and the F800 and F650 GS. The R uses a more stylish white tachometer face, and where the gauges visually overlap the tack switches to black relief. A nice design cue, this area conveniently marks the RPM range of best power development. The gauges, protected by the optional colour matched fly-screen, are informative and feature a large new rider friendly gear-position indicator.

Beyond that I can’t comment on ergonomic considerations like the peg to seat height ratio, because our tester came equipped with the free low-seat option. This is BMW’s way of making me look like a 6”2’ clown on a trike. Likely those with a smaller stature won’t find this seat or the F800R a deterrent, and at a claimed dry weight of 177 kg, this bike is more approachable to new riders than the 10 kg heavier F800ST.

Fighting that inertia are the F800R’s Brembo’s Twin 320 mm discs with four-piston calipers in the front and a single 265 mm disc with a one-piston caliper in the rear. The brakes offer good feel, and the front takes well to aggressive riding. The ABS in the rear however tends to cut in early, but that’s in keeping with the new rider friendly feel of the F800R. What isn’t is that the ABS is an option, rather than a standard issue feature.

Compare that to any fire breathing monster sportbike on the market and on an economy of dollars to snarling power the F800R makes no sense what so ever. The reason you buy a bike like the F800R is not for what it isn’t, but what it is; different. The price may be similar to the competition, but the BMW carries with it fantastically coherent feeling, with enough nice touches fitting together harmoniously to escape the similarities to its F800 siblings.

Doubt it? Get off the bike, walk 20 feet towards the coffee shop and look over your shoulder. Parked, the F800R handsomely plays its urban hooligan role. Only you need know how kind cool can be.