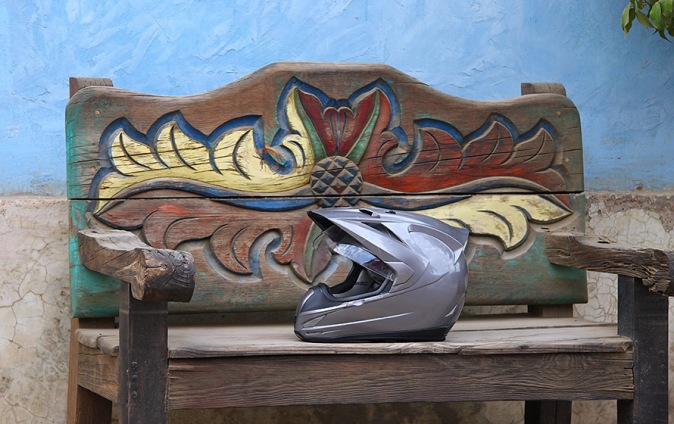 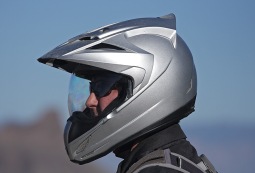 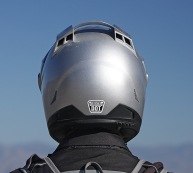 Ensenada, Baja and we’re riding out of town through a snarl of traffic whose philosophy is that each four-way stop is an excuse for a one block race to the next stop sign, and everyone’s attempting to capture the next pole position. If you’re looking for CNN’s reported Baja warzone this is as close as you’re going to get – traffic fueled by competition, machismo and a disregard for a vehicle’s residual value. In my peripheral vision, I catch a late-80s white Ford F250 cutting in on my rear quarter and take evasive action, score one for the Icon Variant helmet’s wide broad eye-port as el Fordo barely scrapes by.

Icon’s latest Halo-as-you-want-to-be “Urban Assault Helmet” offering, the Variant, is targeting the street market, but adventure riders looking at this lid will recognize cues from the Arai XD and Shoei Hornet DS. So taking the Icon Variant beyond the urban, how does it measure up? Over 8000kms of adventure riding from Northern California to the southern tip of the Baja and back is providing the answers.

In traffic the visibility provided by the Variant is a clear selling point, but low-speed air-flow isn’t. Despite removing the chin-curtain and fully opening all nine of the intakes the helmet is feeling stuffy in the heat at low speeds. I’ve resorted to riding with the visor open, with my sunglasses on (no goggles aren’t an option), but that puts the open shield right in my field of vision. The range of motion for the shield just needs that one extra detent to put it out of the way.

This has proven a problem on some of the more challenging dirt-road riding we’ve done on our ascent into Mike’s Sky Ranch; the low-speed technical portions that dominate the road nearing the motorsport Mecca had to be done with the shield up. Not to avoid fogging, the Variant’s anti-fog is some of the best we’ve encountered with moisture building up as sheen on the shields surface, but just for air-flow.

On the plus side though, I’ve not been a sweaty uncomfortable mess in the traffic and sand under the Baja sun. The Variant’s removable Hydradry moisture wicking liner is working exactly as advertised, transporting the sweat away from my skin and towards the venting. As we pick up speed on the serpent of Mex3 out of town, the sweat evaporates in the increased air-flow and the helmet comes into its comfortable and relatively quiet own.

Yes, quiet, used in conjunction with a visor equipped adventure helmet thanks to extensive wind tunnel testing and refinement. You won’t be throwing your ear-plugs away anytime soon, but subjectively we’ve found the airflow quieter on the Variant than other helmets in this class. Additionally there is minimal lift or pull from the visor while riding at highway speeds of up to 140kph… by 170 you’ll be hunkering behind the windscreen though. The only time you’re subjected to lateral torsion from the brim and extended chin of the helmet is in side winds, which is largely unavoidable with this design.

The benefit of the visor isn’t just an “adventure-y look”, as the peak keeps the sun out of your eyes in most riding circumstances and reduces glare, important in dusty conditions. As an example of the keen attention to detail in the Icon Variant’s design, the underside of the visor is coated with a matte surface ensuring it’s not reflected in the face shield.

By the time we’re riding out of Gonzaga we’re getting to know the Variant well. The dirtbikes coming up behind me, as I muscle the Varadero through what they consider fun and I consider sand, prompt me to drop the visor. The internal airflow on the Variant is such that I’m not inhaling a helmet full of sand and dust, but there is a light accumulation on the face shield after the seven bikes roost by. Cleaning the inside of the shield is a pain, the “quick change” shield really isn’t as it requires a small key or coin to pop the side-plate covers, unscrewing of a bolt on each side and “gentle release” of the visor from its ratcheting mechanism. The process runs about 5-10 minutes and requires a squeamish amount of force to remount the shield.

To preserve the antifog, it’s recommended that you only use water, a microfiber cloth and a solution of mild dish soap. Even then after 5000kms, we’re finding that the anti-fog functioning with only slightly less effectiveness in comparison to new, though it’s still miles better than Shoei or Arai’s offerings that do not offer a fog-free visor. The Baja dust and sand though has taken its toll with some very light hazing to the face-shield’s outside surface.

The dust has also worked its way into the mechanism that actuates the 10mm front intake vents on one of our helmets, leaving them slightly sticky. That will be remedied by a good cleaning – not merely by a riding in the rain “cleaning”.

Overall the Variant handles the wet well. The anti-fog keeps the face shield clear, even in near freezing temperatures as encountered leaving the Catavina Boulder Fields and crossing the twisting passes of the Sierra San Pedro Martir into El Rosario. Shivering and cold a quick pull off to the side of the road was in order to quickly re-insert the chin-skirt to cut the draft – a welcome feature.

The Variant wouldn’t be worth its light-weight in gold, if it weren’t safe. The Variant stacks up nicely; the outer shell is constructed of Fiberglass, Dyneema, and Carbon Fiber, which encases the interior energy-absorbing EPS liner. These and other engineering considerations sees Icon’s Variant meet or exceed DOT (US), ECE 22.05 (EUR), SAI (AUS), and SG (JPN) requirements. Fit is an important part of safety and it’s important to those ordering online that the Variant sizes on the large side. If you are concerned about sizing, we’d recommend trying on the lid at a local dealer and saving the hassle of a return – if they don’t have the Variant try on an Airframe, whose sizing is the same, before ordering. The head shape is longer and more ovalized (or deeper vertically) than most helmets on the market and if you’re used to buying Shoei go a size smaller for a good fit.

Over the course of 8000kms, and climbing, of use, what has stood out is the Icon Variant’s durability and build quality. The helmet is well fit together and finished, on a par with any of the Arai or Shoei helmets we’ve used or owned, and the feeling is one of a premium product indicating that Icon has broken free of its previous urban and inexpensive market niche.