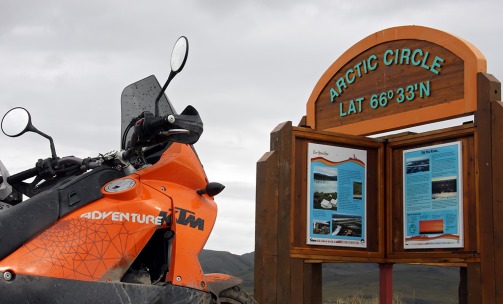 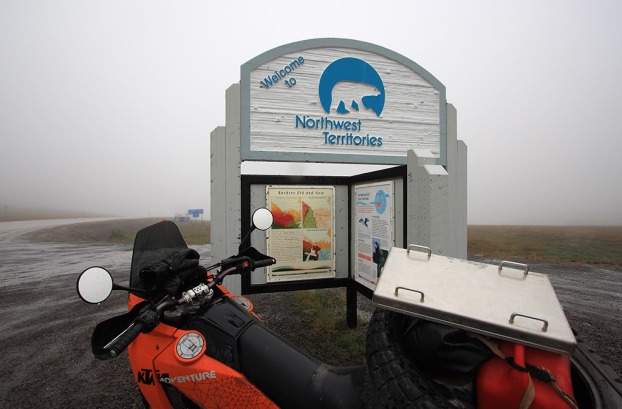 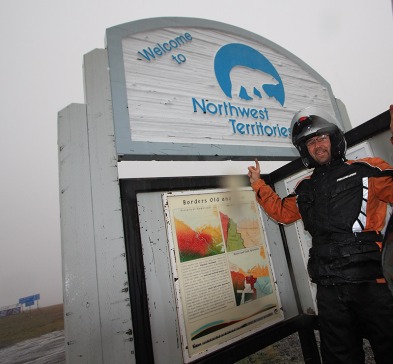 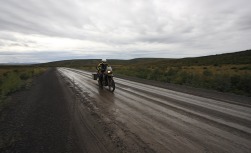 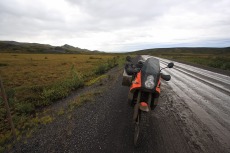 Nothing’s prepared us for this. Ahead of me Kevin’s rounded a corner and plowed into axle deep black muck at about 70kph, and nearly goes down not once, twice, but three times as the R1200GS Adventure slews from one side of the “road” to another. Or so it goes in the retelling, because I’m too busy struggling to keep the fully loaded F800GS upright to watch the show.

At Midway Lake, my entry speed into Hell’s own Construction Zone is considerably less. I’m not suffering an overabundance of confidence, and I don’t labour under the delusion of being an off-road master. Not that it would matter; nothing works.

A hint of throttle, even with feet down as outriggers, and the F800GS slides out sideways beneath me. Any kind of speed and I’m tobogganing uncontrolled through the tractionless black sluice, front tire plowing and sliding, rear end stepping out, and stomach knotted in terror.

For all the world it looks like the construction crew heard the five o’clock whistle, slid down the tails of their Fred Flintstone machinery and left the road incomplete for the weekend, which would be a foot deep emulsification of black clay, gravel and evil. Nature took the liberty of adding water.

Yesterday, the Dempster received us with an easy mist soaked ride. It was a trap. While we slept at Eagle Plains, it rained – at times so hard that the downpour woke me.

Come morning, there was a break in the wet, but menacing black clouds to the north-east that had locals sucking their teeth and asking, “Are you sure you don’t want to wait a day.” It’s Glenn’s gung-ho self-determinism that pushes us onwards into the rain, mud boiling up from our rear tires like smokescreens.

By the Arctic Circle it’s predictably cold and wet, and it’s clear my heated vest isn’t working, but if we’d wanted warm we’d have adventured in Moab. We look at the sign, celebrating our accomplishments too internally for Kevin’s liking.

There is a tiff and some upset as three very different personalities and communication styles attempt to find harmony on a road intent on discord. The temperament of the ride, the road and the weather degrades. The rain’s efforts to wash us away increase by the kilometer, as does the road’s slickness. Eventually Glenn gives up, he’s on the KTM which doesn’t suffer slow speeds gladly, feeling clumsy and heavy below 80 or when coddled, but consummately confident when ridden with lunatic fervor.

Glenn fades into the distance, and now Kevin and I are locked in. We can’t turn back, because no matter how bad the road becomes we have no idea if Glenn is upright and unharmed ahead. So we press on.

The road requires total concentration; anger at Glenn’s departure is pushed to the side, emotion stripped away leaving a Zen-survival state. The moment you waver, the moment you falter, the Dempster asserts its dominance. You must stay calm, stay relaxed and hold this Mud-Beast’s gaze.

We ride this monster’s raised spine; the Dempster sits on a gravel berm, 1.2 m to 2.4 m (8 ft) high, to insulate it from the permafrost’s effects. The rest of the Dempster’s construction is like a Monty Python skit.

“Hello, I’d like to build a highway.”
“Yes,” responds Cleese as the government official, “and what did you have in mind?”
“I was thinking of building it out of mud.”
“Ok, I’m not sure we can give approval for that, what’s going to be under the mud.”
“Well, there’s not much else around, so I was thinking some more mud and then maybe some mud mixed with ice. Occasionally some sharp pointy rocks and some clay when I can find it.”
“Oh, right, that’s fine then. Does it rain much where you’re going to build this?”

For a motorcycle in the rain, the road’s construction is no joke; the Mud-Beast is an overwhelming foe.

I falter five or six times in the slick mess of a road. The worst of which sees the BMW F800GS slither across from one side of the road to another and back again in slews of muck and desperation. In a last ditch effort, I shoot a foot out with enough force my hip hurts for the rest of the day and add the gas.

We are haunted by fog crossing into the Northwest Territories, which mixes with driven horizontal rain to keep our photo-op and the border brief.

As the cloud layer falls to the road, in the helmet, the merest exhalation clouds my visor. Despite the sting of mud and rain there’s no choice but to ride open faced; I would kill for goggles, until I find that by inhaling deeply, then exhaling slowly through my nose I can control the fogging.

Once up to speed, turning my head sends brown droplets sailing across my field of vision like a flock of light brown birds. The Dempster, our Dempster, has been a creation of rain, freezing, fog and mud – a tunnel vision of light brown with green to the sides unnoticed. A grizzly could be tap-dancing in a top hat and tails roadside, and I wouldn’t notice, my focus is on the discernment of mud in all its permutations.

The surface is a constantly changing menace full of counterintuitive lessons. What look like darker solid patches of mud, are actually traps that sink your front tire. The bike’s knobbies rip down through the thinner, watery gruel, down to the elusive taste of traction beneath. The best though is the delicious grip of loose gravel spread thinly across the surface. The ride is a concoction of greasy moments, sideways slides, and gut wrenching slithers as the Mud-Beast tries to shake us from its sweat-slick back.

There is a rollercoaster of ravines and creek crossings. Water running down both inclines, to pool in a slurry at the bottom. Downhill, the only option for maintaining control is to add fuel and momentum to the mix, praying you plow through with only a sickening slide at the bottom, and power up the far side. Nature continues to add more water and you repeat, occasionally facing the additional challenge of a curve thrown in at the bottom of the hill.

It is grueling, challenging beyond anything I’ve ever ridden, exhausting, cold, and wet, but I’m humming and grinning like an idiot. You could ride this road a thousand times, and it would be a different adventure every time. Today it’s the Mud-Beast, tomorrow it could be whipped by wind, covered by August snow or even sleeping like a benign beast in the sun. But, it is, overwhelmingly an adventure, something that offers achievement and gratification beyond any other type of riding I’ve tried.

Then it’s our Sargasso Sea of black muck construction. It diminishes the Mud-Beast’s assaults and affronts to child play by comparison. Slick black clay of the Ogilvies? Drenching muck thrown up by passing tractor-trailers? Shards of shale? That was the small stuff. The construction zone has me praying to gods I don’t even know I have.

And then we’re through – I still have no idea how. This brutally ugly, brilliant ride has authored the single most rewarding moment of any motorcycle experience I’ve had.

In Fort McPherson tales filter back to us of Glenn, he’s caught and joined a group of Italian riders who left Eagle Plains ahead of us and made himself a local phenomena by bursting into song celebrating surviving the ride at the Co-op. It’s a relief; we’d been riding with half-an-eye open for Glenn and the KTM in the ditch.

It’s not an unwarranted concern; in the NorthMart the manager asks us, “Could you have picked a worse day for this?”

At least the “easy stretch” is ahead, but the Mud-Beast isn’t out of tricks. Fourty kilometers south of Inuvik a shale-sharp fang slashes the rear tire sidewall on the big Beemer with predatory thoughtlessness.

“I could hear the air rush out! PHSHHHHHHHHHHIIIITTTTTtttttttttttssss. And the tire pressure warning light on the cluster was flashing wildly. It was nice and controlled coming to a stop though, even in the mud.”

Roadside, we realize that tire changes are predicated on us being a whole team, the KTM has the power adapter for the tire pump and is far ahead with Glenn.

A couple of vehicles stop, offering assistance iterate our options. We’re confident in our technologies though, firing-up the Sat-Phone to call BMW Roadside Assistance and arrange for a tow rather than wrestle with the mud-covered bike in the downpour and endless gray twilight on a day where temperatures have reached as high as 6 degrees Celsius. Except, both batteries fail instantly despite the rental company’s guarantee of both coming fully charged.

Another pick-up stops, the driver asking if we need help – a matter now open to some debate. Mud covered, sopping, tired; we’re mustn’t look our best and the driver offers Kevin a slice of pizza. Kevin, demurs, says, “I could really use a hot coffee.”

The man thinks for a moment, and then passes a hot cup of java out the window.

Clocking a buck-ten at the tail end of the great Mud-Beast, I run as fast as I dare the 40kms to Inuvik for help. The F800GS and I shudder across a series of potholes, mud splashing up and over its front beak and my visor.

In a useless action I try wiping mud from a visor, so grimed and scratched I can barely see though it, my glove so covered in mud all I accomplish is a peanut butter smear. Ironically, it’s easier to keep a visor clean in a driving rain and I can’t help but grin – this is the first time I’ve wanted more rain today.