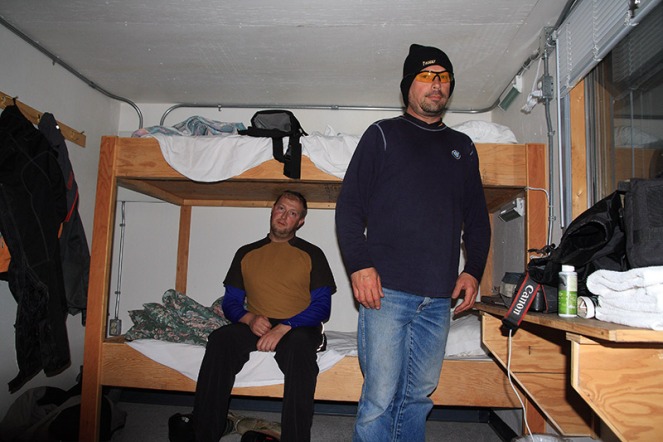 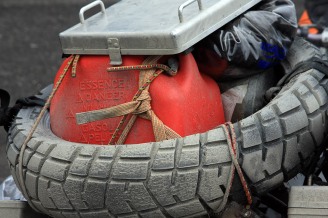 The mandatory gas can. 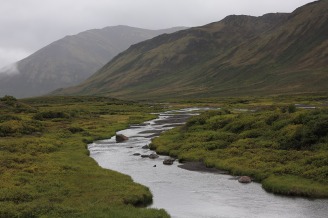 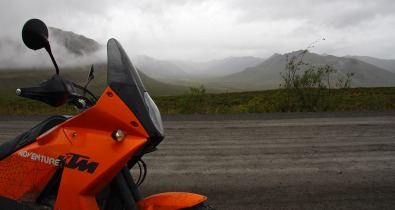 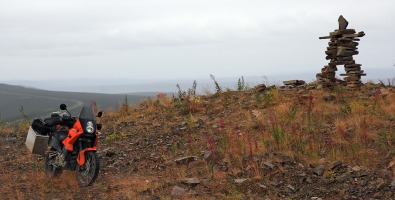 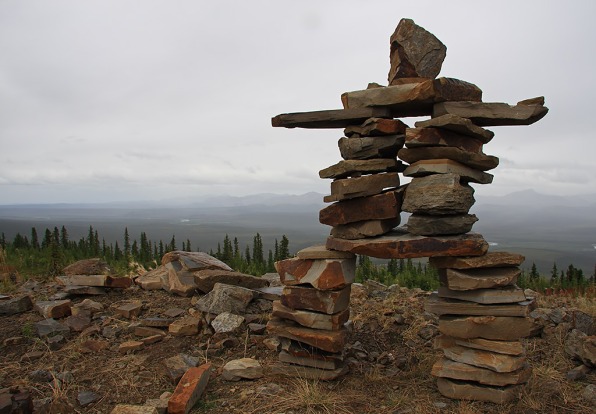 Passing the Tombstone Mountain campground, my concerns and discomforts are stripped away. The shoulders of the mountains are cloaked in mist, a light rain falls, the shrubs are verdant, and ice still kisses the edges of a small lake pooled in permafrost ground. Everything here is sculpted, rounded and shaped by wind, ice, and cold – mountains, trees, bushes… We are on the Dempster Highway, riding northbound out of reality.

My boots are taking on water; every shift and brake of the BMW F800GS seems to fuel an osmotic pump action, sucking more moisture out of the saturated air. We’re headed for the Arctic Circle, that the rain is cold seems a given. It doesn’t matter, the soul of this place, the spectacle of it, distracts from such banalities – even the crick in my neck from sleeping in the work camp “overflow” bunks at the Klondike River Lodge.

The Dempster Highway is one of the most valuable spots in the world, a spare place nearly free of people, and yet still accessible – relatively. By the term “highway”, don’t confuse the Dempster with the paved varicosities that strangle our modern world. A product of its environment this is a filament of the south sent out like an infection, and the land does its best to fight it off.

You can’t pave the Dempster, the topmost permafrost beneath it softens and buckles in the summer and in winter it freezes and heaves. The surface is composed of the highway’s surroundings, dirt, gravel, tire slashing shale, clay. It can snow in July. It can be impassible due to spring break-ups ice and debris on the rivers blocking the ferry crossings. The Dempster is a fickle beast; changing year-by-year, day-by-day, and hour-by-hour, even minute-by-minute at weather’s whim. Solid surfaces being transformed by a single hard rain, into motorcycle challenging muck.

Today is a moderate day on a good year and the Dempster has the temperament of a well packed but wet dirt road. That’s a relief, because last year when I attempted this ride it was not a good year.

The scenery is unrelenting. High passes over rolling mountains, constantly transitioning textures to the road, and a haunting thought, we are privileged to see this. It so easily could have not been so.

At the Klondike River Resort (“resort” is used as provisionally as highway) back at the Junction of Yukon’s Klondike Highway and the Dempster, Kevin expressed his concerns, “Does this strike anyone else as stupid. We’re riding out in heavy rain, on a bad road.”

In the motorcycling community the Dempster’s mythos is deep rooted in such ventures. Reaching the Yukon you become part of the rumour-web tying riders together. We pass word on, like old time messengers, of each other’s triumphs, defeats and injuries. The Dempster is a 760km long story machine in the summer, one that trades heavily on its danger to coax adventure riders from across the globe.

As we strike North, the rain transitions from heavy, to moderate, to drizzle and finally even patchy glimpses of sun. There’s been some slippery mud, but nothing insurmountable, and nothing to match the soul of this road. We pull off to an overlook, spanning two valleys. Atop it are two Inukshuk.

Glenn looks me in the eye, “I just about cried back there. The scenery, and then August Rush came up on the iPod.” Few roads do that for a rider, few roads in North America put you in contact with such unspoilt territory or humble you with hard questions.

“When do we get there?”, becomes, “Will we arrive?”
“Should we stop to make sure the car at the side of the road…?”, becomes a non-question, a rule of Dempster etiquette.

“Should we stop for gas?”, becomes, “Will we make it to the next gas stop? And is there enough gas in the jerry can for two bikes.”

The latter question is moot. Kevin’s pulled the BMW R1200GS Adventure for the day and with a tank range of 600+ kilometers the bike doesn’t sweat such things. For the other two bikes, the 370 kilometer jump from the Klondike River Lodge at “Mile 0” to Eagle Plains is more of a challenge.

It occurs to me a little more than half-way through the day’s ride, that the BMW F800GS could theoretically reach Eagle Plains without the hassle of a gas-can fill up, if I were to ride the bike with a little care and only a moderate number of passes for pictures and videos.

So suddenly I’m not just facing the Dempster, but the self created challenge of hyper-miling the F800GS. That’s lead to some decidedly unjournalistic in-helmet chatter, “Come on Kilter! You can do it.”

Yes, I talk to our test bikes, and have even named this one. Kilter is thus named, because he’s had a hard life as part of the BMW Offroad Demo fleet and his bars are a little off kilter.

Easy on the gas, just cruising at 90kph along the Dempster, the little F800GS is getting 3.2 L/100km. On the downhills, we’re getting to 2.1 L/100km. Uphill we spike to 4.9L/100km. Lightened by the lack of fuel the F800GS’s suspension is unloaded in the rear, and the bike is pogo-ing over the ruts and rocks packed so tight into the dirt road they’re like cobblestones. The spare tire we’ve brought repeatedly hitting me in the back like a massage tool for giants.

Then there is a glorious moment, Glenn on the KTM 990 Adventure with its 19.5L fuel tank pulls to the side, the F800GS with its puny 16L tank sails past. The speedo switched to a countdown of kilometers left of fuel, by its count I’ve 5 kilometers to spare. I give the F800GS some gas, and celebrate in the Eagle Plains’ gas station parking lot… alone, then again when the others arrive.

Today, this section of the Dempster has been a benign and kind beast, it’s built our confidence and given us a sense of security. This road isn’t to be trusted, but that is what gives the highway its adventure rider allure. Tomorrow is the ride to the Arctic Circle and beyond to our north most motorcycle destination of the tour: Inuvik.