Not even I should be able to get lost on PEI.  At 224km long and 64km wide, lost takes a lot of doing on PEI.  And yet here I am, subject of my own refusal to u-turn, on a red dirt road that the GPS shows as “almost” connecting to the 13?  Or was it the 2?  Or the 225?  So then, the Ducati Multistrada isn’t an adventure bike…  PEI’s dirt roads, a vivid surreal clay red that V. van Gogh would approve of, say otherwise.

As navigation goes it was straight forward, cross the Confederation Bridge from New Brunswick and follow the signs across PEI to Charlottetown.  Then I looked at the GPS when I should have been taking an exit.  I’ll blame it on the bridge; “the longest bridge spanning ice-covered water in the world” says the tourist literature.  No doubt, the 12.9km span is an inspiring piece of engineering. The marketing could use some work though, “Longest bridge, shortest distance”, seems a pragmatic and prosaic slogan.

More high school social studies, how I hated it then, floats to my mind’s surface as I thrum through the gravel. Confederation, in the Canadian context, is the 1867 union of Ontario and Quebec (then the province of Canada) to New Brunswick and Nova Scotia into the federation of Canada.   The Bridge’s name then, isn’t a reference to that union, but the idea itself.  Confederation had its start on PEI, and the Bridge, beyond being a damn cool “look that’s a lot of water down there” ride, has taken to the conceptual heart Canada’s history. 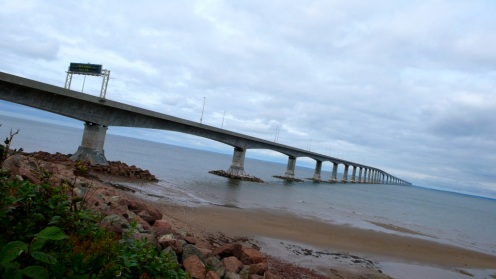 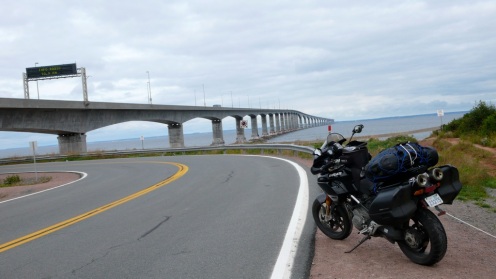 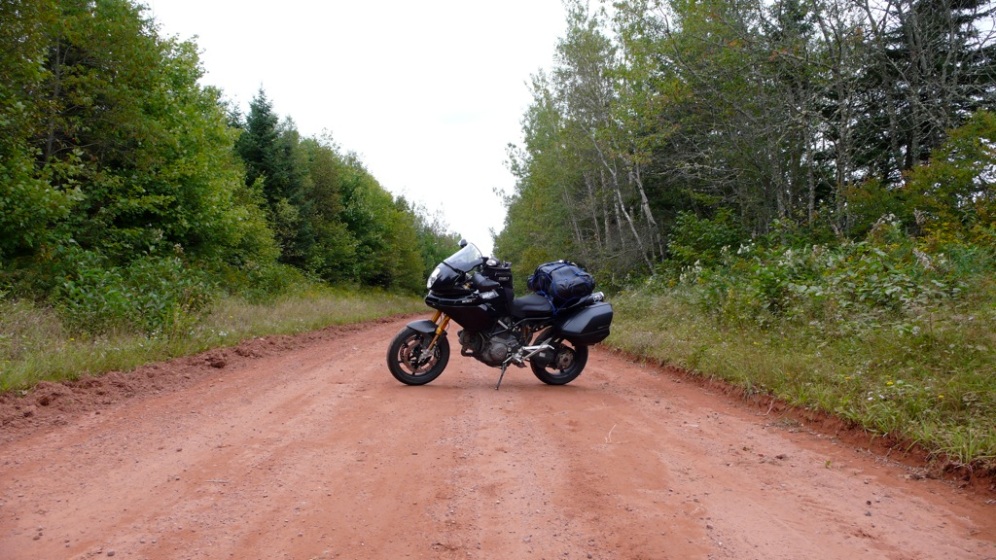 Are you paying attention Mr. Johnston?  No high school lesson here, the front Avon pushing sideways in gravel, a surface it was never meant to attempt.

My cover it all off-road solution is stand up and more power!

This is not serious dirt work, but it would flummox a sportbike to a crawl at points.  The Multistrada is happily thrumming along in the 60kph range, give or take.  A pity Ducati never produced the rumoured adventure version of this bike; longer travel suspension, meatier tires and some offroad pegs and the around the world potential is clear.  Not to mention an easy grab for the blossoming adventure market – a lightweight counterpoint to BMW’s gargantuan GS.  Oh, and then I could take a short day in the saddle and turn it into a long one – as if I’d not succeeded with that already.

The road pushes through, and I’m back on track, the Termignoni exhaust trumpeting my arrival to Charlottetown.

What’s your idea of opulence? The Great George ticks most of the checks on my list.  I’m shown to my room by one of the staff, and I can’t help but joke, “I don’t think it’s palatial enough.”  The suite, a quarter floor of a townhouse, could easily pass for a posh studio apartment in Vancouver – though I’d likely skip the faux marble pillars by the two-person Jacuzzi tub.

Asking after dinner, I’m directed to Gahan House (126 Sydney Street) located just around the corner from the stately Wayne manor.  If there’s one thing the Atlantic does well, it’s comfort food, and if there’s one thing PEI does well it’s potatoes.  So there’s an option for fries with everything, but buttered chicken over fries?

It’s not a flavour combination that ever would have occurred to me, yet the decadent goodness of it all is gone in minutes.  There is no hope of my waistline surviving this trip, and adding insult to caloric injury are the fresh cookies in the lobby back at the Great George.

I linger a while.  The lobby is pure Agatha Christie sitting room, scatters of wingback and loveseats creating conversational spaces. In a secluded far corner two government types are chatting quietly over office politics.  Wheels within wheels and politics within politics – no shock we’re a mere block from Province House where the Charlottetown Conference was held in September 1864 and the idea of Canada had its inception.

Read and Watch the Entire: Ducati: Many Roads of Canada Series