Percé, Quebec, no bones about it; this is a tourist town.  A main drag composed of hotels, restaurants, a lone gas station, and a grocery store.  Tasteful signs entice you, the more desperate simply beg for your attention.  At a glance Percé could be any other tourist town, save for the French signage, though other towns put on such airs – I’m looking at you Solvang, California with all your Danish.  Saving Percé is a coastal splendour that would make a landscape painter weep with frustration at being unable to capture its grandeur and subtlety, and an amazing driveway.

Highway 132, entering Percé from the North, is a rollicking convolution of pavement.  Technical, and made more so by rough and patchy pavement, the 132 is perfect territory for the Multistrada.  The bike gambols, flicks, and flits through these curves and between the dangers like a clown prince of the Ducati line.  Aircooled L-twin sawing though petrol and the world with a dynamo of torque, and superb Ohlins suspension rising to the challenge of keeping the bike connected.

A series of moments so perfect they require repeating… three times.  I needed to get the shots for the video, honest.  The things I do for you people.

I’ve not talked much about roads this ride, perhaps a pleasant relief for those more travel-oriented who’ve joined us of late, because I’d never envisaged this trip to be a blow-by-blow account.  Obviously there are some that merit exceptions.

I overshoot Percé, pressing on in a rush, only pausing to take in the view of Rocher-Percé (the pierced rock), a massive arched sandstone monolith rising out of the Atlantic at this tip of the Gaspé peninsula.  The prow and flank of a massive tectonic vessel moored at sea.

The next few towns have an industrial edge, a more downtrodden feel, none of them draw me.  They are not the trip this should be and 40kms later I find myself u-turning, riding back to Percé.

The evening light fades, washing the Rocher-Percé in the setting sun’s red spectrum.  Somewhere I’m sure a man behind an easel cries, “No!  No! No! No!  I just had it.”  I snap a picture, knowing it won’t do the spectacle justice, and then embrace the tourism ethos of the place.

The irony of inedible fish and chips at the edge of the ocean, the incongruity of blue neon signs, and waking up to a view of a piece of real-estate that would make a Bond villain say, “There, yes, right there.  That’s where the citadel should be built.”

He’d have it wrong, I decide over a hot mocha and a fresh chocolate croissant at the Boulangrie le Fournand, the view is better from the land. 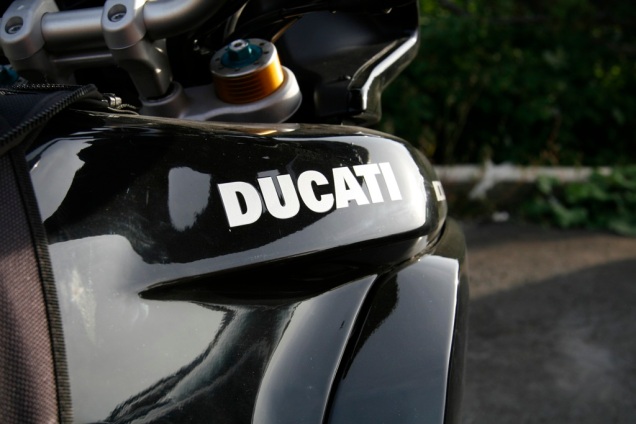 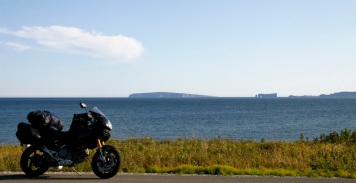