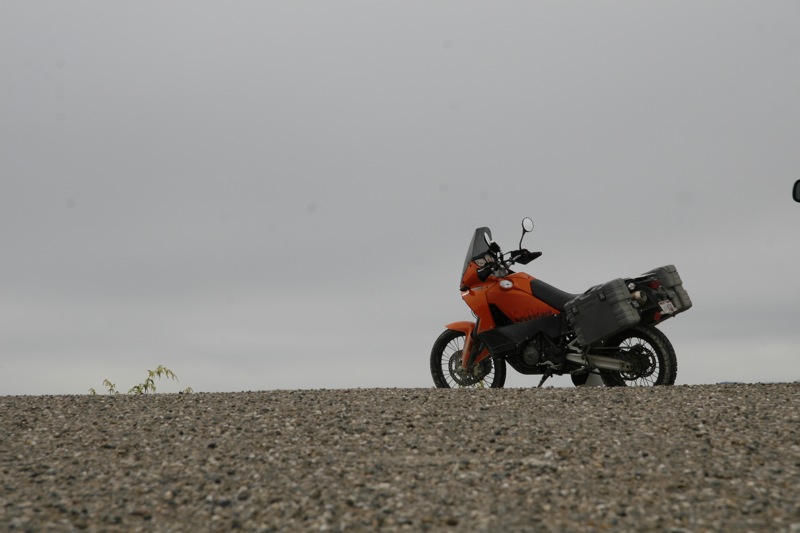 I’ve spent the past five days alternately enjoying the Dawson Music Festival and waiting for a break in the weather.  Here in “the Land of the Midnight Overcast” I’ve been taking in the sights, the music, the hospitality and a few drinks in the beer swamp.  Beer garden is too pristine and dry a term.

There’s a unique mix of musicians from local talent to the Sadies , a new personal favourite Torngat , and the single-named Haden, whom a fellow journalist professes having a man crush on.  I believe that’s similar to a “bro-mance”, but didn’t delve for details.

The festival has been lent a proper Glastonbury feel of mud covered upbeat decadence by the rains.  Though there’s a lot more of an indy, folk and country edge here.  Still the crowd has adapted, with more than a few taking up mud sliding as a new sport.  It’s slick soupy stuff and I suspect that the only people who want the drizzle to stop more than the motorcyclists and festival organizers are the cleaning staff of the town’s hotels.

Dawson is a unique mix of the historical and living.  Historical town sites, like Barkerville, suffer from fighting to preserve history with every moment.  A struggle to create stasis in a modern world, through hired actors playing historical roles and museum like curation.   Dawson is freer, more sparkling and alive than that, a free flowing mix of history and the modern in the swirl of a living town.

During the “Songs I Wish I had Writen” session at the local Anglican Church, Aaron Burnie lets an achingly poignant ballad of loneliness written from the perspective of an elderly spinster wash across the audience.  Here a man with a banjo, dressed in the Dawson uniform of plaid flannel, gum-boots and a trucker’s cap, and drawing “The Old Maid’s Song” across 200-years and misting every eye and soul in the house. 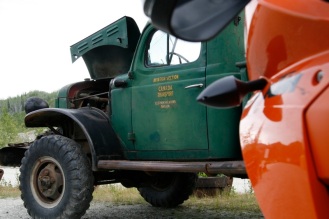 The mix can be less successful; the artifice of the Westmark Hotel simply rankles.  Scratch the historic veneer and Holland-America’s mass-service tourism industry is revealed.  An intruding profit-tropic dollar-phage infecting Dawson like a soulless creeping infection, the rooms are thoroughly modern, and well appointed, and like stepping though the door a hotel room any other city.  This isn’t any other city though, this is Dawson, where time seems a “wibbly-wobbly-timey-wimey-mass” to quote the Doctor (Who), and such disingenuous places leech at this town’s soul.

I return to the Aurora Inn for another two nights, waiting out the rain.  Swiss chalet decorative sense and precision is smoothed by warm and personable Yukon hospitality manifested not only in the level of care but caring.  You slip on the provided Crocs at the front door to keep the floors clean and simply make yourself at home.  Bruno, which I infer from observation is the primary operator of the hotel side, has me wheel the KTM around back between wings of the building to keep it safe and out of sight.

Carol heads up La Table on 5th, the restaurant adjoining the Aurora.  Lightly formal, I sample the Arctic Char from the menu.  Two days later I return for the herb encrusted rack of lamb. Either meal would be generating lineups for any metropolitan “it place”.  Ah, yes, roughing it in Dawson then.

What really sells me though, is the fresh croissants, the centre piece of each morning’s continental breakfast. My heart is won and stopped by their buttery goodness simultaneously.

On July 22nd my birthday present is a cloudy morning and a sunny afternoon, perhaps the Dempster Highway’s mud and clay surface will dry.  A few sunny days and it could be an easy run to the Arctic Circle, or as easy as such things are likely to be.  In the sun I elect to ride the “Top of the World Highway” to the Alaska-Yukon border, collecting the west-most road accessible point in Canada for the KTM 990 Adventure’s credit.

Returning to town, the weather is holding, and after dinner I stop at Bombay Peggy’s.  Torngat has stayed in town after the music festival and are playing this tiny space.  The effect should be cramped, but instead is intimate.  Those listening, calling them an audience is too distant, are a mix of locals, musicians from the festival, and a few tourists.  Note to the two circuit boys, plucked eyebrows and D&G stand out like a sore thumb in this sea of flannel.

Torngat ’s whimsical melodies recall Cinematic Orchestra and dashes of Radio Head, augmented by a liltingly drunken French horn.  It could be entirely at odds with the surroundings, but all seem rapped and swaying to the soundscape adding to the growing theme – history as alive and fluid permeating the modern.

By morning the rains have returned, their efforts seemingly redoubled.
Thanks to:
KTM: http://www.ktm.com/KTM-com-Ready-to-Race.1.4.html
Alpinestars: http://www.alpinestars.com
Tourism Yukon: http://travelyukon.com