A Steer Among Cows 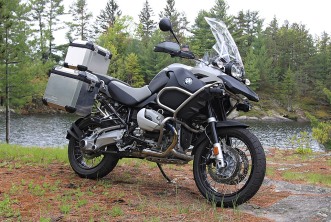 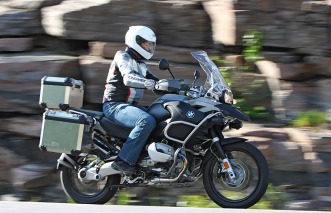 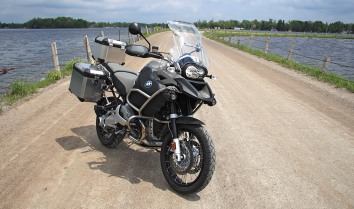 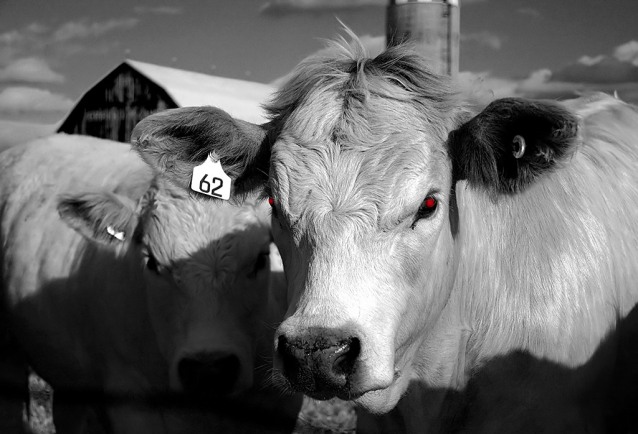 So things got a bit punchy, but the R1200GS Adventure was the only bike to merit a nickname during our survey of Adventure Touring mounts over the course of our recent Ontario visit. That’s a distinct honour in our books, as well as a fun term of endearment. You just wouldn’t nickname a Varadero for example.

The R1200GS Adventure, however, has character in spades; the huge upper body mass of the 33L tank makes the meaty suspension look a bit spindly and the whole thing comes off a bit bovine. Meanwhile the rest of the bike’s look asks, “What bike do you want to ride before, during and after the Apocalypse?”

The biggest problem of testing this bike alongside the Honda Varadero and Triumph Tiger 1050 was just how easy it was to default to it – for myself anyways. At 6’2” the R1200GS Adventure’s 910mm seat height, roomy ergonomics, and well-executed windscreen aerodynamics gave me a taste of what so many others experience daily… a bike that fits.

Even despite a scrabble to flat foot the R1200GS Adventure and needing a step-ladder to mount, it Photographer Kevin Miklossy’s first comment pulling out of BMW Canada’s parking-lot in Whitby, Ontario was, “I could go around the world on this.”

Where do I sign up? This is the worst bike in the world for me to test after reading Long Way Down on the plane. Ewan McGreggor’s and Charley Boorman’s recount of their ride from John O’Groats, Scotland to Cape Agulhas at the south most tip of Africa, inspires dreams of adventure with every high-kick over the Apocalypse Cow’s seat. Before being washed into the wilds on a wave of mid-life crisis, a bit of house keeping.

You’d be forgiven for not noticing the R1200GS Adventure’s updates under the gently re-touched bodywork. The 1170cc horizontally opposed twin cylinder receives 5% boost in horsepower bringing the max up to 105hp via an increase in the compression ratio. Enough for BMW to say something was done, but not enough to spoil a solidly working recipe.

We’d sooner have seen a bump in torque, which is a more useful figure for a bike likely to be loaded to the gunnels with pillion and packing. Still the Adventure spins out a respectable 85lb-ft/115Nm at 5,750 rpm, up 250rpm from last years model. Combine that slight bump with a smoother shifting gearbox with longer ratios and the engine feels like it needs a hint more spin up to hit the bike’s grunty get-up and go range, with a brapping-mooo from the exhaust.

Upshifting and downshifting reveal the heavy-duty nature of the R1200GSA, with a tectonic clanking of metal plates accompanying each shift. The six-ratio gearbox is a noticeable improvement over last year’s bike though, with false neutrals having been completely banished and shifts feeling slightly lighter.

A quick clank of a downshift and passes are executed with proper dignity, made better by the fact you can see over the traffic by standing on the pegs. Just as likely you’ll cruise along at highways speeds in 6th gear and a smooth 4000rpm taking in the scenery – an experience near completely unhampered by the road conditions thanks to the biggest upgrade, the ESA (electric suspension adjustment) making its first appearance on an “enduro”.

At a stop in neutral you can select street preload settings for Solo rider, Rider with luggage and Rider with passenger. Additionally there are two off-road settings, Medium Reserves and Maximum Reserves. On top of that you can adjust the damping rate on the fly from the EAS button on the left hand switch cluster – Comfort, Normal, or Sport settings being available. That might not sound useful, but once you use it you wonder why ESA isn’t all the rage.

Pavement shattered and frost heaved? Switch off to 70’s Cadillac soft comfort mode. Rolling along smoother highways? Normal gives good ride and handling. Need to keep up with your riding buddies in the twists? Thumb the ESA to Sport and terrify the local sport riders. We’ve said it before, but it bears repeating; the GS Adventure handles in ways a two-story building was never meant to.

Swinging through the twists the BMW R1200GS Adventure is light and sure if a bit detached as a function of the long suspension travel and Telelever suspension. You can trust it at a full lean. Skirting the edges of its narrow’ish rear 150/70 R 17 Bridestone Trailwing the R1200GS Adventure certainly fills the rearviews of bikes ahead with menace.

Offroad the Apocalypse Cow remains a handful. At a wet weight (including fuel) of 256 kg before taking luggage into account, this teuton tower requires good planning and a tactical take on off-roading for a dirt neophyte like myself. Ample bar lock and excellent fueling make u-turns a breeze, but you’ll want to avoid any situation that sees you needing to paddle the GS Adventure backwards.

Not to say it’s not capable, the R1200GS has me running the shoulder in a spray of gravel, wheeling over Canadian shield outcroppings to perfect lake view photo vistas, and standing tall on the pegs climbing gravel embankments in no time. It’s delightfully empowering to look down dirt roads, wonder what’s down them, then go and find out.

Confidence is bolstered by the improved brake set up. BMW has ditched the whining servo-assisted brakes with their binary death grips on the rotors for a more conventional manual system. The system is called semi-intergal, meaning that the right lever operates front and rear brakes but the foot lever only the rear – essential for off-road riding. As is the ability to switch off the ABS and new anti-slip system for those who feel sliding a rear wheel is mandatory under power or braking.

You certainly have the range for such explorations. Ridden with a modicum of second gear wheelie popping, a good number of sprints through the corners and way too much city traffic in the mix, the R1200GS Adventure delivered fuel economy of 6.3L/100km (37.33 miles per gallon).

The clear instrumentation gives you the range countdown, along with a suite of other functions, ticking down from around 600km until you’re digging your hiking boots out of the luggage. These bins are watertight, hugely functional and offer the arrow dynamic concessions of a Borg cube ship. Our only complaint was that the top box lacked a backrest for photographer Kevin when he rode pillion.

In the details the 2008 R1200GS Adventure only sees minor updates, but BMW’s delicate touch is well chosen. The R1200GS Adventure remains the flagship of a growingly diverse line of adventure touring options. With the advent of the new F650GS and the F800GS, BMW has filled out nearly all strata of the market, so why mess with a good thing.

Swashbuckling gleefully through the twists, the R1200GS Adventure’s holistic and satisfying feel doesn’t beg update… it just stokes dreams of round the world tours and life on the road. Ah, to terrify entire countries astride the Apocalypse Cow, there’s something worth putting ordinary life on pause for.

For Pricing and Options go to: http://www.bmw-motorrad.ca