Meet the brand new 2008 Honda Varadero… Except it’s not. Honda introduced the Varadero to the European market in 1999, the bike arriving at the Adventure Touring party well before the hosts put out the plastic cups. Indeed, Canada gets the second generation of the 996cc v-twin adventure bike, which received smoother-styling, fuel-injection and a sixth gear back in 2003. The problem is that the Adventure party has been in full swing for a while now, meaning the Varadero is up against a fresh batch of capable and diverse competition.

Named after a Cuban Vacation resort town known for all inclusive hotels and lines of pale, fleshy, ungainly tourists wrapping themselves in sloth and consumption, the Varadero could be one of Honda Canada’s most important bikes. It’s the first Honda Adventurer this side of the pond since the Trans-alp for one. For two, Honda Canada is importing the Varadero without waiting for Honda USA’s approval, acknowledging that the Canada market has different requirements. That’s a daring corporate move.

If Honda Canada is successful in asserting its autonomy, there is hope of further Honda offerings coming to Canada without the Americans’ blessing. Think Trans-alps, Deauvilles, CB1000Rs, Hornets… It’s a heavy burden for this respectable, well-tempered, staunchly usable motorcycle to carry.

The first top-heavy flop into a series of turns in Niagara’s wine country reveals the Varadero’s distinctly old school feel. Despite the stability provided by the long 1,560 mm (61.4 inches) wheelbase, tipping into the turns is light and easy largely thanks to the wide bars and the narrow 150/70R–17 rear tire.

The Varadero more falls into turns rather than elegantly transitioning, likely owing to its whopping 276.7 kg (610 pounds) weight, including all fluids and a full 25L tank. Compare that to BMW’s R1200GS Adventure at 256 kg (claimed) while packing 33.0 l of fuel, which is oft decried amongst Adventure riders as “too heavy”. Indeed the only thing heavier than the GSA is it’s price.

With the Varadero’s weight comes Honda’s feeling of solidity, a sense that if you can’t get around an obstacle you could plow right through it. Useful because grab the brakes and the combined braking system (CBS) with ABS feel soft and wooden attempting to halt the Varadero’s SUV-like inertia.

Coming across as solid is a neat trick given a number of the components seem picked from the bargain bin. The bars, dash’s black textured plastic and the switchgear look painfully dated. If Varadero is in communist Cuba, then by analogy this bike is the colourless architectural block of a Russian embassy to the country’s colourful samba of culture.

Plowed through the bushes, the pug-nosed and sag-bellied Varadero couldn’t come out any worse. There are plusses to joining the aesthetically challenged ranks of the Suzuki V-Strom and Aprilia Capo Nord though. You’ll feel safe while camping because looks like this keep predators at bay. Commuters will never shed a tear if the Varadero is knocked over in a parking slot. Adventurers won’t sweat the scratches – they might even give the bike character. You won’t balk at drilling holes in the fairing to install additional fog lights or other farkles.

Yet, success is a subtle thing, and the Varadero wrapped in an overwhelming selection of competencies is unquestionably successful at its soft-Adventure task. This is the comfort of a good solid stew, the heartiness of meat and potatoes; Senior Frog’s rather than the street cart out front.

The suspension is soft and compliant, more a wafting float over the troubles below you than the connected ruckus of feel most road riders are accustomed to. That’s thanks to the 155mm (6.1in) travel of the 43mm front forks. These un-adjustable units are soft yet manage to resist the overt diving many big trailies suffer from. The rear shock complements the front with 145mm (5.7in) of travel, remotely adjustable preload and adjustable rebound damping. That’s a big deal for those riding two up or with the Varadero’s optional hard luggage. No sense in crossing the country without the essentials after all.

The benefit, even the worst of roads are smoothed out as you float along taking in the scenery. Even as a passenger only the vilest road evils jar you.

In terms of handling the suspension suits the Varadero’s purposes just fine. Provided you don’t upset the it mid-corner, the Varadero feels firmly planted, harmoniously linear, and utterly predictable.

The Varadero is to the VTR1000 what the V-Strom is to the TLR1000, the recipient of a pounding beating sportbike heart tranquilized into muscle flexing relaxation through the fine art of detuning. Or better put, re-tuning with an emphasis on midrange and a disregard for horsepower.

The 996cc V-Twin is no longer an emotive and visceral experience; instead it’s a slick and smooth torque wrench that never reveals any strain or stress. The useful power starts at 2500RPM gliding the Varadero off the line and slipping it through traffic. By 4500rpm there’s proper pull, and from 5500-8000RPM full on grunt squats the big trailie on its suspension and vibration strobes through bars and pegs. The engine will spin beyond that, but the power drops off and there’s not a lot of point.

Out on the expressways, the Varadero is glassy ride-all-day smooth at 4,000 RPM, with passing power only 500rpm and a throttle twist away. That could make for a deceptively quick crossing of the country all executed in exceptional comfort.

The all-day every-day ergonomics are comfy as warm slippers. The bars are positioned for upright relaxation. The weather and wind protection from the fairing is ample, the handguards add protection and keep hands warm. The windscreen unfortunately is a weak point, matching the V-Strom’s for ineffectiveness. Any speed past 100kph, accost your helmet with ongoing buffeting. At 838 mm (33 inches) the broad supportive seat is a tall perch, giving tall riders ample legroom and shorter riders a reason to think “platforms”.

Luckily for the short, the Varadero has ample bar lock, excellent balance and adroit fueling making U-turns and other slow speed maneuvers an absolute doddle in the seat or on the pegs. This translates well to the world of dirt.

The Varadero will never inspire you to “Dakar”, but it will open Canada’s web of gravel and dirt roads to you – just not in “hardcore” style. The ABS can’t be deactivated and the linked braking limits off road pretensions.

The Combined Braking System ensures that the rear brake lever operates the centre piston on each front caliper, meaning the foot lever gives some braking on the front wheel as well. There are times offroad where having independent control of the braking is mandatory… if only dragging the rear on steep “I bit off more than I can chew” downhills. These features mean the Varadero is still more tarmac than tundra.

Where the Varadero really shines is the city. Ratting though the streets of Toronto, firing between trolley lines, optional Zumo GPS guiding my way, linked braking keeping the bike settled and ABS at the ready the Varadero reveals practical European commuter bike flair.

Yes, I used flair and Varadero in the same sentence. Every competency the Varadero offers, including the useful rear-rack, make it as great an urban assault vehicle as an Adventure Touring tool.

There are two major problems the Varadero faces by making a late entry into the Canadian market. The Honda is coming into the Adventure Touring class populated with bright and modern luminaries, the KTM 990 Adventure and upcoming 690, BMW’s F800GSs and F650GSs, Suzuki’s V-Stroms and even the more road oriented Triumph Tiger for example. Any one of these selections instills passion that the Varadero, composed primarily of “old and older”, lacks.

Here’s a question though, in a country dotted with small towns how many are likely to have a BMW dealer and how many a Honda dealer? Whipping along the back roads, which would you rather own – tried, true and predictable technologies or brand cache? These are questions prospective Varadero owners will be asking themselves, and rightly so.

Clouding this logic slightly is the fact that the Varadero will only be available at Honda Powerhouse Dealers. Lest internet-forum panic ensue, Honda Canada’s Warren Milner assures us that service, parts and warranty will be available at any Honda motorcycle dealer.

Price is a more thorny issue. At $13,999.00 MSRP the Varadero with linked braking and ABS commands a premium in comparison to its closest competition, the $11,999.00 Suzuki V-Strom 1000. While the V-Strom lacks ABS beyond that the two bikes are directly comparable in terms of capabilities and fit. Except the V-Strom has a fuel gauge, an unforgivable oversight on the part of Honda for an Adventure Tourer. Worse, for those brutally honest regarding their off-road aspirations, the road oriented Triumph Tiger offers fully adjustable suspension, a rich character filled engine, comfort and a sporting demeanor for $13,999 (MSRP). Shop around and you’ll even find dealers like Toronto’s RevCycles who are throwing in factory hardbags as a bonus.

That sort of competition has left the Varadero with a very big hill to climb. Something the Varadero will undoubtedly do with quiet confidence, all of its well-proven parts working together in the quiet harmony – the Zen-master of Adventure Tourers.

Core to the Varadero’s public perception is the problem of the lazy reviewer’s language – taking the easy out painting this bike as bland. There are no epic poems to all-round above average performance. Sonnets were never penned to those of just average looks. Fishermen never tell of the one that fit the large’ish frying pan just right. The Honda Varadero reminds us how valuable solidity, comfort and usable around proficiency is, and how high functioning this class of bikes has become. How, in a market swamped with brash character and cache touting bikes, the 2008 Honda Varadero’s subtle charms can win a critic over into thoughts of country-crossing adventure. 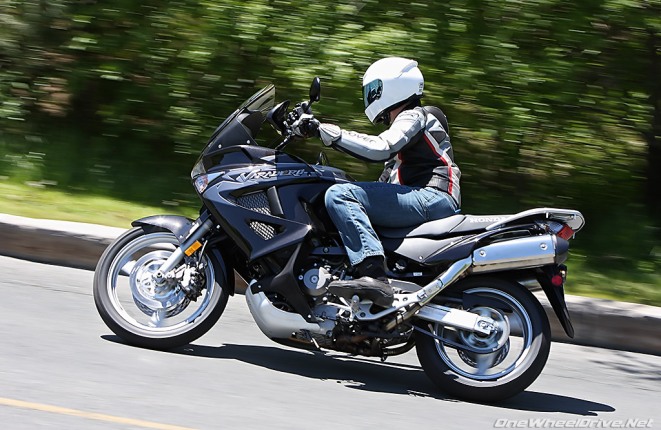 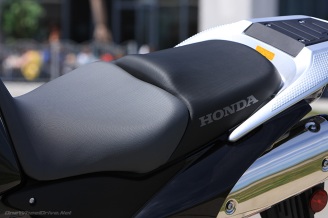 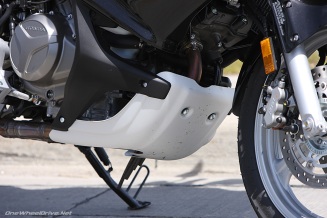 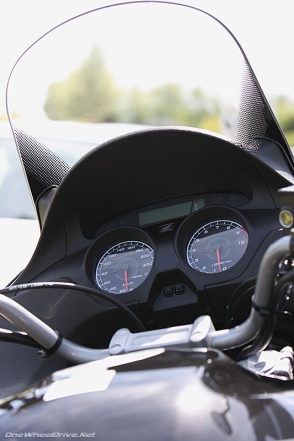 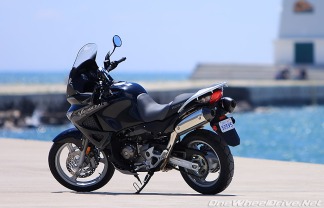 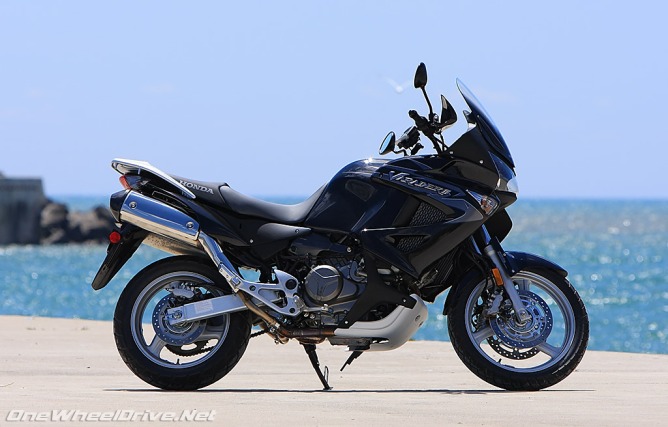 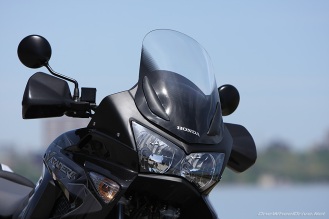