Skip to content
In Oliver, BC., at a local sportbike rally it’s incongruous that the motorcycle drawing the most attention is not amongst the flocks of GSX-Rs, fleets of CBRs and flights of R1s, it is a cruiser. Okay, it’s not that big of a shock – the 2007 Suzuki M109R LE, resplendent in a blue metal fleck paint job complete with “Cobra” inspired white racing stripe, has been drawing crowds for the last two weeks. The bike is a looker, no doubt… but what’s really caught the ride group out earlier today is that this “cruiser” is a mover too.

This morning as the intermediate group sportbikers queued up behind road tester and photographer Kevin Miklossy for a “moderately fast” ride of Okanogan back roads. You could see a few eyes roll the obvious thought being, “Oh, great! We’re stuck behind the ‘cruiser’.” I’m making air quotes around that last bit. 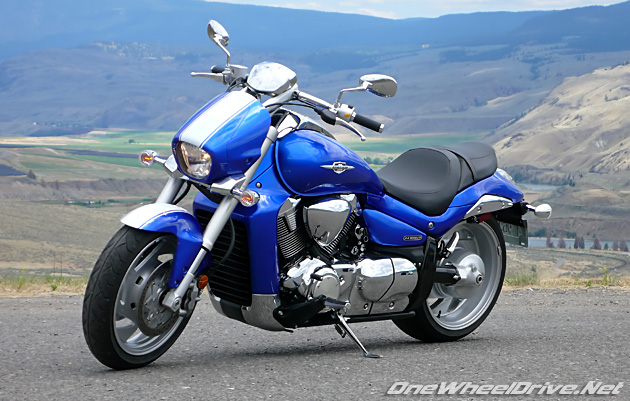 Suzuki M109R LE
Kevin’s first few passes spread the group out, but it’s not until Green Mountain Road that the ride truly begins. Rough and scarred, the run off of Highway 3 is a challenging and technical series of turns and bad sight lines. It’s taking the M109R’s harsh suspension to the limits, but even watching from in back you can see how much the M109R takes to being pushed. Kevin confides later, “I really opened it up a couple times, but the only one keeping up was the guy from Vancouver Island on the R6.”

Like the kind of man’s-man you love to hate the M109R, has it all – looks and performance.

When we first rode the M109R we found that if you ride it like a sportbike, throw your weight around, shift your shoulders, and push the bars with near violence this bike handles like no other cruiser we’ve ridden. Nothing has changed, the harder you ride the M the better it gets… until you run out of clearance.

The heels of your boots grind away – early warning for the scraping pegs soon to come. The road kisses the edges of the massive 240mm rear Dunlop. The free-revving 1783cc short stroke twin sings to its 7,500 RPM red line and beyond to the limiter’s surge. Grab a handful of brake lever and the GSX-R derived system scrubs speed with a zeal that gives a start to the riders behind you.

“Oh my gawd, it’s gorgeous.” Mic is immediately drawn into the look of the bike, but how will the M109R treat him and his, er, 50’ish body, on a longer ride? We head out to the “corporate retreat” outside of Kamloops, to find out.

By the time we’ve reached Hope, B.C. Mic’s verdict is in on suspension, “Overall it’s good, but it has a tendency to transmit the rough sports and cracks in the pavement directly into your back. I think they tuned the suspension more for handling than for a soft ride in the rear.”

“I’m still shocked that this bike is as comfortable as it is though. Just look at the riding position.” Mic is right, the seating position is pure forward hunched “custom”, it should be crippling but it isn’t…

Not to say there aren’t a few ergonomic woes. The tall rider in the group I find the M109R’s seat, as broad and wide as Midwestern plains, makes the upper part of my ass go numb after a half hour riding. Kevin at 5’10” adds that he gets sewing machine leg from the foot forward pegs when pushing it, “My legs are too short I guess.”

The Fraser Canyon and its sweepers await and Mic on the big-twin thrums through at a good pace. Following the M109R through the tunnels north of Yale the bike sparkles and shimmers in the amber light while the sound is subtle, bass and sporting – keep your big twin thump, in comparison to this it seems boorish. Does the M109R need aftermarket exhaust? I’m hard pressed to think so, on the bike it seems as loud as Suzuki could make it and still get through emissions regulations.

At a rest stop in Spence’s Bridge we stop in the low light to talk over the bike and snap some photos.

Mic, a dyed-in-the-wool touring rider, is taken with the M. “It just eats the corners. I’ve avoided testing bikes more modern than my own because I don’t want to know how bad the handling on the PC800 is. So great, you hand me a cruiser that just rails though the corners. Thanks! You complained about the M wallowing, but you don’t know wallowing. There are places where I’d have to slow to 80kph on my bike and it would have been bucking all over the place. On this, 120kph no problem – faster even…”

Yes, faster indeed as Kevin’s antics and my own ride experiences prove.

“There’re other things too. We hit a strong crosswind coming out of Hope,” says Mic, “and the M feels nearly immovable. I feel like a bobble-head on the dash of a ’67 Caddy. I’m pushed around more than the bike. A small windscreen would be good; by 120[kph] the wind is constantly trying to push you off the bike. Cruising at 110 the equilibrium is near perfect.”

Traffic slows as it passes the M109R, it’s not that they want to, it’s that they are blinded by the glare of all the M109R’s chrome. Mic looks at the bike glimmering, “Do you know a bike detailer? If you owned one of these you should just buy him.”

Not to cut the M too much slack based on handsome looks, there are a few minor issues. The digital tach, mounted on the bars, is front and centre, while the speedo is mounted on the tank. This betrays the M’s sporting aspiration, but angle the speedometer back a couple of degrees and it would be much more readable. The low speed fueling is still miserably jerky, hard on and off the transmission. Paired with a heavy hydraulic cable actuated clutch [thanks to the folks from M109Riders for catching our typo – Ed.] and the M109R’s hefty mass makes for difficult parking lot maneuvers. These are small things in the face of a bike whose competencies overwhelm.

Save for a few minor tweeks and a new paintjob little has changed on the 2007 Suzuki M109R. Should Suzuki have messed with a obviously winning formula, or has the company learned a lesson in leaving “fantastic” enough alone? As Mic puts it, “I’ve walked by this bike at the motorcycle shows saying I’d never buy something ‘like that’. Now I’ve got to eat crow.”