Back in 1971 Shirley Bassey was singing “Diamonds are Forever” and Ducati had just released the GT750, a product of Fabio Taglioni’s (Dr. T’s) prediction that motorcycle displacements were on the rise. The engineer took Ducati’s existing SOHC, two-valve, single-cylinder design, bodged it to another and voila, the first Ducati 90-degree L-Twin. The GT750 inspired motorcycle history; Cook Nielson reviewed one for Cycle in 1973 and by 1975 he was racing a Ducati 750 SS (California Hot Rod) leading to Ducati’s first AMA victory in 1977 – placing the Italian mark firmly on the map. Before you start pining for “back in the day” though, you’d best meet the remake of the bike that started it all… the 2007 Ducati GT1000.

No huge strap-on substitute beast here, the GT1000 is as clean and simple as the original, though likely a good bit more comfortable. Softening what was a 70s hard-edged sport offering, is the standard’s archetypical form – upright and relaxed ergos. Pierre Terblanche has done a fine job distilling the essence of the original GT (with a touch of the 80s’ Darmah perhaps) and mixing it with a modern feel and technology without overweening mimicry of the original – an act that reveals his understanding of design and engineering. The result is a bike that cheerfully gets on with its business of being one of the least pretentious, most comfortable Ducatis out there, while leaving room for another part of the brand’s culture – customization. 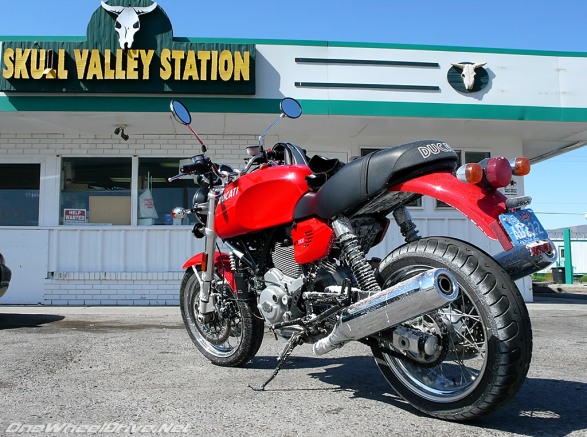 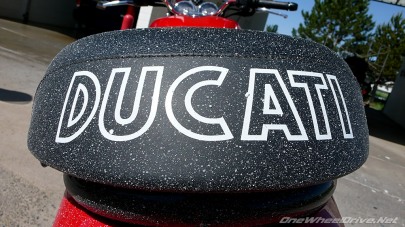 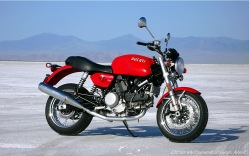 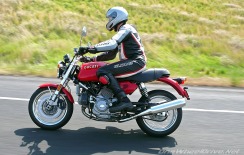 A set of Termignoni exhaust to uncork the engine’s pompone beat is on its way for our long-termer, and the GT1000 begs for bar end mirrors rather than it’s current inelegant chrome antennae. Taking the GT1000 to a recent track day (no, you’ve not read wrong) the sensible standard looked fabulous without the rear-views. It also performed remarkably well.

Admittedly photographer Kevin was being a bit daring, “It wasn’t so much hanging off as standing off the side of the bike.” The GT was keeping pace in the fastest of the lead rides at Ducati Northwest. The tires came back nicely chewed to the edges, the grip having provided ample proof that the Pilot Classics are as much go as show. Not that most GT riders will subject their bikes to such abuse, but you could and the original GT would be proud of that – it never shied from away from the track.

Touring is also an option, I road our previous GT1000 loaner from Vancouver, B.C. to the Grand Canyon. The sole flaw with this endeavor lay in the GT’s aerodynamics… there are none. A 14hr day at 120kph plus speeds leaves you worn from the windblast – an optional Ducati windscreen is on the way for our long-termer.

Out in the twisties the GT shows its handling lineage. The other sport classics handle well, but with their planted heavy feel they are nowhere near as carefree and manageable as the GT1000. The wide bars provide leverage, while the upright position provides better sight lines, indeed this cheeky little ride responds best if you ditch the knee-out poserism and just push it down into turns with a bit of shoulder shift. Don’t let the vintage look of the twin shocks out back fool you, they’re well matched to the rigid trellis frame and well sorted for most ride conditions.

If there’s beef with the GT it’s that the front end tends to feel vague and the un-adjustable Marzocchi forks tend to bounce, especially over rough roads. Of the 1981 Darma 900 SD Cycle reported, “Remember that corner you hustle through on your favorite back road ride, the one that has the bump by the apex and crack out by the exit? Dive into it on the Ducati and you’ll swear those obstacles have disappeared.” With the GT1000 that’s not quite the case.

We suspect this is down to the chassis the GT shares with its sport classic siblings, the Sport1000 and Sport1000S. These bikes have a forward weight bias – placing your weight on the bike’s front end (primarily via your wrists thanks to low clip-ons). On the GT1000 the wide bars and upright seating position moves weight back and off the front, as a result the bike is more susceptible to upset – leaving you wishing that Ducati performance supplied a steering damper… Unfortunately, they don’t. Still, having ridden “distance” on all the sport classics, I’ll happily sign up for the GT1000’s comfort any day.

A proper standard, the GT1000 compromises nothing in the way of comfort with its sensible seating position – it’s downright human. The handlebars are wide and relatively flat, and absolutely coddle sportbike inflamed wrists. The seat is broad, plush and flat. The pegs are low and only moderately back keeping your legs at a relaxed angle – I’ve been to far less comfortable fine dining establishments and there the view never changed.

Looking for things to complain about? It’s a stretch but the trailing edge of the tank’s knee cutouts connect with your inner thigh – maybe sculpt it a little softer and narrower next revision? It’s a naked so there’s the standard windblast neck fatigue. And I could care less, because after long days of seeing the scenery on the Grand Canyon tour I didn’t need the hot tub afterwards, while the sportbike set could hardly walk to it.

To do it again though I’d have ditched the sportbikes and taken nothing but back roads at a sub-luminal pace. This is where the GT1000 thrives, throwing you 30 some years down a time tunnel to a time when bikes weren’t a matter of the latest electrickery, wind tunnel testing and a lust for power that makes most arms races look away with shame. Except the GT stops to take the best of modern fitments along the way.

The lone headlight has surprisingly good intensity and throw to it, and if needs-must you can adjust it on the fly… just reach over the bars. Twin chrome horns are two-tone and supply a shout out in marvelous harmony that belies the bike’s size. The classic rear lamp/indicators are easily visible, no wafty low output 70s’ bulbs here.

The Marelli fuel injection feeding the engine is crisp and smooth through 45 mm throttle bodies, replacing the ’72 Dell’Orto 32mm pumper carbs and their fiddly tuning.

Reliability? I’d be hard-pressed to hop on a 70s’ bike and ride 5000km with a toolkit consisting of an unidentifiable spanner thing, a loop of wire for locking your helmet and a Ducati kickstand plate… the last of which was optional. Nor could I find a place to stash spare parts and oil. It’s a good thing then that the GT’s engine is about as tried and true as they come, having been around in various incarnations for 16 years since it first powered the Sport 900.

Some things don’t change; Cycle wrote, “ To call the Darmah’s powerband wide is practically understatement. It gives you the choice between two gears – sometimes three – for a given situation.” Pleasantly the shame holds true of today’s GT1000, the marvelously flexible L-twin feeling perfectly at home in these trappings.

Feel like a top speed run? Flat to the tank the engine furiously turns the speedo to an orange-jumpsuit fast 190kph/119mph in short order. That might evoke a girlish titter from the sportbike set, but in the full gale blast alive to the world, real riders know it’s the experience not the speed and the GT1000 provides experience in spades.

Hauling you back down from speed are nicely modern floating 2-piston 2-pad calipers clenching the twin 320 mm semi-floating discs up front; the right lever’s power being exerted though steel braided lines. The feeling is good and not overpowering. I feel no inclination to complain about a lack of fidelity to the original GT750’s single cast iron front disc and one twin piston caliper. Out back with a 245 mm disc with 1-piston caliper to balancing the equation, you’ll not be missing a single leading shoe Grimeca rear drum brake. You’re bound to the road by 180/55-17 rear and 120/70-17 front Michelin Pilot Classics on glittering spoked, chromed steel rims – all the better to admire around town.

Which brings us to the city, an environment the GT1000 seems eminently suited to. Upright you see everything going on around you. The nippy handling, thank the leverage of those wide bars again, that did so well in the twisties translates to an ability to flit, filter and flick that Ducatista-urbanites will put to good use darting merrily though traffic. The torque-rich engine, providing pull from a mere 2000rpm, keeps shifting through the slick 6-speed transmission absolutely minimal – fine by me. The wet clutch, while lighter than its dry predecessor, can still be a traffic workout. More important is the underlying nature of the GT1000; a carefree attitude that makes even the sortie of Vancouver’s rush hour good fun.

At a relatively egalitarian $10,495 USD ($12,995 CND) the 2007 Ducati GT1000 is a lighthearted romp through time and the local roads. A standard, it’s not too much of any one thing, there’s visual charm, a beguiling engine, good handling, excellent comfort, a hint of romance, thankfully that’s all buttoned up in modern components and reliability. Out on the road the iPod has just served up Shirley Bassey, this time she’s singing “History Repeating” with the Propellerheads. It’s a catchy balance of the new and old, just like the GT1000.