Watching the Dakar Rally I know the special gene that urges a man to self-flagellate across a desert for a month is missing in me. I respect these, and other, skilled dirt riders in a way reserved for potentially dangerous asylum escapees, because they inevitably suggest “locking the rear tire”, “giving it more throttle” or “going limp when you fall”. All acts I associate with sending thank you cards to the local E.R. staff. With my learning curve to “hard core” “sicklier over with the pale cast of thought”, I am a softroader. The intrigue of gravel is access to vistas and destinations unattainable by road bike, and if I can do it without being paddled by a plastic plank impersonating a seat so much the better. Now there’s a new option for civilizing the wilds with the introduction of BMW’s G650X Country.
Right off, the G650X Country invokes a sense of civilizity. Gliding along forestry roads the Country’s retro-touched modern edged looks invoke thoughts of a scrambler more than an enduro. You just can’t help thinking leather helmet and goggles. This bike simply charms while it comfortably unfolds an unpaved web of back roads and some of BC’s most scenic destinations.

Despite a diminutive appearance the Country’s ergonomics are relaxed comfortable and upright. The plush seat comes in two heights, 840mm/33inches and 870mm/34 inches accommodating a wider range of rider statures. That sounds like smaller riders will be scrambling, but the Country is narrow, slight and claims a road ready weight of 160kg, making for an easy to manage package both on and off the pavement. 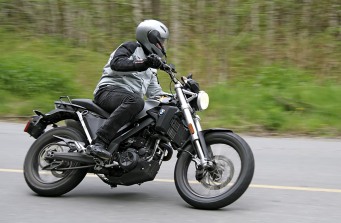 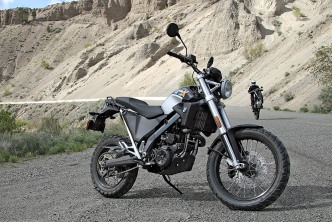 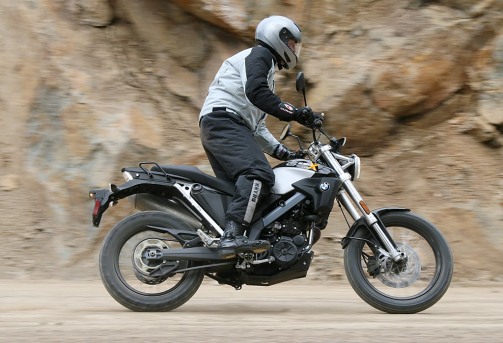 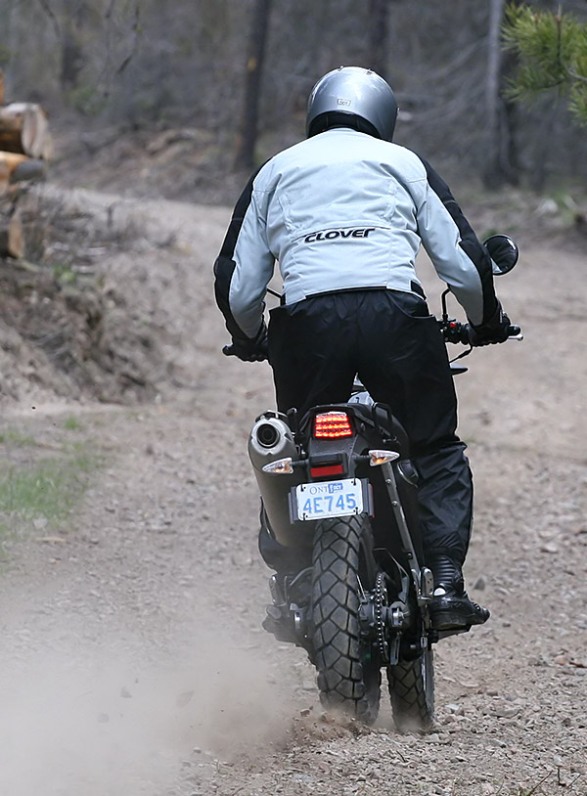 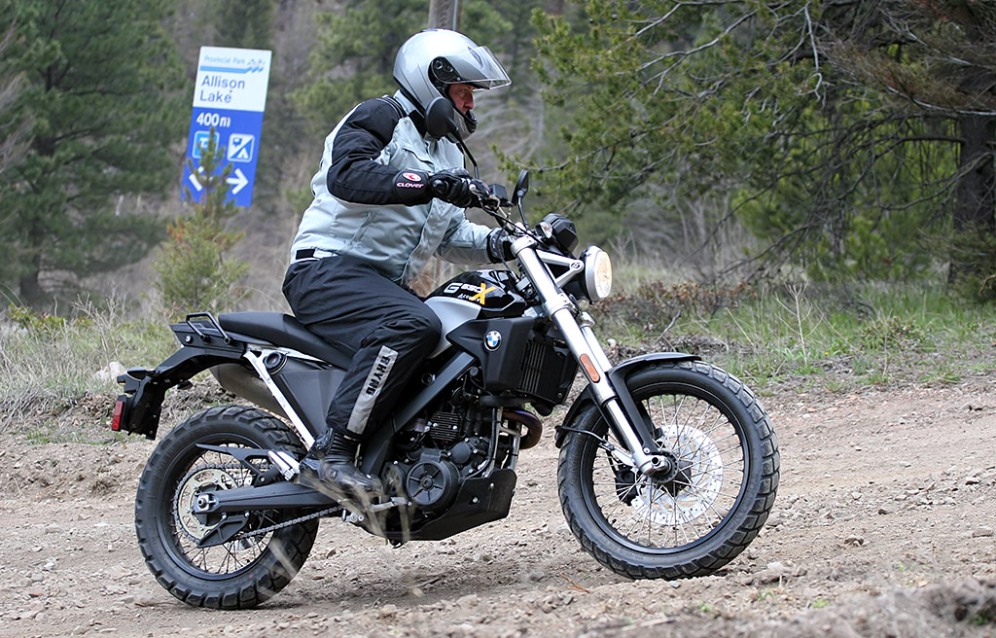 A low center of gravity is aided by stashing the 9.5 litre fuel tank along the bike’s right flank also sweetening the handling. Visually this placement leads to the Country’s quirkiest design point, the near absence of a traditional “gas tank” in front the seat – instead there is vestigial mimic in the form of the airbox.

That airbox, larger than on the G650’s F650 precursors, plays an integral role in the rework of the 652cc Rotax produced DOHC engine. In combination with a redesign of the exhaust, a lightening of the flywheel and a trimming of the 280-watt alternator, the gutsy single potter is considerably freer revving than its predecessors.

Benefiting from exquisite fueling and throttle control, the 4-valve single pumps out a claimed 53 horsepower and 44 lb-ft of torque spread evenly across the rev range. The result is as eager as a puppy and just as willing to play, without the unreliable piddling on the shop floor. A tried and true engine this single is unlikely to let you down in the woods or the city.

The engine provides province-crossing smoothness with a light thrum from 90-110kph, thanks to a balancer shaft calming the cylinder’s quivering. Additionally, muting the vibrations are weighted bar ends and rubber padded foot-pegs, which leave the Country feeling much smoother than the Challenge, though the mirrors are prone to vibration. Push hard and you certainly feel the single thumping madly through the seat and pegs even as you’re surprised at the engine.

The G650X Country will happily shoot along gravel roads at 100kph, the inverted 45mm Marzocchi forks providing 240mm (9.5 in.) of travel and feature adjustable compression and rebound to smooth your ride. Out back the Country forgoes the Challenge’s air damped system for a traditional hydraulic oil and spring Sachs shock with some 8.3-inches of travel. Scrambling along the Duffy Lake Road’s fractured and heaved pavement that travel was enough to keep 200lbs of editor from bottoming out even on the worst wallows.

On gravel or pavement the Country’s short first gear gets you off and away with little fuss, followed by a quick upshift into the taller second. The 5-speed gearbox is slick, smooth and positive though the throw between gears, particularly 1st and 2nd, is fairly long. Paired to a light cable-actuated clutch lever, the transmission occasionally false neutrals between fourth and fifth gears by hard fast up-shifts – but hard isn’t this bikes forte so that’s hardly a concern.

What the ‘box could use is a 6th gear. I seldom noticed the lack of a sixth on highway transits with the Challenge, but the Country had me fishing for another ratio periodically. This is a trade-off though, the more street oriented Country feels punchier and quicker to speed than the Challenge despite BMW claiming they are running the same gear ratios. It’s a difference that might be attributable to the Country running tires that are an inch smaller in diameter effectively lowering the gearing.

Oh, look marmots! The G650X Country’s braking is up to the tourism challenge. Steel-braided brake lines give good feel as the single 300 mm disc is bit by a dual-piston floating caliper up front, while in the rear is a 240 mm disc gripped by a single-piston floating caliper. In emergency traffic situations the brakes may come across as soft, but on the gravel it feels just right and balancing out the equation is the optional ABS.

Can you weight safety? At 4.49kg/3.3lbs the optional ABS inspires both on and off road confidence. On the road, playing in the streets of the buzzing Metropolis of Merritt during a prolonged rest stop, I had ample time to test the system. You’ll be daring if you can actually invoke a chip from the front tire under the management of this system.

The Country, being a dual sport, allows you to turn the ABS off by holding down the shiny red button on the left hand switchgear for a couple moments at a standstill. After playing with the system in the dirt and gravel, and being a “softroader”, I eventually just left the system on despite the marginally increased stopping distance because it’s just good fun!

Build up speed and slam on the binders, the ABS is unfazed by gravel, potholes and washboard, bringing you to a skid free stop. For a new rider or only occasional gravel rider this system lets you be fearless about the brakes, building confidence and control until one day you’ll eventually turn it off… or you can just keep slewing to a halt and giggling like a 10-year-old in your helmet – heck you can even feel socially responsible about it.

Be it back road idling, light highway duty, or full throttle scratching through the twisties the G650X Country’s frugally sips from the 9.5L/2.5 gal tank with an average consumption of 54 mpg. Look at that number again and you realize that this bike practically hugs the trees as you ride along the dirt roads.

We’re nipping through the tight twists of Finlayson Arm Road on Vancouver Island, and BMW’s G650X Country is perfectly at home. A narrow rear tire makes for quick turn in, a long rake makes for good stability and a thrumming little single is providing surprising punt on these tight roads. A patch of gravel passes under the tires but the Country holds its course, no surprise there because as we traversed BC over the past three-days it’s seen more than that.

The Country, having shorter suspension travel and shod in road oriented Metzler Tourances, feels much more like a conventional bike than the Challenge. On the road this bike feels quicker and easier through the corners. That limits its true offroad capability, leaving the rough stuff to its sibling the Challenge, while the Country is a happy denizen of fire and logging roads as well as town – slap a fly-screen on it to improve the negligible wind protection and call it the City.

The Country is appointed with appealing touches like a power point for a heated vest, ABS, a pillion seat, and a small functional luggage rack with plenty of tie-down points. City or Country this bike is an excellent commuter, frugally carrying you to the office during the week, happily softroading you to the cabin on weekends.

There are a few minor issues that BMW could refine. The digital cluster, whose functions include speedometer, odometer, dual trip meters, clock, battery indicator and the warning lights, would benefit from a fuel gauge. Given the gas tank’s location I’m at a bit of a loss as to where to stash the removable gas cap with each fill-up.

More critically the header pipe running to the exhaust runs by your left leg. Stand up, as off roaders do, and you find the heat shield running along the pipe is short, and hot enough to melt a hole in the inner calf of one’ rain gear.

Rivals? Hiking boots, a mountain bike, the KLR650, or, more likely the only other dual-sport out there with optional ABS Suzuki’s V-Strom 650. None of those alternatives have the Country’s build quality. You could detonate a small bomb next to this bike and not worry about shrapnel.

Would you take BMW’s G650X Country to the middle of the Kalahari? Likely not… but you could. For crossing BC, pottering though the Rockies, making short work of rough roads or scrambling forestry, logging and dirt roads the Country is a comfortable, practical, and genial softroader. Plus when it comes time to commute around town, it’s just as easy to revel in. Hard-core be damned, the G650X Country is near perfect for taking it all in, gravel or paved, provided you’re willing to smell the roses and stop for marmots.