Hurtling through a serpentine of canyons on British Columbia’s Crow’s Nest Highway, I’m shocked. The BMW F800S I’d discounted as having an accountant’s soft, sensible and conservative soul, and I are in the groove – smoothly entering the corners, snapping the throttle open at the apex, feeling the rear suspension squat a bit and the Continental Road Attack bite. The parallel-twin thrums from 6000rpm to the 9500rpm rev-limiter deep in the red, grinding out the torque. Exit quick, roll off to bring the F800S upright and repeat. This is forcing me to rethink the F800S a bit… the same way discovering your accountant is into kink has you re-examining your last tax return. 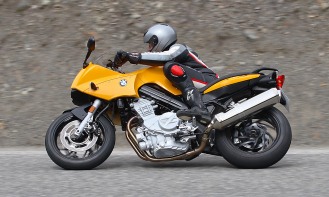 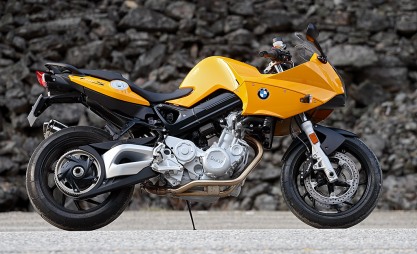 There is no doubt that this “little” beemer is capable. And part of this rethink is the F800S is keeping the keeping fast company in the form of photographer Kevin giving chase on KTM’s mad-as-a-hatter Super Duke 990. That said, the F800S and I are definitely pushing the limits, but no matter what I ask of it the F800S complies.

Damn, this bike is forgiving. Pulling on the throttle in a corner the rear end washes a little with the doom-o-meter pointing at “impending”. I can tell – Kevin on KTM has backed off quickly thinking disaster is in the offing, but the F800S’s chassis and suspension just get on with finding traction. The event should have me sweating, swearing or giggling in my helmet… but it’s all rather calm and staid.

According to BMW Motorrad Canada’s website the “S” is about “Serious sporting”. The BMW pharmacists, tweaked out after creating the addictive K1200R, must have cut the ecstasy with anti-depressants because the F800S is a decidedly mellower mix. Whipped hard the “S” closes on the sporting claim, but in the vein of a soft-sport-all-rounder – a market niche so narrow as to require quantum measurement.

There in lies the problem. An F800 frocked up like a sportbike doesn’t seem clear on its intentions – sport bike or genial all rounder. Core to this is the engine.

Wrapped in sportbike looks (and marketing) the F800S’s DOHC, eight-valve, fuel-injected 360-degree parallel-twin heart is 600cc middleweight class equivalent of a yawn. The BMW designed, Rotax built plant grinds out 85hp@8500rpm and 59.7 lb-ft of torque@6000rpm with moderate but persistent “good for a small parallel twin” vibration. To find sport, excitement and the engines best poke you’ll need to whip it mercilessly in the 7000-8500RPM range. Meanwhile everyday use sees the plant at its low-frequency throbbing smoothest between 3500 and 4750rpm.

Compared to other new and returning rider bikes though the F800S has enough grunt to outclass the likes of the Suzuki SV650, Ducati Monster S2R 800 or the venerable Ducati SuperSport 800. More importantly BMW has spread 90% of the tractable torque from 5000-8000rpm rather than focus on horsepower, making for mild-mannered flexibility rather than the frenzied new-rider-shredding race replica performance.

Will the F800S’s engine stir your passions? Are you a fan of electric pepper grinders? The engine sounds remarkably similar to one. The engine noise, not a note or tone, doesn’t scream “bike”… in fact it doesn’t scream at all. It’s been ball-gagged by a huge muffler. Over this “churning” you can hear after-market exhaust manufacturers rubbing their hands together with glee, anticipating F800S owners craving grown-up bike sound.

Stretch the throttle cable and the parallel twin unhurriedly spins the dial in a closed test area to 220kph (136mph). At which point the air-stream over the F800S’s short windscreen has you tucked into to the tank and your nose flattened by your helmet’s faceplate. BMW’s wrings the most out of this engine with tall gearing, at rev-limiter in second the F800S is clipping along at 135kph (83mph).

Shifting between those ratios is accomplished by a utilitarian 6-speed transmission, paired with a relatively light and precise cable actuated clutch. Balancing the experience are sporting smooth clutchless up-shifts as the engine winds up past 7000rpm, though with the clutch on hard shifts there was an occasional 5th to 6th false neutral.

Though there are a couple quirks in low gears. Neutral to first on our tester was a vague with an indeterminate thud through the ‘box. Additionally at low speed there was transmission “clatter”, the result of vibrations transmitted back through a low maintenance belt drive into the gearbox.

Luckily, BMW has issued an update to the front belt pulley of the drive system, replacing the two-piece version with one containing 4 internal rubber dampers. This minimizes vibrations and having tested the first F800 (an ST) in Canada with this modification, it’s clear this refit noticeably smooths and quiets low speed operations.

The engine’s broad torque curve and flexible gearing make the F800S an easy-going canyon runner, giving you a choice of two gears for most curves. Combine this with some of modern motorcycling’s best fuelling and throttle control throughout the entire rev range (other brands please take note), the F800S becomes an excellent and controlled cornering tool for new, returning and seasoned riders alike.

The Brembo supplied brakes are subtle, progressive, and effective, if soft. The ABS, an $850.00 CDN option, adds to the friendly and usable aspect of the F800S, perfect after a long tiring day of sport-touring when Bambi appears mid-lane and you mash on the binders. For aggressive riding however, the ABS confuses the F800S’s sporting pretensions; pull hard on the adjustable lever, take the front tire to the edge of traction and the brakes let go shooting you forwards.

The F800S’s conventional suspension setup tends towards supple. Two days of testing were spent tuning rear suspension preload and rebound to a balance between wallow-o-matic and pogo-stick. The key was more rebound on the finger-friendly knob and much more preload through the remote adjuster. Happily the un-adjustable front forks seem well sorted, offering good compliance and minimal dive under braking. Once dialed-in the F800S feels admirably planted and stable – much better than most entry/re-entry market bikes we’ve sampled.

The F800S’s integrity extends to high-speed sweepers at “a closed test area”, 160kph (100mph) plus clip. Given the F800S’s relatively slight weight, a claimed 182kg (401 lbs) dry, a surprising amount of push on the bars and weight to the pegs is required to transition between corners. This may be due to the steering damper, which slows handling but adds stability, and the low clip-ons that reduce steering leverage in comparison to a wider bar arrangement like the F800ST.

Out on the roads the F800S frugally sips a 16L tank at an average of 5.2L/100km (45.2 mpg), even including the occasional hard riding scratch through the twists. Flogged, the S and you can consume up to 6L/100km. Touring will embarrass a Toyota Prius at 4L/100km, so perhaps the stars should be pushing the F800S instead… DiCaprio would look sporting on the yellow?

The F800S’s economy means infrequent contemplation of the filler cap on the rear right of the bike bellow the pillion seat. It’s stylish, but ties you to filling the bike from one side like a car. Beyond this the F800S is a handsome and distinctive collection of crisp clean-cut edges and origami folds. The huge air-box, masquerading as a tank, peaks in the middle and prompted one wag to quip that the F800S looked like, “someone tenting in sweat pants”. Er, not likely… The F800S isn’t quite that exciting.

Certainly the fit and finish is excellent and speaks to longevity. Our test bike had been publicly humiliated at the Vancouver Auto Show by thousands of test sitters scratching, scraping, poking and cranking at it. This probably explains the need for extensive suspension re-adjustment. The damage? A few minor scratches, testifying to the build quality. That’s good, you won’t have to deal with anvil-off-a-bridge depreciation if you go to resell in order to pay for your physiotherapy bills.

Shorter riders may have better luck, but at 6”2’ I found the high pegs, weight on the wrists and a forward stance over the faux-tank, combined with the parallel-twin’s tiring vibration pulling focus from the F800S’s strong points. A full day’s ride had me contemplating how many Advil to take for aching wrists, so I swallowed two muscle relaxants, had a shot of Vodka, and passed out instead. For tall riders though, you’d best like it rough.

Continuing the strange F800S concoction there are a number of well thought out product details. Ad hoc luggage easily straps to bungee points under the pillion grab-handles. There’s heated grips and a power point for your electric vest standard. The mirrors are largely vibe free with good rearward visibility. The switch-gear is solid, and in the classic BMW configuration of left signal on the left cluster and right on the right, so prepare for the inadvertent honking until you adapt.

Indeed everything about the bike feels exactly as it should… like a proper BMW. And that means that the F800S could easily grab new or returning riders looking for the BMW experience. Especially if they fancy sportbike looks, upmarket build quality, poised handling, and an engine that doesn’t overwhelm.

In the end though, this F800 is betrayed by the “S”. Aspiring to sport intentions confuses F800S rather than focuses it, leaving the bike with looks that promise excitement the engine can’t deliver and ergonomics with a rare talent for discomfort. Thankfully this bike has a fraternal twin in the F800ST, which makes as much sense as the F800S doesn’t (see our upcoming review).

So who would buy the BMW F800S? Well my accountant for one. I just ran into him on the street and I think he likes the look of the beemer… and rumor has it he’s into kink.