I wonder what’s up that road?  It’s rutted, rocked and the soil looks loamy with aggregate mixed in.  I’d never attempt this grade on an adventure bike, but standing tall… very tall on the pegs of BMW’s new purpose-built enduro the G650X Challenge the previously unreasonable seems within my grasp.  A twist of the throttle and a muted dirt-bike “brapp” from the high-mount exhaust signals exploration.It’s an old logging road and it’s a discovery.  The first switchback reveals a rusting abandoned bulldozer.  By the second, I’m beginning to realize self-imposed off-road riding limits and looking for a place to turn around.  If I stop I’ll need to walk the G650X Challenge around.  Even with my 34-inch inseam the Challenge has me high-centered paddling around parking lots – this is an incline with unsure footing.  I needn’t worry, the bike we’ve jokingly called the “Long Way Down” comes through for me.

With the balance and deportment of Karen Kane in her ballet prime G650X Challenge turns tail.  Part of that poise is due to BMW placing the fuel cell under the seat right-hand side.  Moving the fuel’s mass down into the frame gives the Challenge the stripped down form of a trials bike and lowers the center of gravity making for better balance.  Then there’s the steering lock so wide this thing could check it’s own taillights. 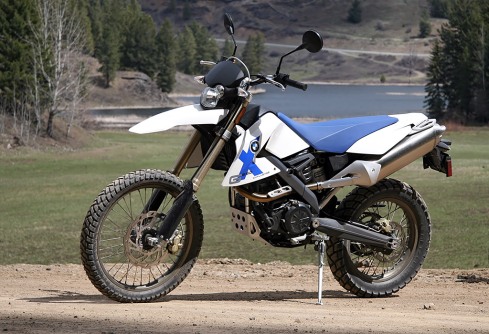 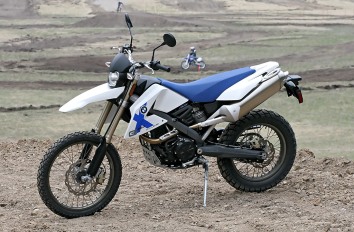 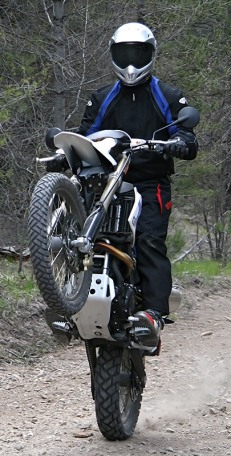 Balance is only part of the control equation; the fuelling to the 652cc engine is immaculate – a hard thing to accomplish on single-cylinder.  Around since the Romans, the Rotax manufactured plant has been used in BMW’s F650 series.  Now updated it’s obvious BMW have had time to get the design right, there’s almost no on-off throttle jerking.  Paired with a precise feather-it-all-day light cable actuated clutch control is complete.

Feet are planted on serrated foot-pegs, and the bike is narrow and nimble beneath me.  No fear of scratching the aluminum skid plate thanks to extra-ordinary clearance, I come round though the ditch.  Once turned, a process that saw momentarily contemplation of lifting the Challenge’s 156kgs should I drop it, my adrenal gland is faced with an all-new assault – the decent.

Suddenly the brakes, which on the road left the Challenge feeling… er… challenged makes sense. A single 300mm petalled rotor up front is gripped by a double-piston floating caliper, meanwhile out back a single-piston floating caliper clenches the 240 mm disc.   Braided lines, both front and back, provide excellent control and let me near-lock the rear tire but skirt a full slide.  Likely I’m relying on too much back brake and not enough front, but this is new territory for me – literally and figuratively.  May dirt biking never an execution of a downhill hairpin this crawling again…

Later in the day I fall back from the plumes of dust left from the other press bikes.  The Challenge and I are getting to know each other.  The bike is calmly ripping along through gravel, washboards, and potholes, with the only concern being over the occasional tight corners slowing our 100kph pace.

The long traveling suspension, with 270mm of action front and back, soaks up the roads chaos.  Keeping the sanity up front is a 45mm upside-down fork, with rebound and compression damping adjustable, holding a proper dirt-bike 21-inch spoked rim.  Meanwhile the Air Damping System, lifted from the HP2 and adjusted to the 650’s lighter 156 kg wet-weight, provides continuously variable damping thanks to the air pressure ensuring that the meaty rear 18-inch Metzler Enduro 3 Sahara is hooking up.  I’ve ridden a few Enduros in passing and this system makes other bikes in the class look like they have leaf-springs by comparison… like a pram, a carriage or a corvette.

Having ridden offerings like the BMW R1200GS and GS Adventure, the Aprilia Caponord and smaller products like the V-Strom 650, would I dare this pace on an adventure bike?  Would I be as calm?  Would it feel as relaxed?  Not on your life…

The Challenge gives me enough off-road poise to keep local red-necks from passing beer though their noses with laughter as they swerve along in their pick-ups.  Given all that you might expect the Challenge to be bad on the road… but instead it’s just a hoot.

On the first day of ride testing, we’re descending Apex Mountain’s cool evening Alpine returning to our overnight in Penticton.  Right from the start we’re back “off-road” again.  The Challenge dares me to clip though gravel shouldering of a switchback recalling the Bond quip of, “I’m afraid we’re being out-horse-powered!” as he steers a Citroën 2CV off road in “For Your Eyes Only”.  We’re on the road… technically.

Back on pavement the Challenge shows it’s prowess.  Twists, hair pins, ruts, wallows, bumps and gravel patches fall under the treads – the bike eats it up.  High-speed sweepers see a bit of weave as a result of the long traveling suspension – but that’s to be expected.   Given the winters remains on this road I’d be crawling cautiously on a sport-bike, but not so the Challenge.  Still, a few adjustments in on-road riding style need to be made for BMW’s enduro.

The Challenge is tall, a change of perspective that makes judging corner entry speed harder – I found myself tending to a more conservative pace than the Challenge was capable though the twists.  The brakes are soft for road use, but being a road rider the tendency for the front suspension to dive under a pull of the right-lever can be disconcerting.  The turn in is also a bit slow thanks to the diameter of the front wheel.  Those are small prices for turns British Columbia’s worst roads into helmet splitting fun.

Scandalous but the engine is part of the appeal.  BMW claims the G650X pushes out a claimed 53bhp @ 7,000rpm and peak torque of 60Nm at 5,250rpm – a stifled yawn by sport-bike standards.  With a broad torque spread, good pull off the line and a relatively short first gear this is a good match for dirt riding.  The updates from the F650-series include a lighter fry-wheel for quicker smoother spin-up – engineering speak that translates to “thrash me”.

As expected from a small displacement bike, you’ll be shifting through the 5-speed gearbox constantly to get the most out of the Challenge on the roads.  That would be an onus, but the Challenge’s gearbox is a pleasure – slick, smooth and positive shifting. The only issues were an occasional fourth-to-fifth false neural with hard fast up-shifts, and an infrequent grabby final let out of the clutch causing a lurching pull-away.

Looking for the 650’s upper limit?  Tucked flat to the tank, attempting impossibly to squeeze behind the miniscule flyscreen, with mad vibration though the bars, pegs, and seat, the Challenge carries 200lbs of moto-jouro to an indicated 177kph on digital display – slight downhill grade and tailwind optional.  The press ride got spirited occasionally.

Most riders will stick mild and relaxed low-frequency thrum of the Challenge’s all-day touring range between 90-110kph. The fly-screen over the digital gauges and R1200GS inspired headlight provide relatively good airflow.  Tall, loose, upright ergonomics keep the Challenge is remarkably comfortable. Even the plank-soft seat narrow enough to be classified as a wedgie, provides better comfort that expected between gas stops – so instead of a torture device you’re getting a church pew.

If you feel like making better time between dirt destinations, the Challenge will happily sustain 140kph through the paved sweepers, but the bars feel like gripping an overzealous electric toothbrush in each hand and the wind-blast becomes wearying.

There are details that could make the Challenge a stronger Enduro. Hand guards might help minimize bar vibration and offer protection from impact and elements.  There’s no fuel gauge and riding a logging road labyrinth, with a 9.5L tank and sparse gas stations, I’d want to track every drop despite the gently sipping engine.  The gas-cap annoying, it detaches and every fill up you must find a place to stash it.  The position of the radiator, the widest part of the bike other than the bars, could see it cracked in the event of a drop.  Beyond that though the Challenge features excellent attention to detail, right down to the tidy storage of the air damping system’s pump under seat.

In the hands of a master the Challenge will play an gritty concerto of flying mud, berms, jumps and sprays of gravel, but it’s kind to a complete duffer too.  That’s important, because while most people won’t start with the G650X Challenge as their first Enduro bike they certainly could. With every little off road experience the Challenge eggs you on and builds your confidence – abandoned lots become playgrounds and gravel shoulders an excuse to imagine Dakar.  If you’ve a taste for grit the Challenge might be the only bike you need for weekend fun that doesn’t involve x-rays Monday morning.

Cruising along Old Headly Road I keep looking at gravel off shoots, for my entire sport riding life I’ve blasted by these.  The BMW G650X Challenge lived up to its name; it has challenged me to reconsidering my riding environment.  If BMW’s goal was to create a hard-edged Enduro only serious dirt riders can enjoy, then they’ve failed miserably.  Instead in the G650X Challenge they’ve created a bike that will willingly take expert and novice out into the world… failure has never created so many dust caked grins.