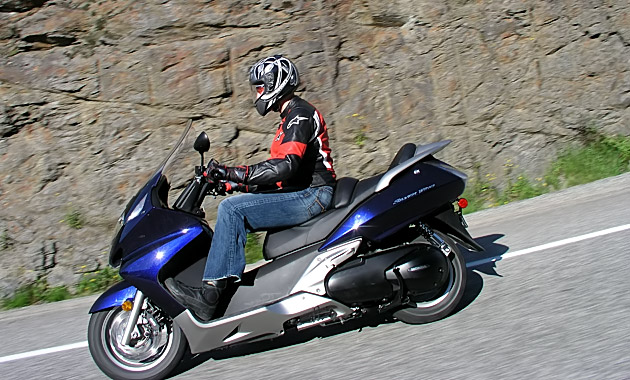 George Jetson had it right; even in the opening sequence of the show his whirring air car portrayed the kind of congestion-carving nimbleness that any commuter who’s sat in a constipation of single-occupant, Yaletown-apartment-sized SUVs craves.  While a flying car may be out of the question, a sleek solution with slick sci-fi styling and Euro-flair may be at hand.  Meet the Honda Silver Wing, a scooter aspiring to motorcycle displacement and a spirited panacea to soaring gas prices and commuting concerns.

Up for a thought experiment, conducted with the naiveté of an idealist?  Spare some of the ample moments you have sitting in Vancouver’s strangling arterial constrictions of traffic and idle on this; in your mind’s eye put the driver of every single occupancy vehicle in sight on a scooter rather than the current cloy of SUV auto-bloat.  Of course you’re wondering where the laptops and briefcases will go, but riddle me this, is their workload really so heavy that a cartage requires a Hummer?*

While those of us in the two-wheeled set have come to terms with not taking it all with us, bikes, and I use the term advisedly, like the Honda Silver Wing change all that.  Not since Alice in Wonderland has a rabbit hole hidden so much.  The 55-litre under seat storage is capacious, swallowing a couple of full face helmets, two day’s worth of groceries, a weekend’s worth of clothes easily, or the dreaded laptop and briefcase.

Concerned about highway speeds on your scooter ride in from the further flung ‘burbs?  Don’t be, the Silver Wing is capable of accelerating to license revoking speeds with an alacrity that will leave the Smart Car set weeping and hot hatchback owners stunned.  Off the line be prepared to leave most exotics looking at the Honda’s sculpted rear-end – think Cylon but more cuddly.

Part of this hole shot hustle is due to the Silver Wing’s transmission, which is twist-and-go simplicity itself.  There is no fumbling with a clutch, shifting or levers to operate – it is counter-intuitive for all of two blocks.  Honda’s market speak has dubbed the transmission the  “V-Matic automatic belt drive”; regardless of verbiage the result is an easy and linear delivery of power and great pull off the line.

The performance is provided courtesy of a fuel injected 582cc parallel twin engine putting out around 50HP at 7000PRM and 54.00Nm (39.8 ft.lbs) of torque at 5000RPM.  By motorcycle standards the numbers are embarrassingly low; except for one that truly matters – fuel economy.  On tour, fully loaded and ridden at speeds that left the concept of scooter in the dust, fuel consumption pushed all the way up to 5.02L/100km.  Around town riding will see that number slip into the high fours as the Silver Wing gently sips from the 16L tank.  In Europe the streets swarm with scooters and mega-scooters like the Silver Wing and for good reason, as anyone who’s ever uttered the German equivalent of “fill ‘er up” can tell you.

Somewhere in this plot, though, practicality meets a surprising amount of fun.  Nipping though traffic the Silver Wing flits like a minnow through a pod of belugas.  With the fuel tank and engine inches off the ground the mini-Wing redefines “low centre of gravity”.  The result is an embarrassing ease of maneuvering, riotously quick lane changes, corners so quick they invoke giggles, and a temptation to filter to the front of traffic to be first off the mark.  Passing is easily accomplished with less planning than you’d do in a car and makes use of good pickup late in the Silver Wing’s RPM range.  The Silver Wing can suddenly reopen what a city like Vancouver is to you; errands are easy, sacrifices to the dark Gods of parking are no longer required, and an evening spin along Spanish banks is no longer a traffic-ridden slog – it’s a gas. 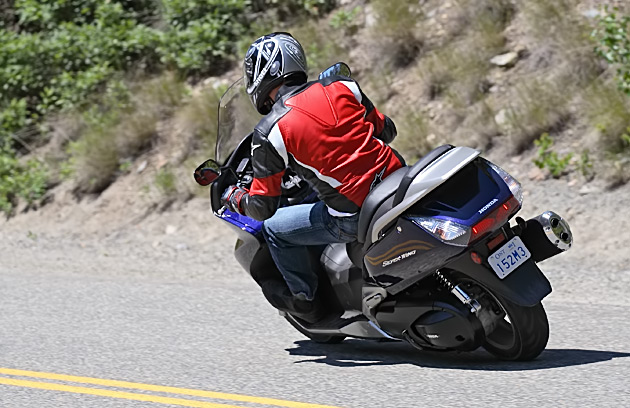 Unlike smaller scooters when the workweek comes to a close, the Silver Wing can also sate a bit of wanderlust.  Craving a two-wheeled tour of the Okanagan with space to pack the mandatory winery impulse purchases?  It comes no easier than the Silver Wing; thrumming along at 110kph (and occasionally “drifting” well beyond that Officer) on Highway 3 is a breeze.  You may want to stay in front of the cruiser throngs though; they will only slow you down in the corners.  The Silver Wing may not handle motorcycle-like, its scooter inspired tires are more sensitive to bumps and ruts in the road as is the soft suspension, but the handling is mercurial and easy.  Still the through the twists ‘the Wing is more than capable of cornering speeds that will raise drivers’ disapproval.

Should an emergency crop up, be it an erratic deer or clueless driver, the Combined Braking System with ABS is more than up to the task.  The feel is progressive from the right lever, while the left puts a greater emphasis on the back brake and is a bit more abrupt.  The ABS is slick and controlled with almost no pulsing felt even on gravel panic stops.

The biggest concern around two wheeled touring or commuting is weather protection.  The Silver Wing meets the standards of all but the most luxurious touring bikes in this respect. In the wet, I’d likely be packing some rain gear, especially at city speeds where the Silver Wing’s protective aerodynamic bubble collapses, allowing the rain access to your Armani and loafers.  The biggest flaw in all this is the relatively short and narrow windscreen, whose dimensions at 6″2′ I do not match.  This resulted in significant buffeting and bug splatter on the highways of the interior.

Yes, interior.  My first weekend on the Silver Wing saw me rack up over 1100kms thrumming through British Columbia, so the bike’s comfort is not in question especially once you take the time to adjust the backrest.  The engine does however produce more vibe in comparison to other mega-scooter offerings, like the Suzuki Burgman 650.  The resulting in a throb through the bars that can grow tiresome, but not to the degree that a sport-bike’s seating position will leave your chiropractor chortling with flush fiscal glee.

With the Honda Silver Wing, high gas prices and work day congestion stops being a bitter sluggish pill to swallow.  The Silver Wing is not only a practical around town commuter but is an admirable two-wheeler come the occasional weekend tour.  The future might not hold flying cars for all, but a few more mega-scooters certainly wouldn’t hurt.

* Of course this was written in the height of summer. Before an artic outflow plunged Vancouver into a world where Mr. Freeze would feel comfortable and walking down the street you’re consistently having to fight the urge to peg bad drivers with a snow ball.  At the moment a scooter is looking none too practical, unless it features outrigger skis.