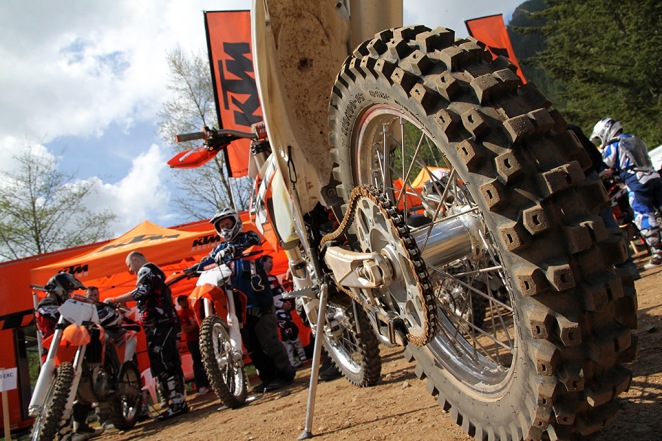 Kevin: Not on Ground

Agassiz, BC, April 15th – I am in the air. In fact, I’ve never spent so much time in the air on a motorcycle. Ever. Previous to the KTM Ride Orange Moto Tour 2012, airborne outings could be counted on one hand and mostly ended poorly. Below me is the 350 SX-F, likely shorthand for Sexy as F***, a weapons grade rarity from KTM’s 2012 MX line.

For those who’ve never ridden a full on MX bike on a track, like myself before today, these beasts launch skywards with the merest provocation. Up a hill? It ends in the air. Little bit of a riser? You’re in the air. Pretty big whoop? Look, air. These bikes are in a constant, exhilarating and terrifying negotiation with gravity and the lesser laws of physics. Series of whoops? Somewhere in the middle of these mounds of spite between compound air and landings is where it all goes wrong and I’m sent into the rhubarb largely cushioning the bike with my body.

The results, a bruised and swollen tailbone speaks to a young man’s sport, after receiving a 350cc wedgie in the middle series of whoops. Yet, I wouldn’t change it for the world. The dirt track and MX sit at the outer edge of the curve of motorcycle experience, a distant deviation from the norms of road, adventure and dual-sport. The track is all your technical off-road ride challenges, put end to end, condensed, compressed, the volume turned up and looped. Despite an ignominious MX track career totaling one lap, and more bruises to my body than my ego, I can only recommend the experience.

As can Kevin who more successfully completed demo sessions on the KTM 350 SX-F, 350 XC-F and the 250 SX-F. The experience goes something like, “Wheeee! OMG! OMG! OMG! OMG! Crap! Wheeeee! Crap! Crap! Why is that guy’s tire flying over my head? Tidy underside to the bike though. Corner! Berm! OMG! OMG!

Seriously, though there’s something to be said for a bike that can take you from zero motocross experience to double jumping whoops in about 15 minutes.”

Eventually his adrenaline rush will wear off.

For your pains, and even without a having a “digger” 10 minutes of demo laps is a hell of a workout, you have the chance to sample bikes you simply never get to test. No dealer in their right mind (which leaves a few) would put you on an MX track with a demo; the bikes depreciation is in inverse proportion to the astronomical heights experienced riders reached. That consideration makes the KTM Ride Orange Motor Tour a unique opportunity to not only test ride the bikes who sport taglines like “The High Flier”, “The Blockbuster” and “The World Champion Concept”, but to have one of the most extreme experiences motorcycling offers.

Details and dates for the KTM Ride Orange Moto Tour 2012 can be found here: http://www.ktm.com/ca-en/news-events/news/all/details/news/detail/News/ktm-ride-orange-mx-tour-2011.html

Next BC date is April 18th, 2012 in Kelowna, BC at Bear Creek. If possible pre-register with your KTM dealer, but for those dropping in slots are generally available in the later sessions.