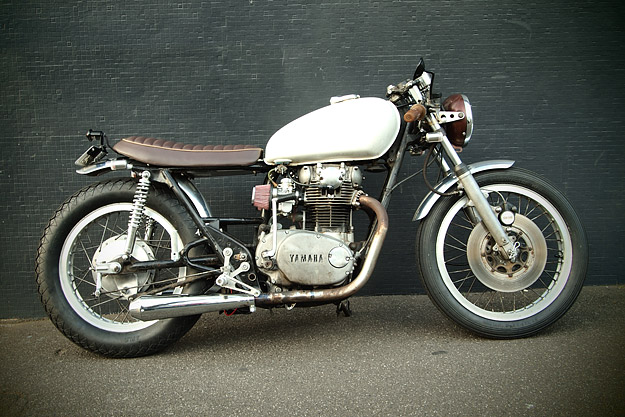 Pick up a phone and talk to a PR Manager for a motorcycle company, and inevitably “budget” comes up in the conversation. In a chat, a fellow publisher is concerned over a lack of press launches this year; they boost readership, but this journalistic perk also represents a major industry expense. Adding to the gloom former Ducati CEO Michael Lock revealed the US industry was down 39% in September in an LA Times interview, then examined the industries immediate future with unflinching pessimism. Remember though, the motorcycle industry is not motorcycling. If anything motorcycling is undergoing a quiet grassroots resurgence.

There are media indicators, sites like BikeEXIF dedicated to the cool and beauty of customs, rats and cafes or HellForLeather who do an outstanding job of the latest news, gossip and fearless (or over zealous) industry analysis. Overwhelmingly neither of these outlets are dedicated to the newest, latest and greatest offering from “the Industry”. They aren’t the only ones.

We’ve have been spending a good amount of time at OneWheelDrive.Net’s official motorcycle co-op, MotoMethod (this comes with the territory of owning a KTM 640 Adventure). Excuse the plug, but there’s a point to be made here. The bikes that clients are working on, or have MotoMethod work on, are not new. There is a growing Cafe Racer and Rat scene seemingly spinning out of on by the hipster single-y (single speed) bicycle scene.

These are simple motorcycles, easy to maintain, go forever, Universal Japanese Motorcycles – a lost idea that never dies. Low horse power, old and a bit leary, these bikes answer the question of why have a 200hp sport bike in a province where 40kph over the speed limit sees your bike impounded? They are found in garages and previously ignored corners of Craigslist, by people willing to look at an ad that starts with “80s” and engage in motorcycling with a dash of retro cool, or irony.

These riders are not dressed head to toe in leathers, boots, jeans and a lid seem enough, which isn’t going to help gear manufactures. They are doing much of their own work, which isn’t going to help traditional shops. Nor are they running out to buy the latest in plastic clad offerings or $26,000-plus adventure bikes. The pick up parts, used where they can, and get excited over battery eliminator kits, perfect kick-start technique and how to pound out their own gas tank.

In many ways, the bikes coming out of the new “closet” motorcycle industry are a lot more individualistic and interesting than any race-rep sportbike with a titanium exhaust tacked on and a chip mapping the fuel injection. That is likely because these bikes are personal, in their care, assembly and expression. Like the 70’s and 80’s, the next wave of motorcyclist, are learning in a garage.

The next industry representative who says motorcycling is in the dumpster, needs to walk into a shop like MotoMethod. The industry may be hurting, but motorcycling and the enthusiasm for it is not only alive and well, it is adapting and growing.