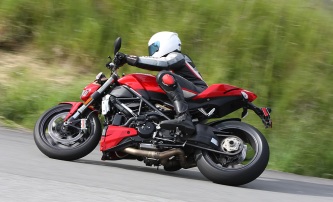 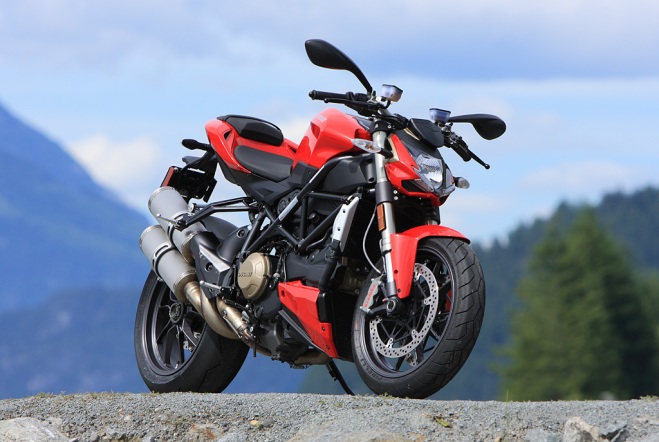 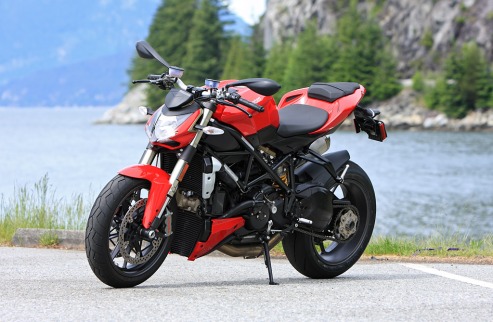 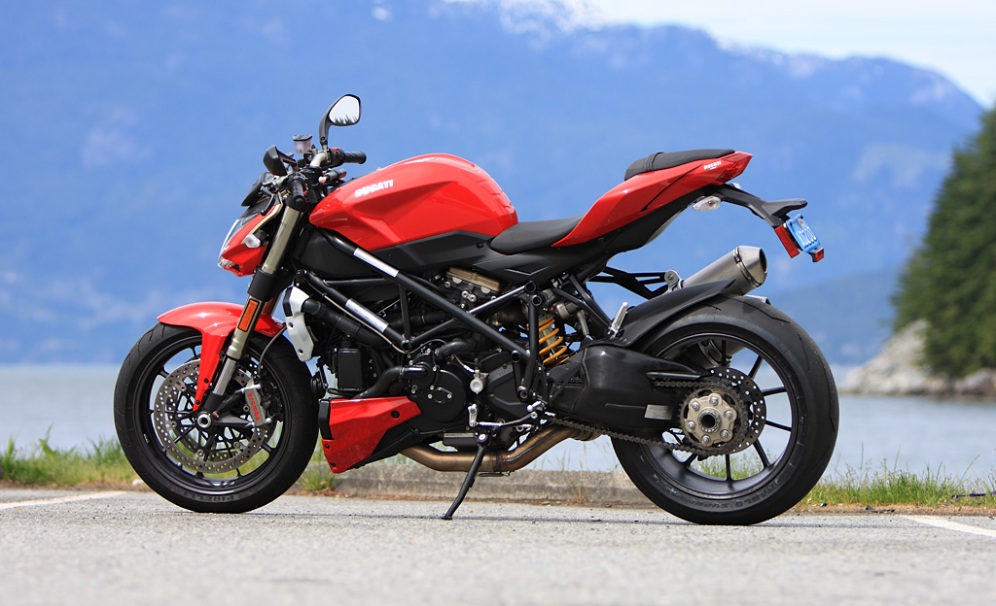 I’m shooting through the corners on a vicious tide of acceleration, noise and quick gratuitous gear changes. An angry right hand sees the bike smash towards the horizon as time dilates like a once cool Matrix special effect. The Ducati Streetfighter 1098 willingly responds, launching me into the next penal code with a twitch of remorseless unforgiving throttle. With the first ride there’s no doubt that Streetfighter doesn’t mean naked or softer; this is a superbike… stripped.

A dramatically sexy piece of industrial work, the Streetfighter sits in traffic glaring violent intent at the road’s users through white-hot LED eyes. These positioning lights are shrunken squints of the 1198’s headlight layout, with amphetamine-snorting intakes below to emphasize the family connection to the superbike.

And if the Streetfighter is plotting evil for the world, likely its rider is aiming for vengeance too, because this bike concedes very little to day-to-day use. There is, for example, no good place to put your right foot, the exhaust shield beside the right footpeg pushes on your heel ensuring you can’t get planted… unless you happen to have a cloven trotter on that side. The bars are a bit wider set than a sport-bike, but it’s as if Ducati swerved at the last minute from a more upright position and dropped them.

If you’re looking to escape superbike weight on the wrists, the Streetfighter isn’t quite your destination, as the 840mm seat height places your ass 20mm further into the air than the 1198. To get the feel of the near sport-hard seating position, go to yoga and practice downward dog without the mat. A fuel tank 25mm shorter than the 1198/1098’s and footpegs a little lower and further back than the Monster’s, do soften this mysteriously uncomfortable brew. In the end though the Streetfighter’s ergonomic mission is attack the world with the corner assaulting purity of full on superbike in the buff.

If you want kinder ergonomics, allow the sales person to introduce you to the Monster, the Hypermotard, a lifetime supply of Robaxacet or a swap of the bars and the addition of risers.

Cornering though, the Streetfighter reveals its true self. It bites into the assault with tire rending aggression. It kisses the apex, and dances on the rubber’s thin edge like a score of raving angels to the engine’s barely refined snarling beat. It unleashes apocalyptic torque for those who dare power hard and aggressive out of the apex. This is what one would expect from an engine with a maximum output of 153hp and 84.5lb.ft of torque at 9,500rpm.

Roll onto the throttle coming out of an apex and the Streetfighter rewards you with power, bonkers mad power, hurtling you through to the next turn. The frame is derived from the 1198’s but features a 25.6 degree head angle (rather than the superbike’s 24.5 degrees) and the swingarm is some 35mm longer, adding to the stability and giving a beautiful stable and planted response to the turns. More 999 than 1198, and saving the Streetfighter from a heavy feel is the leverage offered by the marginally wider bars.

Lay into the throttle; really give it a good pull exiting?

Bring a change of undies.

For the record, this is the first bike that I have ever truly wanted the traction control option on. It may not be the last, but the power here truly makes me see the need for such a system. For the traction control you need to jump to from our tester Streetfighter $17,495 CDN ($14,995 US) to the $22,495 CDN ($18,995 US) S version which swaps Ohlins suspension for the very effective Showa 43mm fully adjustable upside-down forks in front and the Showa monoshock in back. It also goes on a diet of carbon-fibrous bits and replaces the cast-aluminum wheels with the lighter forged loops.

But the power is the same, and really it’s the traction control I’d have.

Luckily there is another ying to this engine’s yang; a pair of Brembo Monoblocs swiped from the 1198 parts bin, biting on 330mm discs up front. These are powerful, use one finger only brakes, pulling you down from speed in a heartbeat.

Alas, not all of them are good.

In traffic, the Streetfighter may be so named because you are locked in combat with the bike. At in town speeds it lunges, surges and bucks. The throttle is twitchy enough that one moment you are at zero and the next you’re at 60kph. The dry clutch feels binary, and feathering is a dark and grueling art. There is not a hint of subtlety to be found until 4000RPM, and below 2500 (welcome to the world of traffic) fueling is pathological. So, if the Streetfighter’s aim is in town usage, then it has fallen short of the mark… or more likely surged well past it.

New compact switchgear includes a cover for the starter button, which is Sci-fi channel cool – think flicking a cover before firing the guns. The turn signals aren’t near as enticing. The cancel button that is raised out of the slider is easily missed and the feel isn’t affirmative. If the look weren’t so darned aggressive we could nickname the Streetfighter “Blinky” for the constantly uncancelled signals. And, face it, on a machine that attracts this much attention from the local constabulary you need all the legality you can get.

Perhaps there was something lost in translation. I think of a Streetfighter and what leaps to mind is a stripped down sportbike with higher bars, a traffic battling combination of epic and ordinary. Yet, we cannot talk about uncanny civility, ease of use or surprisingly livability, because there is none here. In the case of the Ducati Streetfighter we only have one side of the coin, phenomenal sport ability, making it an option for those who want a distinctively different take on a superbike. So it’s not a wolf in sheep’s clothing, it’s a wolf in no clothing at all.