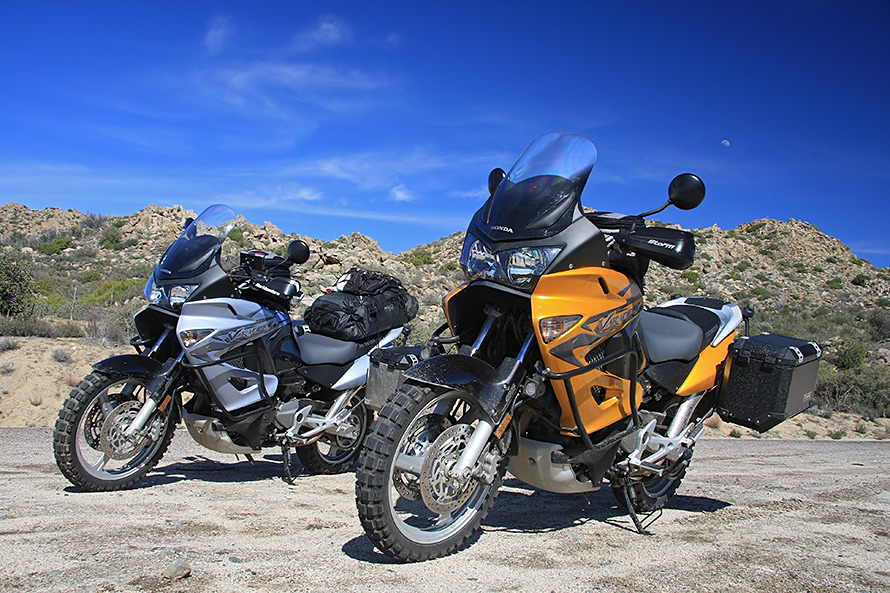 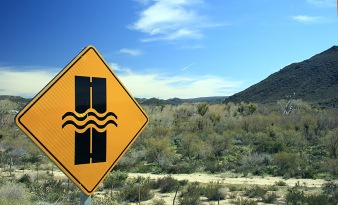 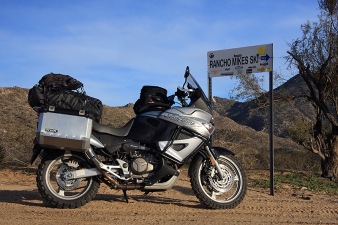 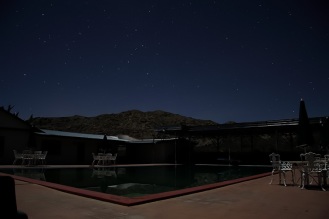 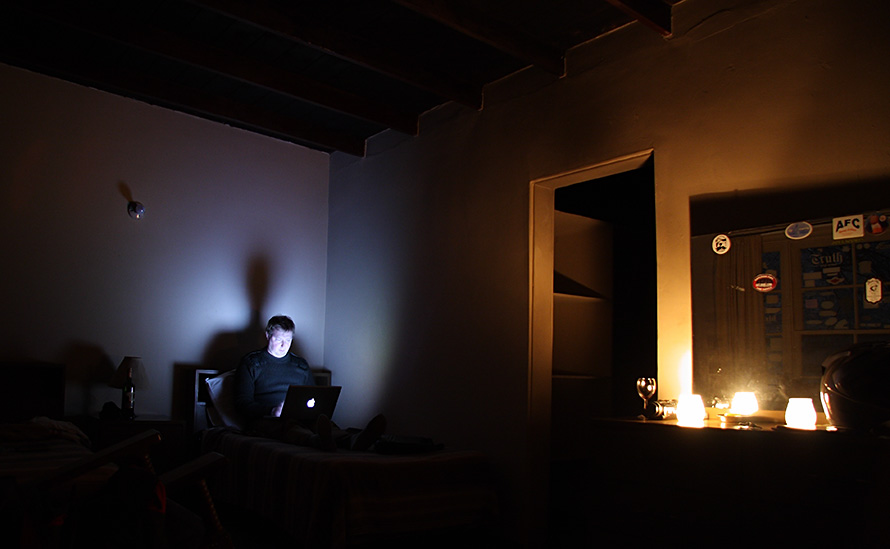 It’s noon by the time we escape the coffee shop’s WiFi hotspot, 12:30 by the time we’re on Ensenada’s outskirts and on highway three’s serpentine way out of Ensenada. Our departure has been fraught with delays as the laid back Baja vibe collides with Torontonian “center of the universe” demands from Kevin’s work.

By the time we’re having a 3:00 PM lunch in Valle de la Trinidad, 11km before the turn off to Mike’s Sky Ranch, it’s optimistic to expect a daylight arrival. We are about to break the rules; riding in the dark, off road, in the Baja, on big bikes that we’re still getting to know.

We’re going the “easy” way into Mike’s, but soon as we hit the first sands the definition seems dubious. The big bikes are a handful, and changing over to Continental TCK80’s with their knobbier tread has gone from luxury to mandatory. The ride from the highway inland becomes increasingly more technical, increasingly scenic and the shadows longer as we edge into night.

Kevin’s taken to dirt riding more quickly that I. Where he has the gumption to speed through sand, weight shifted back and planing the Varadero’s front end as if piloting a jet-ski, my progress is slower and more cautions. It’s a point of contention, as Kevin points out that at my pace we’re not going to make Mike’s by nightfall. Two turns later his silver Varadero is laying down and having a nap on its side in deep sand. So time eaten proceeding cautiously and learning about this new surface, or time picking up the bike, it’s a matter of personal choice.

I crawl by, trying to find a solid spot to park my bike, and failing to do so, just sink the center stand into the sand holding the bike upright in place.

Kevin manages to right the 700lbs of bike, fuel, luggage, tankbags, cameras, tent, sleeping bags, mattresses, and camp “kitchen” (just missing the sink), before I manage to get back to help. There’s no damage, the drop guards and Trax luggage has took the this gentlest sort of down in stride, “The sand was deep enough that when I let off the throttle a bit the bike slogged, the front wheel pushed, and then it fell over.”

We press on, Kevin the hare, to my tortoise churning along though a dusk terrain of cactus and crumpled Baja topography on a mountain road that doesn’t invite error. We climb small passes. We descend into valleys. We hope that each water crossing is the final one before Mike’s. On a plateau fork in the road, we watch the sunset, and the sky settles into its darkening violet and purple, silhouetting the hills and cactus.

We’ve been on this road two hours. Filming has fallen by the wayside, and we’re about to break one of the cardinal rules of the Baja.

Back in San Diego, Ken Whalster, of BikeBandit.com, took the time to brief me on the Baja in his office the Friday before our border crossing into Tijuana. Ken has four common sense rules for Baja riding:
1. Never ride past gas.
2. Don’t mess with the military. Possession of drugs, bullets or guns gets you five years in a Mexican prison.
3. Never ride at more than 70% of your capabilities.
4. Don’t ride at night. There’s a saying down here, “Dark night, dark cow.”

By benefit of nightfall and limited dirt experience, I’m breaking the last two, but I do have a secret weapon.

Accessory lights are poserism, until you need them. Mounting the Twisted Throttle Denali LED’s seemed like another delay to our adventure, but now they are one of our best investments of time this trip. They illuminate the road with a wash of white light, complementing the Varadero’s already considerable output. Combined they also illuminate the pale reflective disks of yellow and green eyes looking on from the occasional bush as we round corners, leaving me less keen on simply camping part way.

The final leg into Mike’s is technical for a bike as large as the Varadero, a rough cut road of grooves, bumps, ruts and washes that descends into one final water crossing bracketed by sand on either side from a previous flood. We pull to a stop, to contemplate our lines through the creek for all the good it does in the dark. The crossing is an act of faith in momentum, and hope that the spring run-off and recent rains haven’t left it too deep.

The water crossing starts off shallow, then deepens. What’s under the water? There’s no way to tell at night. There’s nothing to do but plunge in, with a finger hovering over the kill switch, just in case, hoping to save the engine from ingesting water should the bike drop. Plow through hoping there’s no large rock for the front tire to slide off of, no slick green algae for you to slip on, no fine silt sand to sink into.

On the far side is a sense of elation, a steep rock and dirt driveway, and a dark Ranchero. No sound of generators, no lights, no cars and no people. We dismount, and wander the grounds, we’d phoned ahead, but are three hours or more late. Two dogs come out, and after 15 minutes of worried hunting we find David the caretaker.

David shows us where to park the Varaderos under the poolside metal roofing, scares up two beer, sorts our Spartan room, fires up the diesel heater, and provides a snack of chips and his wife’s salsa, then shows us around.

Outside, the white painted rocks marking the driveway appear to luminesce and the saw-tooth hills we’ve just ridden though are readily visible by the light of a bright three-quarter moon. Above, pinpoint stars transcend distance with billion year-old light, and breath hangs in the quiet air.

Inside is as quiet, we are the only guests, and there are stars here, though less glamorously illuminated. The LED headlamps’ pale spots play across the walls of the common areas, which read like a history of hardcore. T-Shirts from Baja 500 and 1000 racers festoon the ceiling, stickers are pasted to the windows and business cards are stapled to the walls. It feels like every important rally and dirt rider has preceded us here since the ranch’s 1967 opening.

We are a footnote, two men on improbable adventure bikes arriving at Mike’s Sky Ranch in the dark. It is a minor triumph, allowing us an audience with the spirits of champions.