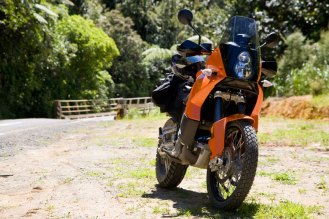 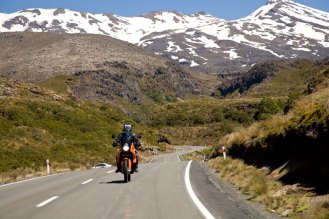 Most adventure riders, myself included start out with a light and relatively cheap bike to get them to their destinations. Two of the most popular options in that category are the Suzuki DR650 and the Kawasaki KLR650. From here, they ride for a season or two and either fall in love with adventure riding, or the motorcycle goes up for sale on eBay or Craigslist. In my case it was the Suzuki DR650, and it hooked me immediately.

The next chapter of my adventure riding sees myself sitting atop of a KTM 990 adventure. Although the motorcycle has flaws for sure, the sheer joy of it especially when standing make you forget about everything else. The guttural growl the V-twin emits makes you forget about that DR and its paltry 42HP and soft suspension. The KTM offers a sporty ride and has most of the gadgetry onboard to entice you, (minus a fuel gauge for some reason) and a hardcore attitude that hopes you’ll never look back or sideways. I didn’t look back, I kept looking forward.

The progression continues, my wife and I are on the same bike, plus camp gear, plus cameras, and kitchen sink and you start to think that perhaps the KTM isn’t the best bike for this job. So the internet hunt starts afresh. The blue glow from the other room cuts the darkness in our house on nights I cant sleep. Which seems to be a few. The answer in the end. A BMW R1200GS Adventure. Has all the options one could ever want, and a few you won’t need — I promise.

We ride the BMW, and as a shorter rider, one thing is glaringly apparent. It’s heavy, very heavy. Yet I put up with that, I knew that when I bought it. I bought it for the long stretches of highway between gravel roads. This is where it doesn’t disappoint. Yet the more I took it on the gravel the more I kept thinking I was missing something. So after abusing the bike and putting it through its paces circumnavigating Australia. The internet search is on again. The KTM stays as the 2up bike when needed. Not because its better than the BMW, but because it allows for more options overall in my opinion.

Luckily, there are a lot more options for the now mid range weight dual sport. So I start to read about F800GS’s, Transalps, Tenere’s and anything else that is lighter than an R1200GSA and more docile than a KTM 990 Adventure.

It’s the holy grail of adventure riding. Where can it be found? Right at the start. Most of us had it right at the beginning.

The DR650 started in 1990. So 20 years later, here we are with a refined masterpiece. Not a 6 year long production wonder filled with the latest gadgetry that will surely leave you stranded at the worst possible time. Not a motorcycle, who’s manufacturer’s answer to chasing down the glitches will be to release a new model. This is a true adventure bike in every sense of the word. It can handle highway running, and with care can keep up with most trail bikes.

If the DR had to be summed up in one word, what would it be? Reliable. The Suzuki DR650 will go on and on and on. If for some reason your stars just aren’t lined up and it breaks down, well its an air cooled single cylinder thumper. How hard can it be to fix? There’s no EWS, no ESA, no ASC… In fact there isn’t a single three letter acronym for “Neutering your motorcycle enjoyment” in the works. The DR650, like the XR650L and KLR 650, are simplicity; two wheels, connected to a frame, with a motor, a chain, a fuel tank, handlebars, suspension and a seat. Nothing more, nothing less. There’s a reason this bike is the staple of the Australian outback, an arid place where parts don’t grow on trees and dependablity is the difference between getting home from your adventure or becoming a tragic statistic.

For a sharply priced motorcycle the DR has some points and qualities the more expensive manufacturers should take note of. First and foremost, it is 365lbs. It’s heavy enough to have a bit of mass when touring on the road, unlike a trail bike. Yet it’s still light enough that a shorter rider to keep it upright if things go awry.

Another excellent feature the DR has is a smooth as silk throttle response. There’s no jerkiness just a linear acceleration. Something other adventure motorcycle manufacturers could learn from. Even with the low paper specs on power output, the bike can still attain a decent speed.

It’s not perfect, there are some modifications to be made, but that can be said for any bike.

The 3.4GAL fuel tank, while allowing the DR to get over 300km is a bit small for long distance work – just like the KTM 990 Adventure really. JustGasTanks (add a link) has a range available for the DR, the 5GAL coming in at $239.99, while the whopping continent cross without stopping 7.9GAL Safari tank will run you $549.99. Reality setting in, the 5GAL should do for almost anyone that isn’t tackling the Sahara or Australia’s Canning Stock Route. So, Editor Johnston will be pining for the 7.9GAL then.

A dual sport windscreen is a nice touch for the longer highway sections. Available again at www.procycle.us for a paltry $78.95… You’d be wanting one for you’re KTM 990 Adventure or BMW F800GS too, but the price won’t be near as reasonable.

The last “needed” upgrade would be the seat. There are Sargent or Corbin options available at $349 and $369 respectively from www.procycle.us. By comparison, have you spent a week on an F800GS? You’ll be off to the same manufacturers to outfit your wonderkind.

The last point where the DR650 falls flat is the suspension. It’s on the soft side for more tedious off-road work (Clarify the type of off-road work). Again an easy fix. A set of progressive fork springs and Race Tech cartridge emulators will set you back $255.90 from www.procycle.us , which is a great resource for all things DR650.

With the suspension upgraded, not only will the bike perform admirably on the rough, it will also be much more sure footed through the canyons. It becomes an exceptional all purpose motorcycle, built to personal taste around a rock solid platform.

To put it all in perspective. The DR is like your wife, your best friend or your confidant. It’s dependable, reliable, and puts up with you and your antics no matter what. The BMW is the “it girl” of the moment. The motorcycle version of Kim Kardashian, and while things are rosy right now, who knows the future of that union, and can you depend on her long term?. The KTM on the other hand is a high priced escort. You know the “relationship” is going to cost you, most wild flings will, and that bill will likely be ridiculously high, yet you still wander into it.

For me though, when it all comes down to signing the check, the final verdict is the DR650. I know it is for me, it is the first bike that I’ve ever regretted selling. Luckily, a quick internet search reveals new DR650’s are selling for $5,100USD right now. Set aside another $925 for modifications listed above and for just a “six pack” over the $6000USD mark you have a very confident adventure touring machine. Sure its not comparing apples to apples, yet the $8000 you save can take you where it really counts… on an adventure.