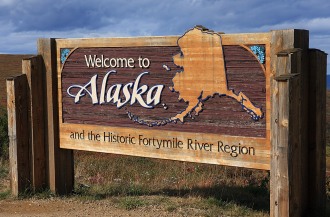 Dawson greets us with the rarest of commodities on this trip, a dazzling clear morning with just a hint of autumnal snap to the air. There is across the three of us a sigh of relief and an ease of travel tensions that can only come with good weather.

This has not been the easiest trip in the world. Friendships can grenade in the middle of Disney world, the shrapnel psychologically scarring innocents and destining them for a life of four o’clock appointments on the couch. The riding-fight of the Demspter, the continued cool to outright cold weather, a three-week period that has created entirely new classifications of precipitation, have all worn on us.

Sunshine is a relief then, a creator of a singular consensus of ride.

The ferry across the Yukon River from Dawson, delivers us to the Top of the World Highway’s southern terminus. The ferry does not dock, so much as plow into the shore at a moderate ramming speed like a whale in a minor beaching event. Best to hold onto your brake levers prior to arrival.

The road climbs upwards, through a series of loose curves on well maintained gravel to reveal Dawson and the Yukon River below, but the best lays ahead. Nearing the border with Alaska we’re awestruck by views so broad, so expansive, that the landscape and sky can barely contain them.

In a world of din without meaning, entertainment without depth, light without illumination and art without beauty, the view from the Top of the World is an uncluttered clear anodyne for the soul. Though you’d best take a moment to pull over, park and connect with it.

The road oscillates between long stretches of pavement and short stretches of dirt. It winds tracing the rolling topography of the glacially smoothed mountains with views of the Tombstone Range we passed through via the Dempster in the distance. It is warm, clear, unspoiled, and, as we ride upwards through turns that hairpin into nothing but blue sky, clearly masterminded by a madman, a genius or a mountain goat on the move.

You don’t blink, if not because of the views, then simply because the road clings to cliffs and convolutes around precipices. It’s not a massively challenging road, but the margin for error is minimal. At points the turns are impressively menacing, so now is not the time for riding heroics, but simply to take in one of the most heroic roads in North America.

We know this is not the “top of the world”. We’ve been as close as we can get by road in Canada at the small far flung pocked metropolis of Inuvik. Then we went further to Tuk, but the name for this road is so apt to call it anything else would be an insult.

For all its beauty, it is assessable. The Top of the World is a summer vacation’s ride away on roads that a Goldwing can ply in good conditions, and a far easier drive as the smattering of rented motor homes clinging to the cliffs like itinerant iceboxes can attest. Better, as a point of national pride, the most scenic portion is the 106 kilometers between Dawson and the Alaskan border, making astounding beauty available without a passport.

Not to discourage you from passing over the line between Canada and the US, especially if you’re into collecting extreme map points, because this is the north most border crossing in North America. Plus it will let you establish that these customs officers have one of the best office views in the world.

Like nearly everyone we’ve encountered in the North, the US border guard isn’t just relaxed, but downright hospitable and friendly in a vaguely Wild West sort of way.

“Ok, if we take some pictures?”
“Oh, sure, go right ahead, just pull the bikes out of the way.”

As crossings go, this is a relief because our KTM 990 Adventure has Ohio plates while the two BMWs are sporting Ontario registration and our documentation is somewhat incomplete. Should a border guard really want to make a fuss, we’ve little to demonstrate our ownership of the bikes except a growing rapport.

On the R1200GS Adventure this familiarity serves me well as the pavement ends at the border and we begin our descent towards Chicken Alaska, rushing away from the views and along a treed serpentine of road. Through the gravel and bituminous twists the big bike responds admirably, never faltering, never slipping and mountain goat surefooted. A neat trick for a bike weighing 256kg (564lbs) unladen, then loaded heavy with luggage, a tent, two sleeping bags, two air mattresses, two spare tires, and a rider in full (read heavy) gear… At a conservative guess we’re 850lbs of inertia tripping the light fantastic, with the engine rising and falling through the turns like a Wagner Opera. My admiration and respect for the GSA growing with each cycle.

Now if only Kevin on the F800GS and Glenn on the KTM 990 Adventure weren’t so far ahead. Still there’s a philosophical point here, the other bikes might be faster off-road, but from the plush comfort of the R1200GS Aadventure I feel like I’m more relaxed and in turn seeing more. No bad thing, because truly there’s been a lot to see today.