I’d boxed this guy up and shoved him away into a corner of my mind. I thought I’d moved on to more sensible things like adventure and touring, replacing this raving self with a better person, a responsible rider who takes the high road and chooses his moments. Then KTM comes along and hands this speed-ist hooligan a 155hp and 88.5 lb-ft of torque sledgehammer labeled RC8. Wham! The crate is shattered and we’re ratting across town and running highways in a “bleed orange” id enhanced rage.

You could send the RC8 to the far future and it would still look contemporary. Here in the present it is devastating. Grown men slam into doors gawking as they walk by. Twenty-somethings collect, drooling enough that passers by are in danger of slipping or drowning. This is how lawsuits start. But you don’t care, because you don’t buy a bike like this to be a subtle wallflower, if you wanted to blend you’d ride a Gixxer. 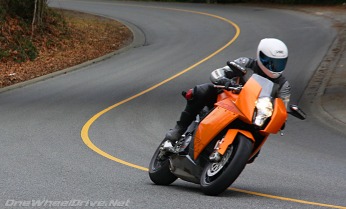 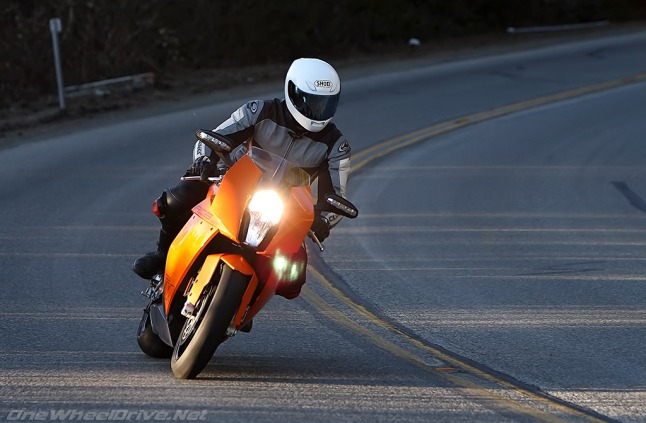 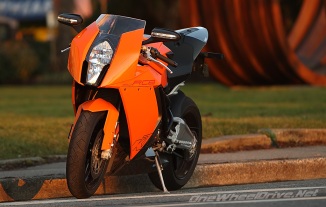 And the RC8 was built with an uncompromising monomania of fast in mind. Up front there are twin 320mm discs grabbed by 4-piston radial-mounted Brembo Monobloc calipers. There’s the premium and fully adjustable WP suspension. Topped with a steering-damper bow, the 43mm inverted forks up front sport preload, compression and rebound damping. The shock out back adds high and low speed compression damping to that list. The acreage of 190/55 Pirelli Super Corsa Dragon rubber out back, and the 120/70 up front, are mated to Marsochini rims. Stylish mirrors actually provide a rearward view of something other than your elbows. It has a gorgeous polished aluminum swing arm, and under belly exhaust to centralize mass. There’s a chromoly steel tubular trellis frame, using the engine as a supporting member.

At idle RC8’s wet clutch apes the Ducati dry-rattle, a comfort to those switching brand loyalties to something less common, or augmenting their current dream fleet. To the rest of the world it simply sounds worrisome, leading to the re-coining of the phrase, “It’s a KTM, it’s supposed to sound like that.”

Then you throw a leg over the RC8 the experience is like riding a petulant beast, straining at the leash. Below 2500 RPMs the RC8 lugs, suffering a distinctly un-twin lack of low-end torque and calling out for a shorter first gear. Crawling through traffic the orange menace lurches and surges. There are no secondary butterflies softening low-end response, the flywheel is made of helium, and the throttle is twitchy light. You’re forever feathering the light clutch and gingering the loud-handle to settle the psychotic low-speed lunging.

Combine that with shockingly powerful Brembo brakes and the worlds slickest seat, and the risk of a cruel interface between a male rider and the tank is high. If I had $10 for each time I gooned myself on the RC8, I’d have a good down payment towards the $20,898 CDN / $19,498 US sticker price.

It should be hateful, but somehow it adds to the KTM’s exotic drama. All the while you’re marveling at the contradiction beneath you; a snarling caged animal wrapped in ergonomics adjustable along the vectors of subframe, bars, pegs, levers. How do you like your bike? The ergonomic violence of a Ducati 1198S, or a gentler more civilized veneer to ward off your chiropractor after the 30th jerk of the whiplash throttle? The ergos are the sensible point your super-ego latches onto, something no other superbike offers.

It’s a frail rationalization. Beyond appearances, the RC8 makes no sense at all at in town speeds, the heat boiling off the bike’s right hand side (even at 8C/46F) expresses scarcely contained simmering rage at being subjected to such banality.

Then you get your chance. Throw the throttle open and the RC8 snaps off the line, 1148cc startles upwards through the RPMs. There is no instant on torque, but by 3500RPM the engine is coming to life. Freed from town’s traffic shackles the KTM sings hard and mechanical into the upper range with a manic furry that inspires giddy then nervous laughter.

Blitzing past the 6000RPM mark the digital tachometer graphs its way across the display to the 10,500RPM red-line in an eye-blink. Here the spin up is near 600cc-sportbike quick, the growing soundtrack only drown out by in helmet laughter. This is where the RC8 lives, in registers of speed that mark you an outlaw, on one of the most distinctive bikes on the road.

In these outrageous outbursts the KTM RC8 is addictively sublime, coursing with an uncompromising superbike purity which feeds your rider-id. The one-finger abrupt brakes become surgeon’s scalpels excising speed with fadeless delicacy, yet when maniac-wielded are just as willing to slash. The serrated low-end throttle control smoothes out, even as the vibration through the footpegs and bars builds, and the RC8 slices through speed limits legal and personal with an elegant violence.

Upshift, but with a firm measured jab. For all the sophistication, the transmission is slow-witted and requires more patience than one would expect of a superbike. Clutchless upshifts require careful and calculated execution, and come with the expectation of a false neutral. Our tester (unfortunately) had not received the 2009 selector star and clutch spring upgrade to ease the shift action, a necessary improvement considering the lubricity of the competition’s transmissions. Then the corners arrive and all is forgiven.

Suspension firm to the point of jarring at low speed holds the roads in a vicious unloving clawed embrace, while the rear tire’s soft rubber is stripped away by abusive torque.

The tip-in is light, elegant, rapid and planted, without compromising the RC8 to flitting instability. In the twists there is only a hint of vagueness – dial back the steering damper and that too fades. The RC8 is the world’s angriest ballet dancer, with a deportment more 600cc sportbike than large displacement twin.

Suddenly your retirement is filled with track-days as your super-ego acknowledges defeat and tries to sanctify the experience with a rational plan. In the helmet, your sensible self can only look on at the information overload of a dash display trying to discern the speed. With modes for road and track the fine print LCD information is illegible at a glance and misses a gear shift indicator and fuel gauge. Meanwhile the uncrated id-rider gibbers with every throttle pull.

Uncorked on the road, the RC8 is insolently easy to ride. On our “MotoGP section” traffic becomes pylons, and you can’t help but push. On the fifth pass I pull to the side, there’s a job to do, notes to make. On the far side of the highway’s divider a police cruiser bullets north at what now seems a ridiculously quaint speed. The KTM RC8 needs to be wrapped in such luck.

At a claimed 155hp RC8 is down on power over it’s nearest ecological niche-mate the 170hp Ducati 1198, but somehow the RC8 makes the Ducati feel absolutely calm and gentle. The RC8 has a raw, mechanical feel with lightning spin up, and no urge to coddle your imprecise humanity. By comparison the Ducati feels almost Honda smooth. On the spec-sheet the two bikes are strikingly similar, to ride though, the experience is massively different.

On the bell-curve of lunacy the feels Ducati is forgiving – thank the gods of traction control for that. The KTM RC8 is an outlier, with a brutal sense of drama – the poetry of Shakespeare enacted as a blood sport.

Abrupt and absurd, comfortable and hard-edged, the KTM RC8 is a passionate two-wheeled contradiction, until you realize it is designed with a sublime superbike purity that slices through the low-end faults. Consider your super-ego captured, crated and profoundly jealous, as the beast-orange RC8 unleashes your id-rider… and itself.