Heading south on the 10 out of St. John’s, the Multistrada and I aim for the Irish Loop, tracing the perimeter of Newfoundland’s Avalon Peninsula.  The Loop’s name originates with the Irish immigrants who settled this part of Newfoundland, and given the landscape they likely felt right at home.  You’ve seen this Newfoundland on every postcard ever sent, craggy red rock coasts, crashing blue waves, white foam, and seabirds mid-glide.

Thinking I know better than the GPS, I detour from the 10 at Tors Cove and strafe a nowhere road through Burnt Cove to Bauline East.  Bauline is a dead end without a dirt connector I posited “must exist”.  After ten-minutes sitting in the sun pretending to take snap photos, I u-turning back to the 10.

The coastline continues to stun with its sculpted, strained and ragged display, and fishing boats – it’s the boats that are unsettling.

Wrapped in scaffold on dry land, like a museum exhibition of nearly extinct whales, you can nearly hear the curator, “Once, these great creatures and their symbiotic primate companions fished the waters off Newfoundland’s coast, part of a collapsing ecosystem.”

This isn’t the future; on July 2, 1992 the then federal fisheries minister, John Crosbie, announced a moratorium on the northern cod fishery along the east coast of Newfoundland.  The moratorium was intended to last two years, but the cod never returned. Then in 1993 a similar moratorium was imposed on the south coast.

In 2006 the federal government reopened small-scale commercial and limited recreational cod fisheries. In 2007, it was estimated that the offshore cod stocks were 1% of 1977’s.

If you only visited St. John’s, all flush with its oil money boom, you wouldn’t see hard times, but along the Irish Loop reality creeps in with twilight-zone effect.  After fuelling up the Multistrada I wander into a general store. The age-old question has me curious, “What do people do here?”

A lot of men have packed up and are working for “big oil” in the Alberta tar sands, others have stuck close to home taking advantage of Newfoundland’s own oil boom.  The result is still eerie, you look around and wait for Rod Serling to intone, “But in this town, where did the men go?”

It’s the type of day you need to search for the disconcerting.  Between the scenery and sunshine my biggest concern is traveling any distance today.  Every corner reveals a new view begging to become a photo, a bit of video, or a memory.  I’m ready for the coastlines, I’ve braced for them, they are part of my tourist mental baggage, but 10kms south of Renews, the 10 cuts westwards and inland.

Barren, desolate, heart breaking and unfeasibly gorgeous, this is a different Newfoundland, a sloping rolling place with the veil of topsoil scraped away by brutal glaciation.  A harsh hard place, this what I imagined the Yukon would be like, except under a blue sky it’s better.  Wind sweeps across the lichen and shrubs so sparse they aspire to becoming scrub, and staring across this at a rest stop near the turn off to Saint Shots and the 10, it strikes me why Newfoundlanders are friendly.
It isn’t the well-polished stereotype that poor places are friendly because the people have to co-operate for survival and support each other through rough times, that is only a factor.

It’s this; Newfoundland conveys vastness regardless of actual distances.  Here, more than any other place, including the Yukon, there is a sense of lonely spaces between.

Nothing is hidden here, you see for miles, slightly inconvenient as I need to relieve myself desperately at a rest stop.
Newfoundland’s splendour is an untempered and untamed landscape that doesn’t even pretend to acknowledge your existence.  Then you round a bend and spot a tiny square house crouched against the horizon, laundry flapping, or the man fishing at a barely existent pond waves, or someone walking up the roadside waves…  Everyone here waves, it’s “hello”, it’s “how are you”, it’s “I’m relieved to see someone, because for a while there I thought I was all alone.”

You’re not though, there’s the Caribou – the most southerly herd in the world as a matter of fact.  In reality I don’t know much about these beasts.  They eat lichen, grass and shrubs, but more importantly they are delicious.  This I’ve learned thanks to the Grizzly House in Banff on a previous ride.

Unfortunately, I forget an oft-planned shtick of looking out over the vast barrens, pointing across the expanse, and in my best faux- Attenborough delivering the line, “I’m in Newfoundland, and if you look closely you can see the wild Caribou.  Majestic, the symbol of a province, and delicious.”

I’m still kicking myself for this cinematic gaff as I ride towards St. Vincent’s, then the sight of the beach’s sweeping crescent of gravel distracts me entirely.  If the view isn’t enough to grab your attention, then the sign reading “Caution: Due to High Seas Road may be covered with water or debris.”  Riding in heavy weather isn’t really an option in these parts, and that’s a concern.

This morning, the Weather Channel was full of portents of Hurricane Kyle.  That’s had me debating my best course of action, ride hard and fast back across the interior of Newfoundland, or take the ferry from Argentia to North Sydney, NS.  The former feels daunting with an entire country ahead of me, the latter can take as long as 17 hours and leaves at 2:00 in the morning.

In the end I settle on the ferry, after a quick dinner of the “delicacy” of Cod tongues. 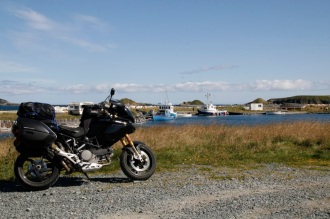 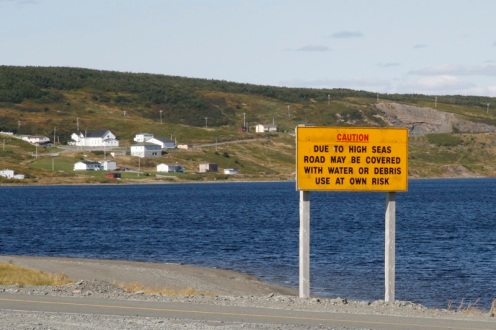 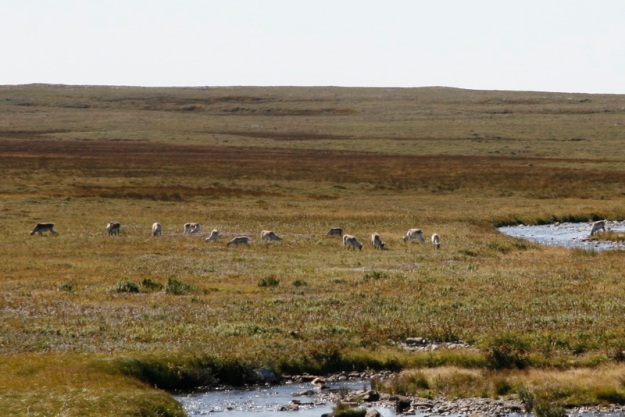