In 1535, as part of his second trip to Canada, Jacques Cartier became the first European explorer to sail the inland part of the Saint Lawrence.  Later, in 1613, the river served as the primary route the exploration of North America’s, pioneered by French explorer Samuel de Champlain.  Those facts from social studies never had meaning.  Now they are flooding back.  What the books don’t prepare you for is the vastness of the waterway, or the sense of the thing.

The ferry ride, from St-Siméon to Riviere-du-Loup (river of the wolf), Quebec is an hour long, if you wanted longer you could ride further along the northern edge of the river.  In the late evening light, I’m kicking myself for not bringing the camera to the upper decks.  They won’t allow me back down.

The ferry is old, rusting in places, well worn, and rather shockingly has wireless Internet.  Excellent, I can worry about tomorrows weather even here.  Something distracts though, a tinnitus ringing of history in the minds innermost ear.  Even as wait out cow-floating rain for a day in Riviere-du-Loup and ride towards the Gaspe Peninsula it’s there, a persistence sensation, this is where Canada started – the Eurocentric version 2.0, anyways.  There’s a resonance to that, I wonder if the locals feel it? Or if they’ve become so habituated to the sensation that it’s drown out?

Watching small cube-houses huddle on the banks of the Saint Lawrence against the winds, passing churches dating to the inception of our country, and inhaling the fragrances of fresh cut hay from the flowing farmlands, I decide no.  The sensation isn’t drown out, it’s become the core of a culture here, reflected in the dignity of all these small towns with neat lawns, tidy flowerbeds and orderly houses. The Saint Lawrence, for me seems a resonance of history mixed with a bit of pride… there’s not a derelict car on a front lawn in sight. 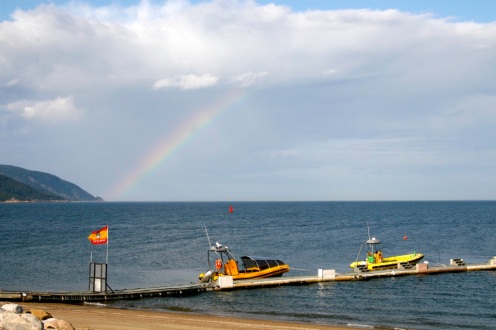 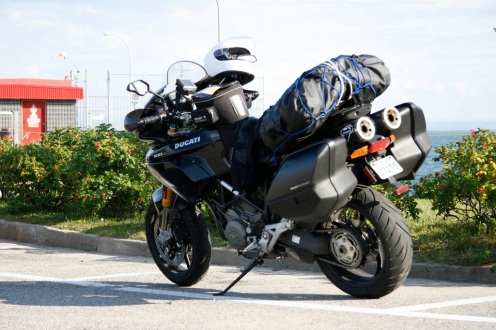