The River Song Café doesn’t open until noon on Sundays and that’s not helping my morning any.  I’m a breakfast person and right now my blood sugar level is off, riding feels like the toughest thing in the world.  I’m not a morning person, and this morning has had a unique start.

A French-Canadian woman has asked Rob for help, last night her boyfriend and his hiking companion arrived to Telegraph Creek… almost.  After hiking five days, the two found themselves separated from civilization by the Stikine River.  That would explain all the yelling back and forth across the river last night as my head hit the pillow.

The two hikers had spent the night across the river.  In the morning the woman had spotted us loading the bikes and asked us if we were riding to Glenora and could find Marty.

“He’s there fishing,” she explained.  “His campsite will be easy to find, he has the big pitbull.  She’s friendly.”

This works counter to my gentrified city-brain.  How could you hike five days and not have a ride across the river arranged?  Oh, never mind, I’m the man who headed north without a plan just to see how far you could take a stock bike and unprepared rider.  Rob’s laidback Alaskan mentality had no issues with the request and he readily agreed. 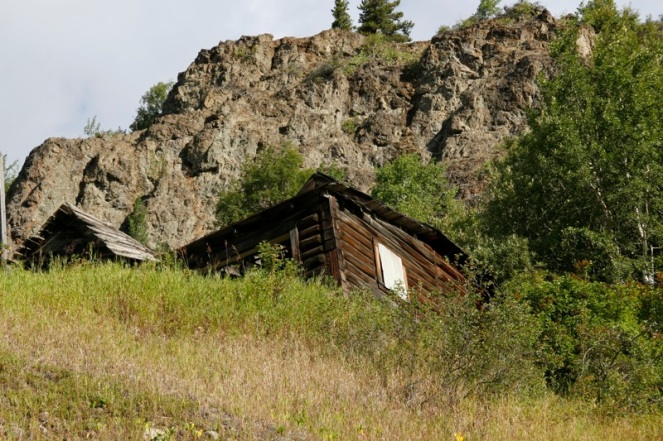 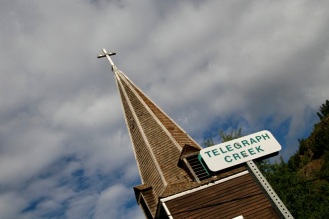 Now we’re on or way to Glenora on a “A Mission for Marty”.

I’m not at my most noble this morning.  The road is challenging me with steep up and down grades.

I keep repeating the phrase from Dune, “Fear is the mind killer, fear is the little death.”  At several point I almost turn back, intending to wait for the Riversong to open have breakfast and a coffee… most importantly a coffee.

Periodically you catch glimpse of houses backset off the road by long driveways, and I’m contemplating the first coffee-motivated home invasion.  At one rest stop Rob offers up a granola bar.  In reality it’s a processed corn-syrup product.  Rob and Grant ride on.  I slog.

I round a corner and there are horses on the road.  Livestock!  Yay!  Horses are an excuse to crawl along.  Shortly thereafter Colorado Grant shares some trail mix and Rob some pepperoni sticks.  A product of Oberto there’s no doubt that these are the greasiest creations the processed food industry has ever created.

“I bought them because they didn’t need to be refrigerated.”  Yes, you could also light them as flares in an emergency.

The odd breakfast hits my stomach and… I’m fine.  Better than that, the ride feels like game on.  We never find Marty, but frankly I don’t care.  After few quick photo stops back in telegraph creek, the ride is a go…  Better, I’m getting the 990 Adventure.  Really getting it suddenly.

The big KTM isn’t a bike of half-measures.  Its original incarnation was originally designed as a Rally Racer for the likes of the Dakar, but rule changes and its weight invalidated it from competition.  Despite being slightly revamped to be more road friendly and given a displacement increase the 990 Adventure hasn’t lost its edge.

Where BMW went down everyman’s highway, KTM has gone down hardcore’s gravel and rock road.  Gun it.  Brake hard.  Power out.

Whatever you’re doing commit totally and the KTM sings.  It wants to be mad and hard and fast.  The Garmin Zumo’s helping that, GPS zoomed in tight on my location I’ve the gift of 3-second’s precognitive advantage.  A hairpin is coming up, followed by a straightaway.  Brake hard, turn, and then lay into the throttle.  Gentler turn upcoming; ease off the throttle, stand up, tilt the bike beneath me and power through.  Was that some drift?  Or just more fun?

The 990 Adventure has lain in wait this entire journey longing to be ridden this way.  Suddenly I get this bike.  It’s clawing its way into my heart.  I can see myself “bleeding orange” even as it makes up for my deficiencies of experience and I abuse the throttle further.

Californian dry, the Pirelli’s are shining on the gravel road.  There’s a symphony of purpose as all vectors of right converge on the KTM.  We’ve enjoyed the scenery on the way in.  Now we’re enjoying the road on the way out.  Two of the trip’s best rides bracketing Telegraph Creek.

I come into Dease Lake on a sputter…  the low fuel warning light has been on for what seems ages, and that’s after I topped up with the spare gas can last night at the Riversong.  I’m hard pressed to feel any regret for my throttle happiness though. 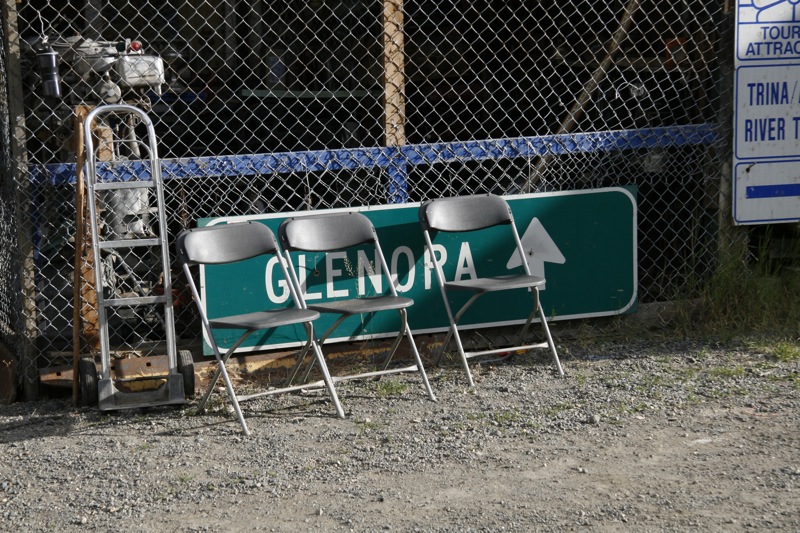