I’m doing something I absolutely shouldn’t; riding in jeans, t-shirt, gloves and a helmet.  I’ve just walked through the heart of Toronto to pick up our 2008 Triumph Speed Triple test bike from Rev Cycle’s General Manager Kevin Davis.  He’s warned me, the Speed Triple’s been into the shop since I rode it earlier in the week. They’ve fettled with the injection mapping to match the Arrow exhaust…  it has more low down torque.  Sure, right, because the Triple was so deficient before.

Easing the bike away ithe added grunt is instantly obvious.  Let out the clutch the bike pulls away of it’s own accord.  Around the corner I give the throttle a proper pull, there’s a bullwhip crack off the line and a gentle lift of the front tire into the air at 5000rpm.

Subtle as a bomb blast in Toronto’s core, the game is on.

First stop? The B&B for the leathers, the Speed Triple is leaving no room for leather jacket and jeans poserism.

Riding in Toronto is decidedly limited, but Speed and I have been to the twists earlier in the week.  For the moment we’re making do with onramps, offramps, exits, entrances, cloverleafs, and occasionally some properly twisty roads as motorcycling’s gods and demons smile on us.  Demons more like I think.

Lever the new and slightly lower Magura bars and the quick handling Triple lays low into the corner with ease. Planted and stable out goes a knee on a 20kph decreasing radius entrance to the Don Valley Parkway.  The satisfying sound of hard plastic on asphalt as the torque washes us strong out of the turn.  Those bars and slightly higher pegs add to the Triple’s composure, placing a bit more weight over the front and making it marginally less wheelie-prone. 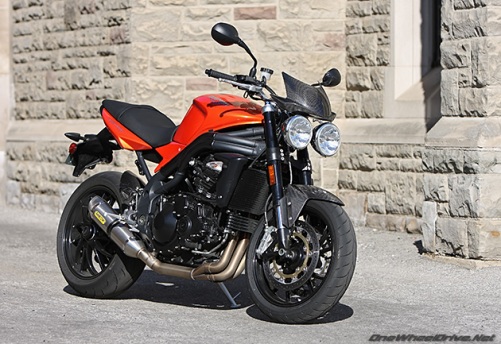 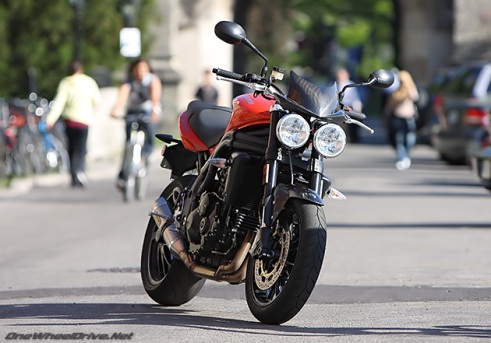 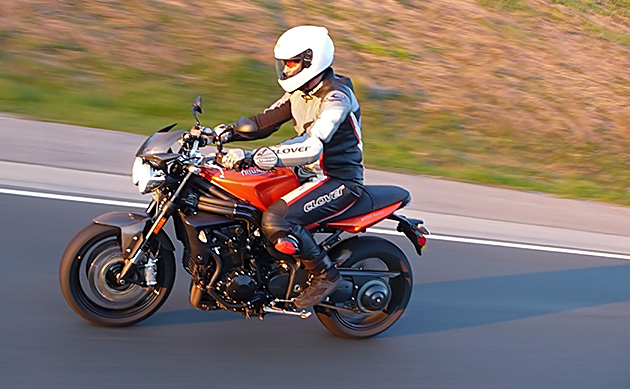 There’s traffic ahead.  A hard two-fingered squeeze on the new Brembos, an upgrade over last years Nissin stoppers, reveals a hard and abrupt feel.  Despite the new unit’s brand cache and they’ve been squeaking at stops though out the city, so I’m not entirely sold on this improvement.  Certainly though the four-piston radial calipers up front biting down on twin 320mm rotors and a two-piston caliper squeezing a rear 220mm disc are well matched to the bikes 416lbs mass.

Crank the throttle and immaculate fuel injection focuses the anger and rage of an English soccer mob rioting through the 1050cc inline-triple’s three cylinders.  The three-into-one exhaust strips away their voices, harmonizing them though the snubbed arrow exhaust into a howl of petro-chemical volcanism.  Fury feeds though the rear tire, leaving you no doubt what figure to look at.  Hint it’s not the 122hp this bike spun at the rear-wheel in its previous fuel mapping incarnation, or the stock 131hp at the crank.  It’s the 77 lb-ft of torque (stock figure) available NOW – with the Arrow pipe replacing the stock exhaust recon on 5 lb-ft added to that figure.

The torque cranks the rear wheel with angry sheet ripping make-up sex power… only reigned in by your throttle controls bondage.  Restraint never felt so good unfettered.  Nor this gearbox, Japanese-slick we’re snicking through the short ratios with abandon.  That alone dispels all doubts about Triumphs modernity.

Twist the loud handle and a violet wand plays across the pleasure and fear centers of your brain. A shiver snakes down your spine, a static tingle across your skin, and acceleration launches you ahead in a poetry of violence.  It’s eloquent, smooth, refined, controlled, yet mechanical and rich in feedback all at once.

Rolled on strong the front end raises by 5000rpm.  First, second, third… take your pick. 6-7000rpm and a feral vibration pulses though the bars, pegs, and seat clinically proven more effective than any Internet-available little blue pill.  Settle humped over tank and bars and revel in an storm of instant on acceleration.

By 110kph, your neck muscles are working hard and 130kph is a fight to look sideways to shoulder check, so as an expressway tool the Speed Triple hardly qualifies.  Unless oblong mirrors positioned just so you choose to slice and dice though traffic’s knots with to the arrow’s untamed “brat” reverie of rush.

Ah, more turns sweeps and twisties.  Not quite as navigationally imparted as I thought myself to be I’ve made it to the Forks of the Credit.  This time there is no bus stuck halfway through the hair-pins with the associated police presence to limit the ride.

This bike does such bad things to me and that’s excuse enough to shoot though the turns repeatedly in a groundhog day of lean angles.  The 43mm fork and rear shock, both with adjustable for preload, compression and rebound damping, prove their worth as a knee skims.

Oh ho, put that in your Mach Five’s pipes and smoke it Speed.  There may be no racer in the Triple’s name, but it’s better for it on the road.  There’s no twitchy flightiness of race chassis dynamics here, but a well though out road design.

There’s good feel even as the front pushes a slightly over a section of broken pavement, my signal to back off… Well, maybe once more though. We’ve come all this way to get out of the city after all.

Is the Speed Triple perfect?  No.  The quality of carbon fiber accoutrement is a bit wafty, but the furious look fits the bike so well I’d be first in line to order them.  The digital speedo set below the tachometer is well off you line of sight… and trust us you’ll need to watch your speed.  The pegs are high making the seating position tight for those over 6-feet tall.  The fuel consumption averaged 9.6L/100km is dear on the pocketbook.  It pumps out tons of heat.  Oh, and it draws college students like flies to honey, making photo shoots near impossible – actually that curb appeal could be pretty useful.

The Speed Triple is a short-blat of a thing though, an evenings escapade and weekends escape, a midnight rat race through the city all wheels up and stoppies, an afternoon kissing tire edges in the corners…  For a weekend of Speed Triple I’d gladly suffer a weeks worth of enviro-mental grey communist state public transit purgatory.

By the time I’m back in town, I’m completely bagged; the Speed Triple’s intensity has me beat.  I can’t stop though.  Some bikes you can linger over, write the review with leisure.  The 2008 Speed Triple is not one of those bikes, it’s a collection of transitory moments begging to be captured.  Even watching men on the street stop and contemplate the violent metallic “Blazing Orange” paint job, the flat black frame, the carbon fibre options, single sided swing-arm and star-burst rims, I’m longing to take the Speed Triple’s peak moments into custody.  One more rip through the a heady concoction of exits entrances and cloverleaves then…