Almost every bike has a one defining element, something that differentiates it in a crowded market place. Occasionally that’s luscious looks, cosseting comfort, prodigious power, outstanding handling (okay, I ran out of alliteration there); with the BMW R1200R you only have to dig as deep as that first good pull of the throttle. There it is, what defines an otherwise plain Jane “naked”… an engine that gouts torque like a Monty Python skit gouts blood. 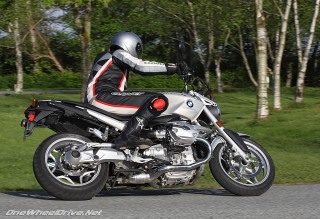 Almost every bike has a one defining element, something that differentiates it in a crowded market place. Occasionally that’s luscious looks, cosseting comfort, prodigious power, outstanding handling (okay, I ran out of alliteration there); with the BMW R1200R you’ve got to dig as deep as your first good pull of the throttle. There it is, what defines an otherwise plain Jane “naked”… an engine that gouts torque like a Monty Python skit gouts blood.

The stats don’t necessarily speak to the experience, pistons duking it out this “boxer” engine pounds out a claimed 85lb.ft. of torque at 6,000RPM. That means the new 1170cc engine puts out 17% more torque than the outgoing R1150R. More importantly the torque curve starts strong low down, and powers all the way through.

So as with most R-models a good pull of the throttle will lift the bike off it’s sidestand when parked. A result of whopping torque and the shaft-drives rotational inertia – a minor quirk balanced out by the lack of messy chain maintenance.

Having all that grunt on tap means you don’t have to be overly picky with your gear selection as you move through the six-speed transmission. Overall the gearbox is smooth, but occasionally there is notchiness on the upshift.

Ah, well, just pick a gear and ride though on the wash of torque stretching from 2000 RPM on… with a special bonus punch about 500 RPM short of redline.

North America always rides on torque but talks horsepower, so stat-sheet jockeys will be happy to see the horizontally opposed twin cranking out a decent 109hp at 7,500RPM. That might not stack up by sport bike standards, but the R1200R is more a jack of all trades than a specialist, and even BMW is remarkably toned down in the marketing blurb.

Phrases like “superb all-around talent”, “comfortable yet unflappable travel companion” and “more touring-oriented naked bike” deliver the R1200R in an understated manner. It’s either a case of excessive truth in advertising or the marketing department couldn’t find their thesaurus of superlatives. The R1200R easily lives up to these recommendations though.

The R1200R is svelte in comparison to its predecessor the R1150R, with a claimed road-ready weight of 223kg – that’s with all fluids in and the 18L tank 90% full. Combine that mass with a low centre of gravity and the R1200R cavorts through the corners with black-lab delight. Press on the wide handlebars and the R1200R will gleefully chuck itself into the turns.

Properly disrespected the R1200R is involving and a ton of fun – not quite what you’d expect from the conservative low-key looks. Despite being more reserved than a number of other naked bikes on the market like the KTM 990 Superduke or Monster S4R, in the right hands the R1200R can show up incredulous local sportbikers. Not bad for a “roadster” and this sort of behaviour is obviously best done in a 20 year-old Belstaff jacket for effect.

The suspension is supple making the R1200R a good choice for relaxed touring and rough roads. Pothole? What pothole? No upset at all, especially with a steering damper fitted to the front tele-lever.

Likely you’re sick of hearing it by now, but BMW’s front tele-lever and rear para-lever suspension set ups really do eliminate dive under braking… and a fair amount of feedback. Strangely, the lack of communication up front doesn’t seem as prominent with the R1200R as it is with the R1200S say. Part of this is because the R1200R doesn’t put on sporting airs, the rest is likely weight distribution. Even in the damp the R1200R offers enough feel to resist praying to BMW’s technological boffins, rather than relying on feedback.

That additional sense of security applies to the R1200R’s braking. Squeeze the lever and what’s that?

Silence. No servo-mechanical whine as the calipers execute a death-grip on the rotors. BMW’s semi-integral ABS braking has gone manual. Applying the front-brake still engages the rear, but the rear can be independently applied. No more braking shocks and drops when you tap the rear to moderate parking lot speeds. Let’s just call that refinement, rather than backtracking shall we?

The rest of BMW’s technological alphabet soup can be applied to the R1200R, so if you’ve a taste for expensive irony you can have one of the most technologically advanced bikes on the roads in a simple looking naked package. Options like the TPM (tire pressure monitor), ESA (electronic suspension adjustment), ASC (automatic stability control system) grace the list. Honestly the one you need most is the fly-screen, allowing you to sustain highways speeds in relative comfort.

The glitch in that recipe for touring bliss is a high frequency vibration exhibited around 100-110kph, the speed also known as highway legal. The buzz burrs the mirrors into uselessness and intrudes on the ride experience through the bars and pegs. A pity, because the rational rider ergonomics scream for jotting off on something further flung than the local coffee run.

The R1200R draws more deeply on BMW’s R-model history than the oddly sculpted likes of the GS, and the bikes strong visual continuity will connect with “old school” BMW riders. The surprise is that the R1200R with its adept handling, brash amounts of torque, modern technology, and a playful character has the prowess to reach a much wider demographic of rider. Now, BMW, if you’re reading this please don’t pull a Rockster and offer the R1200R in lurid lime green, sometimes a sleeper is better served by understatement.