Riding into the city the dome of the windscreen reflects the Lion’s Gate Bridge’s lights in a moment of cinematic grace reminiscent of David Bowman’s face shield in Kubrick’s 2001: Space Odyssey. The clocks are marked with fine point font, thin elegant needles, and the chrome bezels reflect a glittering world.  The cowling amplifies the “desmo” clatter as mechanically actuated valves open and close.  The Ducati Sport 1000 S is a paradox, simultaneously embodying a romance between history’s view of the future and the present’s fascination with the past. 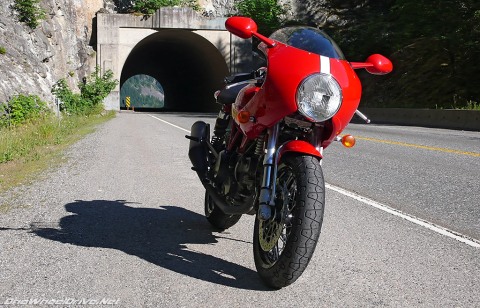 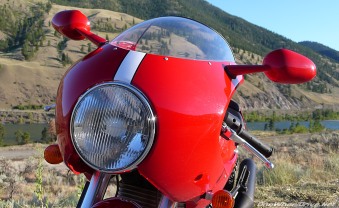 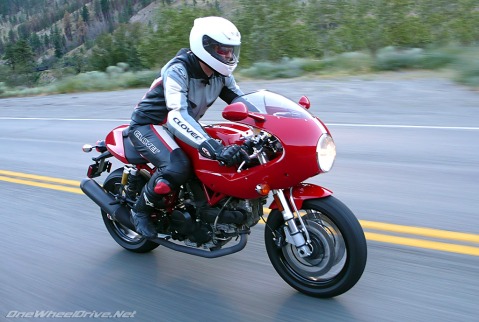 The evening’s ride, a jaunt up to Lion’s Bay and Cypress Bowl from downtown Vancouver, ends with the Sport 1000 S parked in front of a coffee shop.  Ending is a quest for gelato this seems the near perfect outing for the bike.  Not too long, full of sweepers, a few tighter twists, and a bit of café racing flair on a warm summers evening.  It is a timeless mixture.

Ticking as it cools, the 90-degree L-Twin deserves a bit of rest; on the way up to Cypress Bowl it issued pure motorhead music.  Rolling on the throttle in favourite corners, the air-cooled plant delivers an addictive surge of power from 4500 to 7000RPM.  The output culminates in a peak 58.5 lb-ft of torque at 5900RPM.  With over 50lb-ft available over a majority of the tach’s sweep, the S has the sort of midrange that keeps 600cc sportbikes awake at night…  How, they ask themselves, did “old school” leave me behind?  Meanwhile their riders will be shocked at the effectiveness of the engine’s spec-sheet meager 92 hp@8000RPM – thanks to all those “torques”.

At night you’re forced to trust a bike, the dark robbing of visual acuity without the dangers of a blindfold.  Coursing up and down the mountain, the Sport 1000 S shares its secrets, even as the single headlight does its duty.  High-beams illuminate a rough corner; the front end jostles on the unadjustable 43mm Marzocchi inverted fork but not enough to encourage backing off.  Still the bike would benefit from adjustable front forks, allowing the rider to settle it a bit.  The direct action twin rear Sachs shocks, complete with golden old-school piggyback reservoirs, provide back-to-basics competence in comparison to linkage-equipped suspension.  They hold the road well though, despite our only moderately dialing in their adjustable preload, rebound and compression damping.

Into a hairpin we burn off entry speed with a two-fingered pull on the adjustable right-lever.  The two-piston sliding-pin floating Brembo calipers clenching dual 320mm front discs. Tied together with braided lines the feel at the lever is strong and linear with a mild initial bite – in a street setting the stopping power is ample.  For more aggressive riding all fingers are exercised.  Out back a 245mm disc out balances the setup nicely.

A firm press of the bar initiates the turn in, revealing the Sport 1000 S to have true Ducati sensibility – stable, planted and almost heavy.  The initial turn-in effort, the result of a steering damper and minimal leverage provided by the aggressive low clip-ons, ensures that the S makes you earn your corners.

Weight the inner peg and the S heeling around quickly.  In comparison to the fabric softener refinement of other sportbikes, you’re an active participant in the riding process – I rather like that.  Once set the S rails through the corner brilliantly.  The retro-inspired, but thoroughly modern, Pirelli Phantoms gripping the road in a way that belies their and the and black-finished spoked aluminum rims’ classic looks.

Earlier, on the flowing and smooth fresh pavement of the Sea to Sky’s “MotoGP” section to Lion’s Bay the S showed where it lived, and it’s not the wobbly old 70s, as it flowed through the sweepers in third and fourth turning in elegantly and holding the line to near perfection.  Have such roads handy?  The S begs to be your Sunday morning bike, quick ride and a coffee before the roads become clogged and over crowded.

The next day sees the Sport 1000 S and I undertake a more audacious outing, riding from Vancouver to Sun Peaks outside of Kamloops, B.C. – a mere 410km (254mi.)   Having rode the 2006 Sport 1000 through the Canadian Rockies and I should know better.  Some may say that it’s not what you ride, but where you ride it…  You say “potato”, at 6”2’ in traffic , I say this bike is frinkin’ trying to kill me.

Using the Sport 1000 S for commutes or highway drones? To put it delicately, the aggressive ergonomics offer evidence of a Ducati family history stretching back to the inquisition – for whom they surely designed instruments of torture.  The low drop bars place an impossible amount of weight on your wrists.  The laid-out seating position with high, back set pegs strain your lower back.  And there’s remarkably little legroom despite the 32.5-inch seat height.  Heat roils off the rear cylinder located between your thighs roasting them and the bits between.  It’s the motorcycle equivalent of a hot yoga class consisting of 8 hours of “downward-dog” accompanied by draining vibration.  Except you’re dressed in leathers and craning your neck to see ahead of you, as if your life depended on it… Oh, wait, it does.

Hit 120kph (75mph) and the wind changes everything; air flows clean over the screen, pushing against your chest and lifting the weight on your wrists.  The air-cooled engine receives its due, streaming heat behind, rather than onto, you.  Hit the sweepers, gain some speed and the Sport 1000 S is transformed into bliss, the payoff for your in-traffic anguish.  If only these roads were more convenient? If only there wasn’t a city between this bike and its utopia?

Out on the straights you slip upwards though the gears using the quiet wet clutch with moderate effort at the lever and positive refined feel at the shifter.  The Sport 1000 S sings upwards to 215kph (133mi/h) on the track, while you keep an eye for the blue-and-reds in the surprisingly functional rear-views.  On a litre bike that speed feels like a segue to the “real” riding, but to the L-twin’s pompone accompaniment hitting such marks is truly satisfying.  It a pace I’d never dream of on the unfaired Sport 1000, but the tucked behind the S’s fairing you realize this is a legacy of the 70s that works well beyond visual charm.

Does it matter that the S isn’t scary fast? Not a bit, because such a large component of this bike is about being seen – hard to say that about anything painted Kawasaki tree frog green?  The welds are lovely, clean, and painted.  There’s a feeling of solidity and style to it.  You could call the color “speeding ticket red”, but it has too much depth and class for that.

A product inspired by a hedonistic era, should you be pulled over the bike’s design is so phallic I’d expect a lot of awkward silences from the cop.  Encourage this, use sibilate esses, “The papers, oh, their under my broad and supportive seat!”  Yes, even the look is a paradox.

Detractors from the Sport 1000 S?  Quoting ergonomics betrays a misunderstanding of the bike’s retro-inspired experience – the Sport 1000 S is a complement to your dream garage’s practical all-rounder.  More irritating is the eyesore the charcoal “evap” canister hangs off the engine’s side, a device that self-defeat’s its ecological purpose – garbage bins will be full of this piece of plastic.  Ducati should develop a return program do they can simply recycle the unused canisters removed by Sport 1000 S owners. The kickstand, too, is an exercise in non-design, the nub is only just accessible to be swung forward by foot – a stock component lifted from the parts bin.

From an aesthetic perspective I miss the asymmetrical stacked pipes and swing-arm from last year’s sport classics.  The pipes have been replaced with shotguns mounted on each side moving the bike closer to its retro inspiration visually.  They beg to be replaced with aftermarket to uncork the 2-valve desmo’s potential and song.  Still it’s hard not to be drawn this ode to Fabio Taglioni’s 1970s stylings on the evocative looks alone.

The Ducati Sport 1000 S is a triumph of man’s romance with a history of speed, a notion that overcomes common sense and even physical pain.  Other than tupperwear, bell-bottoms, lapels and some wallpaper with red Ducatis on it that looked suspiciously like the Sport 1000 S I had as a child, I don’t remember much of the 70s.  Thankfully I don’t have to for the Sport 1000 S to hold my imagination and desire.  In the summer it would make a great second bike, and in the winters one can steal away to the garage and simply revel in its look.