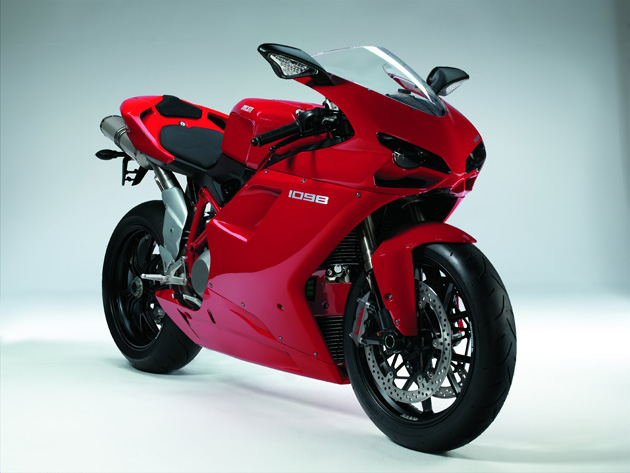 Here is a name you should know, Claudio Domenicali. When it comes to selling off a few spare organs or checking the black market index to determine the value of your children this spring it’s likely going to be Mr. Domenicali to blame.  That’s because as Ducati’s head of new product development Mr. Domenicali is being touted as the man responsible for the 1098.

As Domenicali stated in a recent Telegraph regarding the 999’s replacement, “The bike will go back to 916 styling cues, with cool surfaces and radiuses, nothing unnecessary; it will be very Italian, very sexy and elegant.”  It seems an understatement as fresh pictures of the 1098 hit the web in advance of the 1098’s November 14th launch at the Milano, Italy show next week.

The 1098 looks like seduction on two wheels with orders of wanton debauchery and danger on the side.  It makes you wonder what Ducati was thinking with the 999, a bike that was God’s own to ride but looks wise was likely an evolutionary jump whose design came 20 years to soon.

The folks at Ducati obviously were wondering about the 999 too.  The 1098’s production run, which starts January 1st, 2007, marks the end
of a design project that started a mere year after the 999 hit the market in 2004.  With Domenicali at the helm of the 1098’s development it’s
an easy bet that the new 916… er, I mean 1098 is not just an exercise in heritage inspired design.

Given that the former Manager of the Ducati Corse Team has been noted for work focus and racing successes, you may just want to start booking your track dates now.  The spec sheet indicates that Domenicali has been working from his strengths, the “base model” 1098 biposto is pumping out
a claimed 160HP claimed (versus the 999’s claimed 140 HP), the new ‘Testastretta Evoluzione’ engine is some 5 kg lighter.  Even the overall
chassis weight is down, below 399 lbs – so lets assume the Monobloc Brembo radial calipers will have no issues bringing it to a hauls.  Even the
frame new, designed for the track it features larger diameter / thinner wall tubing – especially the oversized tube directly below the bottom fuel
tank line.

Need further evidence that Domenicali is all about making people go fast? There is the 1098S and beyond the front and rear Ohlins suspension and carbon fiber bits, it’s accompanied by 3 CDs of software and sports a USB plug.  That software allows you to download trackday data for analysis and that’s a production bike first. The uber-geek, and your reading this on the web so likely we mean you, can swim the data channels including throttle opening, vehicle speed, engine rpm, engine temperature, distance travelled, laps and lap times.  The software also calculates engine rpm and vehicle speed data to display gear selection. Yes, you can relive up to 3.5 hours of track time in staggering numeric detail – now if only that could be fed into
the Xbox…

What’s missing for 2007 is a 1098R, and there might be a good reason for that, pumping out 160hp the 1098 is encroaching on the Desmosedici’s
claimed 200…  An R bike, or so rumor has it, could be reaching the same stratospheric figure.  There would be no sense in Ducati poaching
its own high-end market, at least not until the Desmosedici’s limited production run has been finished, but it gives the power-mad something to dream about.

Looking at the 1098, with its double cannon 916 mufflers in the air ready to out-shout thunder, a rear single-sided swing-arm said to be inspired by
a 747 landing gear knuckle, the new 1098, it’s as if the 999 simply had not happened.  You’d swear that the 916/996/998 simply continued
to evolve.  One wonders just how far this revisionist design history extends?  Are there any pictures of the 999 in the halls of Ducati or on the walls of Domenicali’s office? Luckily we’re traveling to Bologna to find out.