Ripped from the imagined pages of conglomerate run newspapers, a paragraph summary of the Canadian Thunder Series final would likely leave you drowning in a puddle of your own drool.  “The Canadian Thunder Series, a series dedicated to air cooled twin motorcycles, concluded Sunday September 3rd, 2006 at Shannonville Motorsport Park (Shannonville, ON) with its 7th Race…

On the podium were BMW riders Oliver Jervis (#125) of Victoria, BC, with a winning time of 19’56”, and his teammate Michael Taylor of Toronto, ON in second, some 2.399 seconds behind.  Third, this rainy race day, was Paul Penzo (#21) of East York, ON astride a Ducati PS 1000 LE following 5.010s behind.  Darren James (1), of the Ruthless Racing team, lead the points standings for the series and secured the National Championship.” 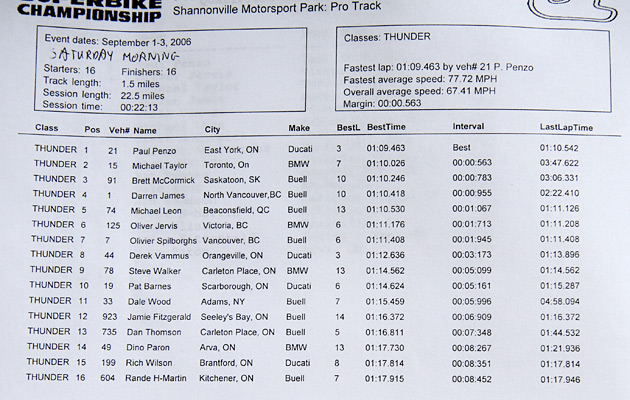 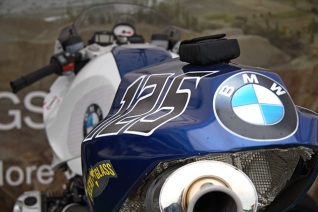 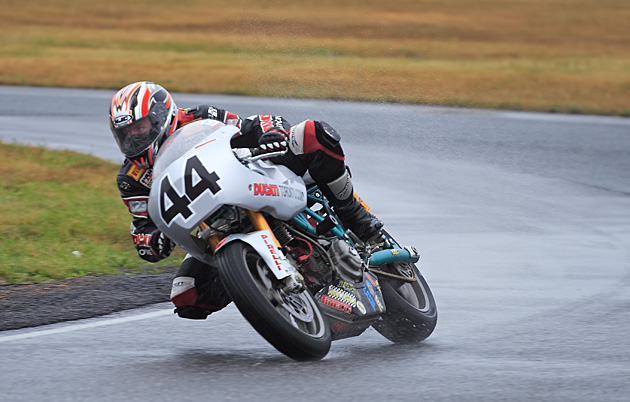 That chalk-dry, horse-pill-hard-to-swallow, two-column-inch, wizened and dehydrated info-puck misses every element of why the Canadian Thunder Series, and racing in Canada in general, should matter.  It omits the spectator’s heartbreak at watching 15-year-old racing impresario Brett McCormick crash. It skips how the upstart Ducati Toronto team with journalist Paul Penzo piloting a near stock Paul Smart LE displaces the factory team from the lead. It shuns the psychological interplay between racers, the politics between teams. It steals the strange sense of family and camaraderie that when the racing is done still suffuses the pits. It robs you from knowing what it’s like to be a fan shaking hands with a hero, and then realizing the hero is just a person struggling to fulfill his dreams and passions.  So, as with all things dehydrated, lets add some water shall we?

Saturday September 2nd: As the practice sessions take place the weather has racers, organizers and spectators alike watching the skies. Yesterday, the race organizers hurriedly decided to hold the qualifiers a day early to avoid the wet.  This afternoon cycles through a meteorological rollercoaster of mist, rain, and brief respites that bring false hope of a dry track.

In the paddocks though, the racing has already started as racers position to gain a psychological advantage over their opponents.

Cycle Canada journalist and racer Paul Penzo has his team making ready to shod his Ducati Toronto Paul Smart LE with Pirelli Typhoon rain tires – or are they?

Penzo confides, “I want Derek [Vammus] to think we’re going out,”, “if he goes out in the rain he might lose confidence.”  A sibling rivalry has sprung up between Penzo’s and Vammus’s teams over the season, with Vammus being the factory’s favorite son at the moment and having its backing.   Both may ride Ducatis but that doesn’t make them teammates in this “gentleman’s class”.  Penzo and Vammus are as competitive against each other as with the Buell or BMW riders, maybe more so.

Implicit in Penzo’s tactic to “encourage” his competitor out onto the track is the potential that Vammus may “go down” during the wet practice session, eliminating him from the field.  Most of the factory supported riders here have a “B-bike”, a backup in case their primary race machine meets with mechanical issues or an untimely end.  Today, however, Vammus has one life to live, the B-bike is stuck in customs having been on show stateside last week for the Ducati Dealer meeting.

Kevin Davis, of Ducati North America, subtlety attempts to dissuade Derek from heading onto the track.  The Vammus Ducati Team represents a considerable investment of resources for the company.  If the A-bike goes down then that’s one less chance for a Ducati on the podium.

I’ve been walking between the two camps, listening and soaking it all in.  For a change I’m doing my best to observe without interfering or passing on information, making this my anthropological expedition into the dark heart of National Series racing.  It’s difficult to remain aloof.

Unlike the AMA, or the golden boy of racing the MotoGP, spectators can walk up to the racers of the Canadian Thunder Series, talk, shake hands, wish them luck and feel a part of the event.  Very quickly I’ve realized I’d be happy to have the riders I’ve met, Paul Penzo (Ducati), Derek Vammus (Ducati), Oliver Jervis (BMW) and Brett McCormick, as friends.  More important, despite the competition there is a sense of camaraderie; looking down the rows of makeshift tents racers are chatting, joking and sharing the occasional tool.  It is the strange contradiction you see in all competitive sports, “We’re all in this together, but all against each other.  Tooth and nail on the track, followed by beers after the race”

Vammus does go out in the rain without mishap, “It’s wet and I still managed to get a knee down.” More important, he has gained valuable information allowing his team to refine the setup of the PaulSmart1000 LE.  As if undermining the Ducati Toronto Team’s psychological play, Vammus comes back from the wet practice with greater confidence.

Vammus has good reason to feel better about the Paul Smart beyond the wet weather suspension setup.  During Friday’s qualifier there was a throttle issue; “I’d be hard on the gas and nothing would happen, like it was topped out way too early and not getting enough fuel.”  It turns out that the throttle was only actuating to three-quarters open, a problem sorted only this morning.

Vammus has been reflecting on a disappointing Canadian Thunder Series opener at this his “home” track, back in May.  The 36-year-old police detective was “sent off the track” during the qualifier – the issue was a shift lever angled too low, so that at lean the bike was pushed startlingly out of gear.  The qualifier determines the placement riders receive on the starting grid come race day, after breaking the air-cooled twin lap records during testing, it was a blow to Vammus to find himself demoted to 16th on the grid.  By the checkered flag Vammus had fought his way through half the pack finishing 8th for the race.  Back at Shannonville, Vammus is a man with something to prove.

The accident was primarily an issue of the lever’s setup, but it raises an interesting point about the Ducati SportClassic PaulSmart1000 LE that both Vammus and Penzo are racing; though derived from a racing lineage, the 2006 bike has never been raced before.  There is no knowledge base of other PaulSmart1000 racers to call on and no selection of Ducati Corse race components to order – in racing terms this bike is uncharted territory.  Both teams in essence are on their own, and both have take a different approach in dealing with the bike’s quirks.  Paul Penzo’s bike is sporting near stock suspension, and seems to be performing well for him.  Setup issues are minor.  Derek Vammus has been having a more troublesome season.

John Cornwall of World Superbike fame has set up the suspension on Vammus’s bike, potentially with mixed effects.  The PS rear shock is designed without a linkage, meaning that the shock has to travel farther than on a conventional design, it’s been making set up tricky.

A shadow of doubt crosses Vammus’ face, “I’ve always been about feel.  When I have a bike whose setup I’m happy with, I go from mediocre to a super-star; that’s my weakness.”

“Last year’s bike development [on the SuperSport 1000] was a slow work of art, an oil painting that you add strokes to.  This year it’s a watercolour; a wrong stroke and you end up crumpling up the page and throwing it away.”  This year with factory backing there is the money to make sweeping changes to the setup and the approach may be problematic.

Derek takes a moment and clarifies, “It’s trouble with our setup, not the bike.”

Race day finds a surprisingly frank Paul Penzo in the Ducati Toronto paddock, admitting that the previous day’s gambit to get Vammus out onto the wet tracks for practice may have backfired. Penzo is now concerned that his bike’s suspension may not be properly set up for the rain.  “I’m not much of a rain rider.  We’ve softened the suspension, but I should have ridden the practice in the wet to make sure.”

There’s a moment of suspicion, but then looking at Penzo’s face I see the thought of a wet track is a genuine concern.

If you’re rightly asking, “Why all the Machiavellian soap opera drama?” , the answer is simple; this is a very competitive class and every advantage counts.

Limited to a 3.8:1 power to weight ratio and with treaded DOT tires required, every bike here, be it Ducati, Buell or BMW, is a potential contender.  For the spectators it makes for exciting racing; even in the qualifier the top seven riders were held within a one second spread.  Don’t think air-cooled means a “slow” race either; the feverish pace is only three seconds off that of the 600cc class’s leaders.  In an environment like this that means whatever edge can be gained off the track can be capitalized on. Vammus puts it best, “This is a 20 minute race.  It is a mental game, if you lose any confidence then the other guy has an edge.”

In that context the race viewed from the grand stands is only the tip of the competitive iceberg. Who arrives on the podium is culmination of the game of off-track chess that’s been taking place since the racers arrive in truck and trailers, and a bigger game that has played out over the entire season.

Penzo steps around back of the tent to “put on his race face” while puddles of cold rain glisten with sweet smelling race fuel.  These dramas play out across all the tents, and yet down the end of the row one racer borrows a wrench from another.  Glistening pockets of respect sit on the surface of all this competition.

Earlier I’d asked Derek Vammus what he’d though of Paul Penzo’s race season, “He’s riding better than I’ve ever seen him ride.”  Now, I wonder what effect those words would have on his Ducatista compatriot.

On the track he’s been called “prodigy” and “phenomenon”, but 15 year-old Brett McCormick might be more than that.  He could hold the key to the future of motorcycle racing in Canada, the same way he holds the respect of other racers.