There is power here; I felt it first riding along the serpentine asphalt that serves as the entryway to Laguna Seca.  Now, stepping out onto the pit lane the energy intensifies, the new-age types might have Sedona but there is no doubt that a confluence of motorsport Ley-lines meet here.  I feel a tingle in my stomach and on my skin as I’m escorted through the Ducati paddock and out onto the pit lane.  Standing there under the long shadows and the soft evening light are Loris Capirossi’s and Sete Gibernau’s Desmosedici MotoGP bikes, bracketing for a public consumption MotoGP replica, the Desmosedici RR.

Surrounding the bikes at a respectful distance are about 30 Ducatista, celebrities, and press, creating a small quiet gathering. Suddenly, I feel like a hick that has crashed the country club, with a pass begged from Revoluzione and a t-shirt with ironed on logos.  I don’t know whom to talk to, or even if moto journalists talk to each other.  The Desmosedici RR comes to my rescue, drop dead gorgeous and begging to be photographed.

I find myself lying on the ground taking upshots and contorting shamelessly to get angles.  The three bikes are close together and my elbow ends up resting against Sete’s race bike.  Either no one notices or seems to mind.  The question is do I wash my $13.00 hair cut after it has touched what is easily a million dollars worth of bike?  Probably, I’m big on hygiene no matter how star struck.

No doubt this bike is a star, when it arrives on the Market July 2007, there will only be 400 of this limited edition made, and Ducati has no plans to transplant the sand-cast V-Four engine to other production bikes.  I ask a Ducati representative about power, and I’m told to expect “over 200 hp [at 13,500RPM] once breathed on with an after market ECU and racing exhaust.”   With the 989cc four-cylinder ‘L’ layout engine pumping out figures like that the Desmosedici RR goes from elegant and stunning to sensational – a supermodel who not only cooks but likely is an assassin on the side and dabbles in world politics.

More importantly this engine is a huge step for Ducati, which has not introduced a non-Twin engine since the 1973 release of its desmodromic valve design.  That means even in the context of a limited run the Desmosedici is history making, but its development is no flight of fancy.  When computer simulations found that a twin-cylinder engine would not be able to produce the 230hp required to be competitive on the MotoGP track, at least not without revving to over 17,000 RPM.  The solution?  Continue the traditional V-90 layout and desmodromic valve control but in a V4 configuration.  That means 16-valves and so follows the name Desmosedici.

From every angle you see the MotoGP underpinnings of the Desmosedici.  Slippery aerodynamics are courtesy of carbon fiber panels only vaguely modified from Sete’s or Loris’s mad beasts.  The seating position is just as extreme also, losing none of its track aggression in the translation to the seat.  The dash, developed in collaboration with Ducati Corse, is the same that will be fitted to next year’s MotoGP bike, the GP7.  The geometry of the red hybrid trellis frame is the same as Ducati’s GP6 bike currently gracing Laguna Seca, while the rear seat support is sculpted from high temperature resin carbon fiber.  Just to complete the GP for the road experience, the cast, forged and pressed aluminum alloy swingarm is directly derived from the race bikes.  The length is intended to provide a high level of traction control.

Looking at the golden 43-mm upside-down Ohlin FG353 pressurized forks with TiN coated sliders I can’t help but wonder if I lick them whether the bike will become mine.  I restrain myself from making any such DNA claim on the bike.  The front suspenders are fully adjustable for preload, rebound and compression.  While the rear Ohlin features rebound, high/low speed compression and hydraulic preload adjustment.  Though I’d not expect anyone to be dialing it in for two up riding, especially given that the 4-into-2-into-1 exhaust culminates in a “vertical exit” silencer hidden in the tail cover with unsightly “pipes” giving way to metallic mesh.

Wondering what it sounds like?  We can only speculate, but having heard the Desmosedici GP6 at close range, I’d wager it is unlike any other Ducati produced, with the optional 120dB racing exhaust carrying it closer to the race bike.  The track going  GP6 is a raw, savage sounding beast, a fusion of the L-twin’s basso perfecto twin moderated by the mournful howl of an inline four.  The sound is unlike any other on the MotoGP track.

The evening winds down and even as the Ducati technicians start to roll away Sete Gibernau’s and Loris Capirossi’s Desmosedici MotoGP bikes back into the paddock, I keep shooting.  Without the other bikes in the way, the Desmosedici RR stands on its own, shame facedly a Ducati employee asks if I can take their picture with the bike, “We’re not supposed to act as if this is a big deal.”  For me though, I’ve shown my hand way earlier in the evening because the truth is this bike stuns in person more than any press kit picture can ever hope to and that makes it a big deal. 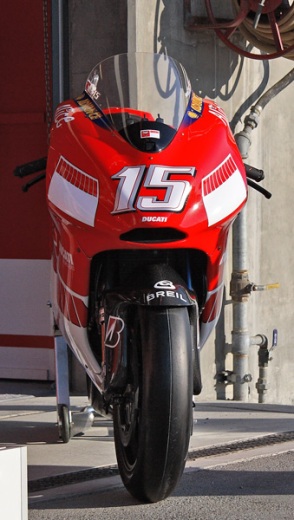 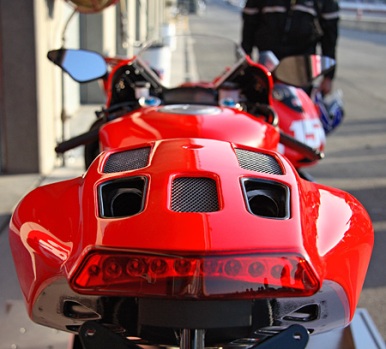 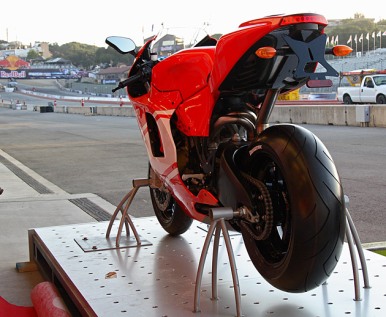