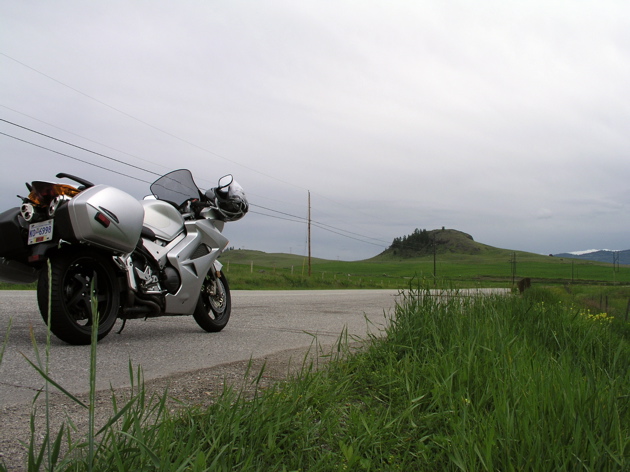 Tendrils of golden “Dirty Laundry” Gwurtzraminer trail down the glass’s interior.  The taste, even to my limited palette, is fruity, clean, and lingering.  Looking up at the wine board in the Toasted Oak Wine Bar and Grill it advertises Wine Flight Wednesday. I deliberate over the cost of staying at the Cactus Tree Inn, a short flip-flopped walk to this eatery, another two days.  Oliver, B.C., the host town of Sportbike West, may have offered me a dubious introduction this stay, but I’ve been won over.

Rolling into Oliver, some 390kms after an afternoon departure from Vancouver, I’m on a mission to scout out some of the best eat, drink and rest to be offered by the town in advance of SportBike West.  Despite the impending rains I aim for the aptly named Lakeside Resort.  Having stayed here once before I found the shore-side rooms were clean, comfortable, offered a nice view of the lake, and today apparently full.  The matronly clerk looks me in the eye and explains, “It’s golf season.  We’re all booked up.”

I’m dubious, it’s 6:00 in the evening, the hotel seeker’s frenzied prime time, but in this parking lot you can hear the crickets warming up for later in the evening – it is the sound of a soft starting tourist season.  Clad in Alpinestar leathers, which look to have been through an insect snowstorm, in the clerk’s eyes I’m as alien as a Power Ranger who’s been on the receiving end of a villain with particularly nasty discharge issues – in short I don’t meet with the clerk’s image of “nice folk”.

I ask for a recommendation and she suggests the Southwind, “They have a bar and a beer and wine store.”  It is a point she re-iterates several times.

It may have been well meaning discrimination aimed to place me with “my people”, but the Southwinds has no place in my world, beyond playing host to Sportbike West.  I check into the room without recognizance, and become a victim of my “frugal” nature.  That the price dropped $25.00 the moment I turned towards the door to check other hotels.  This is not a good sign, but I was raised to be polite and am too cheap for my own good to turn such a bargain down, such a tactic is near irresistible to me.

The basement room offers a eye level view of the parking lot, the bed is canted at an angle that screams chiropractor, the linoleum is worn and torn, and chairs featuring vinyl scar tissue composed of strings of cigarette burns.  The smell of mold, old cigarette smoke, and possibly tawdry elderly sex permeates.  I have stayed in worse, most notably a hooker hotel in Vegas where the next morning revealed the room next-door was quiet because it was condemned.  This trip I want decidedly better.

I’m not devious by nature but taking a more truthful approach I’d likely inadvertently say something insulting.  I decide to wing it on returning to the front desk.

“I just got a call, I need to return to Vancouver.”  The woman behind the desk looks at me, and I look stricken as if my mother had met with a terrible fate.  Strangely, envisioning a night in the hotel room below my feet appearing stricken is not a challenge.  Actors they say draw from within and once having been an extra on Sliders it seems I’d taken notes unconsciously.  Still, who knew the black pit gave refunds so easily?

A crisp clean room at the Cactus Tree Inn was a panacea for my mild guilt.  The rest I worked off in penance at the Inn’s fitness center, which also serves as the local gym.  Surrounded by the mahogany armed I push through my post ride stupor while pushing quality iron on an assortment of machines. The Cactus Tree provides wireless internet gratis and is a flip-flop shod saunter from town and I’ve a new favourite hotel in the Oliver.

Dinner arrives, who knew that bison and coconut milk could co-habituate so successfully in a pasta based dish?  The waitress has suggested that I pair the dish with a Golden Mile Cabernet Sauvignon, the guidance ensures her placement in the knowledgeable category of wait staff in my mind.  The meal is hearty, even after a day on the road and I’m forced to turn down local strawberries and chocolate for dessert.

Making my way home, the spring skies shed warm mist – it’s light and refreshing and contributes to the afterglow of the evening’s wines.  My evening here in Oliver may have started with a sour taste, but it’s ended on the high notes a sommelier of the road can recommend.