Second gear coming out of the corner and I hit the throttle; the motor torques past 7000RPM and needle and front wheel go skyward.  That comes as a shock.  The front end comes down and we’re off with a rotty twin-meets-diesel growl like no other license-pummeling, tire immolating sportbike.  To coin a phrase, this is not your father’s BMW, not even close.  This is the new 2006 BMW R1200S, the Bavarian manufacturer’s most focused, purposeful offering, and while the Beemer purist may whine like servo-activated braking that the R1200S has lost its tour-able roots, the rest of us will be having a great torque laden giggle.

Under the florescent glare of the Toronto show lights back in January, the looks of the all-black R1200S were an uninspiring collection of flat slabs and vague curves, as if the designers of the Chevy Avalanche and Pontiac Aztec decided to design a sportbike for BMW.  Complete with a dubious stacked tailpipe reminiscent of a female cat in heat.  Regardless of prejudices from previous viewings, sitting here in the evening light the R1200S, resplendent in red and silver, is a different story.  The can has still got to go, but if you listen closely you can hear the after market providers sharpening their pencils.  Meanwhile you can revel in the rest of the design; the R1200S’s upper bodywork is a delicate svelte icing, coating the solid heavy engine and it’s all held together by the trelliswork of the frame. Looking at it there is no mistaking that this is a R-type beemer, complete with protruding hexagonal cylinder heads, but from appearance alone there is also no question this is a sportbike. 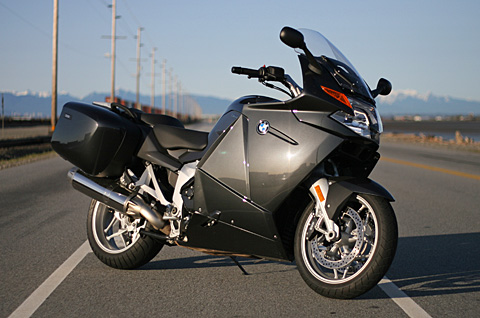 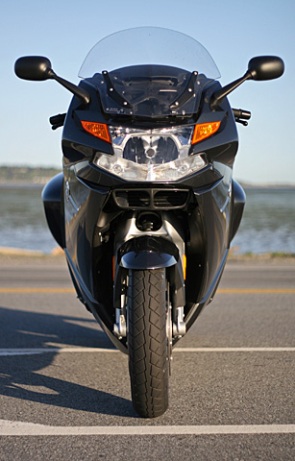 Poke the starter button and the R1200S kicks to the right, shaking itself awake with the hallmark BMW rattle.  This 1170cc horizontally opposed air-cooled twin may not sit whirring quietly at idle, but it has other more interesting attributes that become apparent on the road.  The relatively flat torque curve peaks at 83 lb-ft at 6800RPM, with the engine spinning onwards to 8,800 rpm; top power is poured out at 122hp at 8,250 rpm (claimed).  Those numbers read like a veneer of respectability, but dear gawd this animal feels good as it attempts to bring its snout up for a look at the heavens.  Second and third are good for this kind of fun and suddenly it’s clear why BMW has added a steering damper to the R1200S mix.  It’s not to settle the bike in the corners; it’s to calm the front tire’s landings.

Out in the corners what felt like soft suspension at the initial get on proves pliant and road gripping.  The front telelever has been stiffened, lightened and its pivot point appears to have been moved back.  Out back the paralever too has been lightened and in the evening sun I catch the golden glimpse of an Ohlins shock.  Those suspension changes have, in conjunction with a severe weight loss program, bringing the R1200S down 13kgs from the R1100S to a 195kg dry weight, have worked handling magic.  Changing lines mid-corner is the norm, and the R1200S has become flickable in a way its progenitor could never dream.  The turn in still requires more effort than other sportbikes, but then most of the GSX-R and ZX set are flightier fare on the roads while the R1200S feels solidly planted over ruts and wallows.  I see the line, aim and am though it before the though process is complete.

There are other hints of this R1200S having been distilled to sportbike purity.  Enthusiasts of aggressive riding can rejoice as the R1200S sheds the integral (linked) braking and power-assist servos.  Strangely, the loss of this technology is the rider’s gain.  Right off there is the obvious weight loss associated with the lack of electronics and plumbing the EVO system requires.  Then there’s the feel; it’s natural and progressive rather the than the binary hard-on, hard-off the servo system tended to produce.  Nor does pulling the R1200S down from speed suffer from the loss of the whining binders either, though you may now have to use two fingers on the lever instead of one, with twin four pot calipers biting down on 320mm disks up front.

Balancing out the road going deceleration equation is the aggressively set ABS; it seems harder to engage than on other beemers, allowing for harder braking before the system kicks in.  When the ABS does do its duty though, the system seems smoother than previous BMW Systems.  For those who want to take the R1200S out of the real world and to the track, the ABS can even be disabled – a trick the R1200S has stolen from its big-traily sibling the GS.

Despite all its sporting aspirations, the R1200S is still a BMW and its ergos are aggressive yet still comfortable.  Even for my 6’2” frame the legroom proved adequate without the cramping provided by other less road oriented sportbikes on the market.  Weight is still placed firmly on your wrists, and the airflow is designed to support your upper body even at moderate speeds.  From the seat the gauges are clear and easy to read, and the mirrors even work without craning and straining.  The comfort of the R1200S is such that I could almost see defiling the R1200S’s sporting principles and taking it on tour.  Mind you if you’ve a pillion their whining would likely replace that of those missing EVO braking servos; the passenger accommodations are abusive by BMW standards.  Given the other bikes in the BMW stable the R1200S wouldn’t be my first choice for such duty… it might however be the most fun.

Railing around the corners I find 4th gear bliss with this boxer engine providing plenty of compression braking into the corners and the torque to slingshot outwards.  It’s a lazy man’s tactic, but it saves me shifting through the well-chosen ratios.  That’s fine by me; clutchless upshifting provides a disquieting launch forward.  The 6-speed gearbox itself is still not as slick as other sport offerings, but it’s not the tectonic shifting of continental plates crashing together of previous BMW transmissions.  Still, in comparison to Suzuki’s psychic GSX-R box, which could be an industry standard, the German mark’s offering has a ways to go.  The entire experience is connected, despite the telelever’s vague feedback, by the sense of the engine and I’m grinning like an idiot.  That’s ok, because I’m acting like one also.

BMW has captured something in this new R1200S, in purifying its take on the sportbike formula and throwing out some of the practicalities the folks from the blue and white roundel have engineered something, dare we day it, fun!  The last time I felt like this, I was at the track on a Ducati 999.  The notion that I could scrape a cylinder head scampers through my mind, the bike has a ways to lean yet for that sort of behavior but the possibility is there.  That will wait for another test, for today I’m content to slingshot out of the corner and into the straight.  The boxer bellows out song below me and the clock climbs upwards rapidly… 220, 225, 230… This is not your fatherland’s beemer; this has been built for the rest of us.