The 2006 Suzuki GSX-R 600’s engine howls like a horde of banshees in the throws of heat as we blow by the parked “unmarked” police cruiser.  I’m pushing my luck this third time past the same dark blue sedan.  The first two times I made a pretense of being legal, but both the cop and I knew the real deal.  In a scheduling event that would puzzle the MENSA set, construction has closed off the road 13kms to the south of Porteau Cove and then another 10kms to the north intermittently.  The result is one of the best stretches of Sea-To-Sky offered up as a private highway to the GSX-R 600 and me.  Suzuki’s marketing materials may state “Own the Racetrack” but this morning the newest Gixxer 600 and I own something better…  We own the highway.

Wailing into the next corner I scrub off speed, plummeting through the ratios from 3rd to 1st, attempting to upset the GSX-R 600.  The slipper clutch eats my antics up without upset, rear-end chatter, or loss of control.  Suddenly rev matching on the downshift has become a courtesy extended by the bike rather than a mandatory act of riding.  If dropping gears is an effortless marvel, then spiraling up through them is sublime.  The slightest touch to the lever changes gears and clutchless up-shifts become commonplace, all of this reflected in the dash’s new gear indicator for good measure. 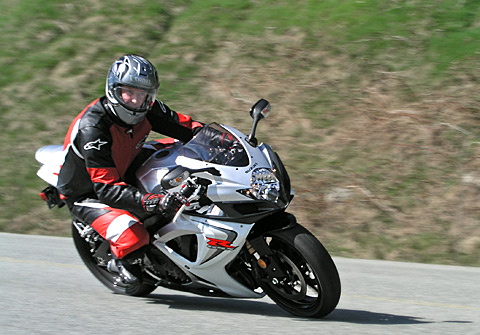 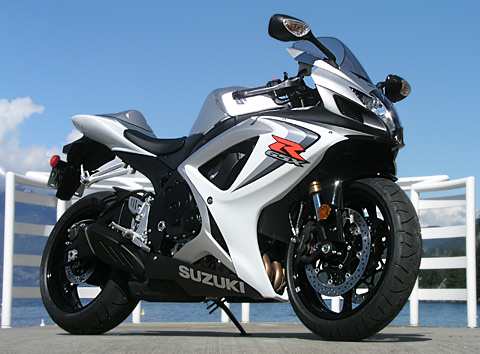 I quickly press on the aggressively placed clip-ons, weight the peg, and the GSX-R flicks into the turn proper with astonishing agility.  A claimed dry weight of a wispy 160kg has something to with this needle threading nimbleness, but where the weight is placed even more so.  Mass centralization is not some new Catholic authoritarian scheme, but a new engineering religion, and low-mounted exhaust is its new commandment.  Placing the weight down low to the road means that weight has to travel less from side to side in a transition, making the entire bike more “flickable”.  With the stubby trapezoidal pipe sitting below the right foot-peg and the catalytic converter and muffler in the belly of the beast, this mandatory lump of lead is about as low as it can get.

Easier to overlook is the engine, which loses 20mm in height, 54mm in length and 16mm in width.  This dimensional jiggery-pokery, the partial result of a stacked gearbox, moves the engine forward and its mass lower in the bike.  All that would shorten the wheelbase of the GSX-R 600, except the swingarm has been lengthened by 38mm, the pivot diameter by 3mm and the rear suspension link redesigned, keeping the total wheelbase of the bike 1400mm, the same as last year’s model.

In the world of “shorter wheelbase, faster turn-in” this seems nonsensical but Suzuki, despite the “own the track” marketing, are no fools.  Most GSX-R 600s will never see their tacky Bridgestone BT-014s touch a closed course.  The longer, stiffer and downright sculptural beauty of a swing arm with its pivot moved forward improves stability and decreases weight transfer.  Translation; whacking the throttle and hitting the shifts at an optimal 14,500 RPM, the Gixxer 600 takes off like a scalded cat, claws digging into the asphalt for traction in a mania of momentum-defying acceleration and flicking direction changes.

One set of those claws is the superb and compliant suspension, which even on stock settings provides awesome road holding capabilities.  For those with the time and the tools (the rear pre-load adjuster was not included in the toolkit) the array of adjustments matches those of the highest-end offerings from other brands.  Up front the inverted Showa 41mm forks are adjustable for preload, compression damping and rebound damping, as is the 46mm rear shock – so be prepared to spend some quality time at a suspension clinic.  Regardless of what BC’s roads throw at the GSX-R 600, the bike remains dedicated to those hallowed sport tenets of acceleration and lean without fail; you could call it “poised”, but this comes off a bit conservative, sort of like calling Eminem an “interesting” lyricist.

Slamming open the throttle in a straight turns me into a ten-year old.  The tach swivels skyward and speed is as instant as adding vinegar to baking soda with the revs frothing over explosively. The 599cc engine whips upward to a frenzied 16,500 RPM redline, providing gratification, pure entertainment and a special feeling in the pants (that may be the vibrations).  Technically, for those who don’t get caught up in such things, this doesn’t have to be done.  Below 6000RPM life is mellow and the exhaust-note is a throaty rasp, as if this was a 600 born to party drinking Jack and smoking cigarettes from a tender age.  Past that threshold and it’s game on, the Gixxer 600’s maximum 50ft-lbs of torque shoves in at 7000RPM, with peak 124 (claimed) shaft horsepower striking at 13,500 RPM.  In spite of those figures this still is a 600 and it spins up effervescently and addictively, making it hard to keep a good tach needle down.  Feeding that compulsion is a soundtrack that beats common sense into something resembling a smashed bag of canaries.

The exhaust’s throaty howl issues demonically from under your right heal.  It’s as if the engineers from Suzuki sat down with some biologist friends one night and asked if there is a tone that invokes primal fear and the fight-or-flight reflex, inciting overwrought adrenaline production.  The resulting exhaust note is an unholy cacophony that reverberates in the bell of your helmet, hammering your adrenal gland and eardrums mercilessly.  Spring has a new herald in the GSX-R 600, but that’s because the sonic shockwave from the exhaust has caused Robin Redbreast to drop out of the sky dead as a brick.  Earplugs then are non-optional equipment even on short hops.

Using the binders is not so extreme but is the expected single fingered affair.  Up front, four-pot radial calipers mash down on twin 310mm disks with the consistency and predictability of the sun rising.  Out back, a 220mm disk coupled with a single pistoned caliper handles deceleration duties handily.  While the rest of the GSX-R 600 surprises, the braking performs without muss, quietly getting on with the job of catapulting you forward in your seat and into the tank.  Grab a handful and panic stops from 180kph are handled without incident (though the rear brake does seem easily locked), with the bike shedding speed faster than two virgins shucking clothes in an hourly motel room. Useful, especially if you’ve just spotted one of the local boys in blue just past the next riser.

Once pulled over you can potentially distract the local constabulary with the GSX-R 600’s design, likely they’ve seen more than a few of the last generation and were not taken with its slab sided design.  You know, the one that looked like it had been on the losing end of an argument with a T-square and a protractor.  The 2006 Gixxer’s looks is sleek with the front narrower by 5%, making for better aerodynamics and a slimmer look.  From the side you can spot styling cues such as the tank/airbox design and arching lines playing through the side fairings lifted from lookers like the Yamaha R1.  Even the design illiterate can spot the continuation of the trapezoid theme first seen in last year’s GSX-R 1000, the exhaust and radiator also use this geometric form which results in styling that follows function.  The radiator, for example, gains surface area using this shape, and that means increased cooling, allowing the engineers to push the engine for more power.

Other details abound, showing Suzuki know their Gen-Y crowd.  The stock rims are skeletal trispokes, the thinnest and for that reason the trickest I’ve seen.  The undertail manufacturers will be moaning as the bike comes with a nice one stock.  The rear LED signals and clear lenses integrated into the tail section will be killing another aftermarket cottage industry. While up front the vertically stacked headlight not only shreds the darkness, but gives the bike predatory looks.  Then there is the front turn signals integrated into the usable mirrors (usable mirrors on a 600, who’d have thought), this letting the older amongst us remember the Blackbird and convince ourselves this isn’t so different in a cross market play.

From the seat the ergonomics are more comfortable than the raptor-like looks would imply.  The fuel tank is shorter, moving you forward and putting the bars in easy reach.  Augmenting this more compact seating position, which makes the rider part of the mass centralization equation, are footrests adjustable to three positions over a 14mm range.  For this test we only had the GSX-R 600 for two days and approximately 700kms, but the riding position treated even my 6”2’ frame well despite my dwarfing the bike.  At 5’10” however, the Gixxer 600 fit photographer Kevin bang on.

There were a couple very minor irritants that cropped up in our time with the GSX-R 600.  Close inspection saw the black frame’s coating rubbing off on my leathers after repeated runs through the same series of corners for the photo shoot.  The gauges were exceptionally readable, but the buttons to operate them for functions such as switching through the reserve trip counter (we’re pleased to confirm you can go 48.6kms at minimum after the light comes flashing to life) are hard to reach and operate while gloved on the road.  Also, those in the size-12 foot set may find their heel rubbing the paint on the swing arm and more occasionally the exhaust heat shield.  Do those minor issues get in the way of enjoying this bike?  I’ve no idea, I was too busy giggling like a 10-year old.

It’s the first day of our test with the GSX-R 600 and I’ve just hit 245kph; the bike may have more but I’m the limiting aerodynamic factor. Shifting an elbow reveals a 2004 R1 sitting in my rear-views, and it’s losing ground with the next sweeper coming up fast.  The 600’s engine is howling, the wind streams by, the chassis is talking to me, the feedback is like shot-gunning a can of red bull.  Suddenly I realize why I like the GSX-R 600 so much; we’re moving fast and it feels like it.