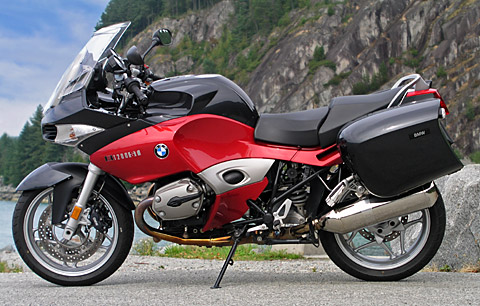 By reason of looks alone, BMW’s R1200ST is utterly memorable. In a world of Back-Street-Boy-sportbikes clamoring to all look alike, the R1200ST’s looks are challenging. OWD uses this phrase for lack of anything stronger. The design disrupts the notion of tourer, sport-tourer and sport all in one go. The side profile is strong, the rearview clean and the front view… The front view…

The front looks like a futuristic and alien interpretation of a mechanical baleen whale that has washed up on the beach. Complete with a front grill that just screams “Krill, feed me krill!” Take a second though, and remember, how radical the 999 looked when you first saw it, or the V-TEC VFR? Perhaps this design will age with grace as our eyes grow accustom. Strangely though, there is a bigger challenge facing the “ugly duckling” of the BMW flock, a near “Andersenian” crisis of identity. The thing to remember, though, is that duckling has resisted the tests of character brought on by his looks, until his inevitable transformation into something more – simply by finding his place.

The R1200ST genetically stands on the shoulders of a giant, its sibling the R1200RT, sharing much of the same running gear. It’s driven by the same engine as the R1200RT and has the same chassis. One cannot help but draw comparisons to the RT, and it’s almost as if BMW’s design team saw this coming; one can almost hear them musing, “We must make it really different. We must ensure that this bike is not just an RT without the party gown fairing.” That attitude has lead the ST’s design team somewhere in the heart of Bavaria, to overshoot the mark and as a result the, and that may be the case with the R1200ST.

The R1200ST’s swing-arm is an inch longer than its sibling RT’s, which may pay dividends in the high-speed sweepers, but slows down handling in the tight bits. The suspension is softer than the RT’s. And the ST carries less fairing, lightening it to a claimed dry weight less than that of the VFR. This mixture, however, leaves one utterly confused as to where the ST fits in the BMW family or the pantheon of sport-touring offerings. So rather than compare it to siblings, half-brothers and cousins the R1200ST confounds classification.

The R1200ST is not an unpleasant bike, but it’s just not epic. Fire it up and you’re reassured by the engine note, a gentle “ferting” sound, that there is no barnstorming experience looming on the horizon, but something more civilized and restrained. Complementing that sense is the R1200ST’s softly sprung suspension, which doesn’t fit with the ST designation for sport-tourer; more aggressive riders will likely be going for the likes of the VFR, FJR, Sprint ST, or Ducati ST3 for something more visceral.

At speed, the soft suspension makes things challenging. Tight hairpins? Like a beluga jumping through a hoola-hoop, it takes a lot of encouragement; it is a tight fit, but it can be done. The task is best approached with smooth throttle control and consistent acceleration through the corner then driving out hard to keep the soft, non-adjustable front end from dipping or feeling vaguely upset by coming off the throttle. By comparison, Honda’s VFR 800 ABS or Ducati’s ST3 feel like scalpels through the tight twists.

The R1200ST seems better suited to other more relaxed fare such as sweeping corners and looser undulations than it is to hairpins. Here, with a bit of pre-corner setup, it’s easy to double pace on 50 and 60kph marked turns. Through it all the ST is reassuringly planted and seems endowed with cetacean tranquility.

The ergos are upright, comfortable, and remarkably adjustable in comparison to the capital “ess” Sport-tourer flock. The bars are adjustable through 25mm of range by repositioning the clamps on the fork tubes, and in the stock position give you a slight forward cant. This makes the ST feel a bit sporting, but not so aggressive that your wrists are pleading for carpal-tunnel mercy. The seat is comfortable, supportive and easily adjustable between two heights, 810mm or 830mm (31.9/32.7in). This is a simple procedure that involves reversing two rubber mounts beneath the forward seat. The pegs are a bit further back and higher than on the RT or other tourers, but not as aggressive or tight as a VFR, making for a good peg-scrape free middle ground of a loose bend to the knees. In the taller setting there is ample legroom for those of us not the standard 5’10 height, used in Japanese motorcycle design. If going from the GSX-R1000 to the VFR leaves one feeling wrapped in a soft, comfortable, warm, fuzzy feeling, going from the VFR to the R1200ST is that feeling all over again plus some comfy slippers.

Wind protection for the average of height is good, however protection for the tall is not as comfortable. The blast coming over the dual-position windscreen is clean but ever present. There are two positions 20mm apart; the first directs the windblast directly into your shoulders, the second directly up into your helmet, or as we like to call them bad and wrong. The stream, to its benefit, is clean and buffet-free, at least edging it ahead of the V-Strom’s screen in effectiveness. Shorter folk as always will likely have better luck with the wind-protection. Surprisingly, your lower body feels well covered from the elements, with the cylinder heads offering as much defense from the elements as most lower fairings.

The engine itself is, of course, the latest of BMW boxers, and while smoother than previous generations it still plays a staccato percussion through the bars at higher RPMs. With 85ft-lb of torque at 6000 rpm, and 110 bhp (claimed) the plant offers a lot of pull right off the mark, and ample thrust for passing. The smoothest point in the range seems to sit at about 4000RPM, where the ST just sails along with oceanic calm. “Second star on the right and straight on till morning.” becomes a reasonable statement – especially given the spectacular illumination given by the stacked headlights. It urges you to whip out the Treo and have your personal assistant cancel all appointments for a couple weeks.

You could, of course, attempt to work from the road. One of the best things about any sport-tourer is the ability to take it all with you, and here the ST shines. Its luggage is shared with its bigger brother the RT and ensures your creature comforts can come with. The bags are capacious and will house a 17-inch Apple PowerBook with a slim sleeve. This may not impress some, but around our office we generally buy bikes based on their ability to house the tools of the trade… and two weeks worth of clothes.

Other points fail to excel on the R1200ST though. This implementations of BMW’s integral ABS braking offers a wooden and abrupt feel, with the ABS cutting in too early for my tastes.

In comparison to other bikes in the range such as the K1200R, it’s almost hard to believe the R1200ST comes from the same company. The suspension and front-end tele-lever offers little in the way of feel. You are taking it on of faith that the engineers from the fatherland got it right, but the good news is they did.

In complete defiance of the bike’s perceived size, at low speeds the R1200ST is remarkably easy to potter around parking lots and u-turn at walking speeds. Part of this is due to meticulous and exact throttle control, that offers no surprises but also little forgiveness. Imprecise on and off the throttle use results in jerking at low speeds. It’s best to be just as exacting as the fuel injection. You can feather the clutch, but that’s sort of like trying to “feather” a bench press, it’s on the heavy side, and once it warms up a bit of moaning might happen. The dry clutch is part of the BMW’s modern R heritage and character, and does offer the advantage of fewer oil changes than bikes having wet clutches sharing engine oil. On a bike as comfortable as the R1200ST, the heaviness seems almost out of place.

Despite all the comparisons to the flight of other sport-tourers on the market, the R1200ST doesn’t quite seem to fit the mold. It’s softer than the likes of the R1200RT, possibly being more on a par with the Honda ST1300 for ride quality. The wheelbase is longer than the RT. The seating position more aggressive than its sibling’s, and more relaxed than that of the VFR800ABS. So the real question is where does the BMW R1200ST fit?

OWD has a theory. What if the “ST” doesn’t mean Sport-Tourer? The R1200ST is an agreeable enigma, and with the looks having grown on us over time – though a swan it still is not. But the bike is sporting only in the way a velour-sweat suits and footballer bling is sporting. It’s comfortable, a bit stylish and you could sprint in it, but only if you really wanted to. The R1200ST is comfortable, offers a bit of protection, and is, unlike any velour based clothing, quite practical… Those are all hallmarks of another type of bike, something less focused even than a Sport Tourer… the venerable STandard. It’s in this context that the R1200ST may find a place in the BMW line-up.

Regardless of what the “ST” stands for, the R1200ST may be the subtlest gateway to the BMW line, something for those who want the stomp of a sport-tourer, with a bit of weather protection and a certain level-headedness, wrapped in a package more relaxed than a full-on sport-tourer. Think of R1200ST as a solid choice for commuting to and from work… or touring along the ocean side, consuming miles in a southern migration with leisurely comfort. Has the duckling found its place? Perhaps, or maybe it’s a new genus, a speciation event, as the diversity of motorcycles grows the line between ducks and swans begins to blur.

– Written by Neil Johnston with Photos By Kevin Miklossy