Nipping through the corners of the Autodrome St-Eustache, reminds me of how effectively wide naked bike bars can push a ride down into a corner.  The Hyosung GT650 complies promptly to such ministrations, making it an easier and quicker ride than the company’s fully faired offerings, which OWD sampled during our marathon track session.  The romp is set to the tune of a nicely rotty sounding engine note that offers a smooth throb that could pass for a twin larger than the 647cc plant.

Fueled by twin 39mm Mikuni carbs, with response feeling as good as fuel injection, the GT650’s power plant turns out a claimed 79hp at 9000 RPM.  That’s 5hp more than the Suzuki SV650’s claimed output to which the Hyosung derivative will always be compared.  Torque also gets a bit of a boost, up 6.9kg-m at 7600rpm to the Suzuki’s 6.5 kg-m at 7200rpm.

Burning off speed on the track’s tight inner field, I slip down a gear. The GT650 voices some complaint, backfiring on deceleration – the result of meeting emissions standards, easily remedied by a slight modification to the carbs (quick, to the Bat-Search-Engine Robin).  Counter-pointing the soundtrack is the gearbox’s feel; the action is light, velvety and precise. Coming into the sweeper I gear clutch-less’ly upwards, tall ratios give the GT650 a long legged feel and make good use of the engine’s torque.  This also leaves the GT feeling less rev-happy than the SV 650, resulting in a smoother feel. I note the soft rev-limiter nudging me gently to shift at 11,000 RPM.  Smooth and flexible seem the keywords of the day for the Hyosung engine, with it offering it’s best in the 5000-8000RPM range. 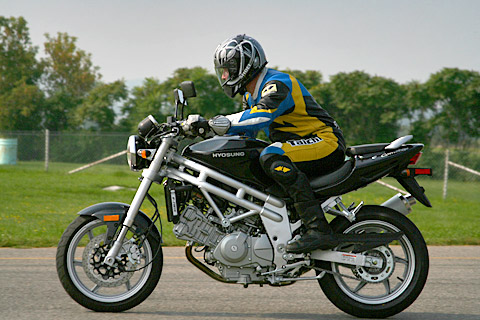 We pass the grandstands and power into the chicane, clocking past the press tent at 110kph.  National Motorsports, Hyosung’s Canadian distributor, has gone out of it’s way to slow the track down in an effort to keep overzealous press and dealers from wadding any of the Canadian preproduction bikes into their constituent components.

Interestingly, those components include fully-adjustable 41mm upside-down forks, offering 120mm of travel and good compliance. They soak-up the bumps well at the rougher distal end of the track, though softly sprung, they do suffer a bit of dive under braking.  The rear suspension feels a bit too soft, but we didn’t have the opportunity to play with the preload adjustment in an attempt to refine the ride.  While it proved suitable for what St-Eustache offers, we suspect that on rough roads it may be wanting for compliance.

The GT650 isn’t as quick to turn in as the flighty SV650 Naked; the suppler suspension is part of that maxim. That the GT650 weighs a claimed 180kg versus the SV650’s slight 165kg is another variable in the handling formula.  The steel frame may be the final factor as likely it carries a bit more flex than the Suzuki’s aluminum member.  Running through the equation, you may come out thinking less of the GT650 – don’t!  The result of a bit more mass and chassis flex is a planted feel through the corners and handling that comes out less twitchy and more user friendly to the new rider.

Driving though the sweeper, the bus stop, and into the hairpins, gives me a good chance to exercise the brakes.  The twin-pistoned fare is a bit wan in terms of stopping power as they bite down on the 300mm front disks.  It’s not crisp braking, but rather feels like the result of a collective effort from the components, building to a soft slowing culmination.  Dropping speed this way is like the climax of a Meryl Streep drama, in comparison to other more action oriented offerings.  The brakes work, they are effective, but you’ll need to be paying attention.

Through the inside field again, and I have a chance to realize some proper lean, flicking the bike through the tight serpentine.  The adjustable pegs are well up and away from the asphalt despite my best efforts.  The bike is proper twin narrow, and the seat, while comfortable, is easily hung-off of.  Though the test is short, this perch is preferable to the arse-aching cruelty of the ’05 SV 650 Naked, though with a height of 780mm (30.in) it proves tight seating for the tall among us.  We heel tight and low around the infield final turn.

As if by rote, the GT650’s rear tire slides across the paint line marking our sweeping entry into the front straight.  It is a move that has gone from exciting, to commonplace over the session, and serves as a gentle reminder of the Hyosung’s street-oriented rubber, BT-056’s.  They lead one to wonder what this bike really has in it.  Sporting some Pirelli Diablos and improved braking kit, the OWD staff would not hesitate to take the GT650 on as an economical track bike.

The allure of the GT650 is such that I’ve well over-run my allocated laps for the session – by about a half hour and an uncounted number of orbits.  Despite the aspirations of being “a beginners bike”, the GT650 is a hugely satisfying ride.  Finally I decide to relinquish my mount, a ball of sweat from heavy leathers, 31°C heat, and staggering humidity.  The final word on the Hyosung GT650 is not all the talk of a cheaper Suzuki, the two-year warrantee or versatile engine…  it’s not a word at all really…  it is the post ride grin I’m wearing.