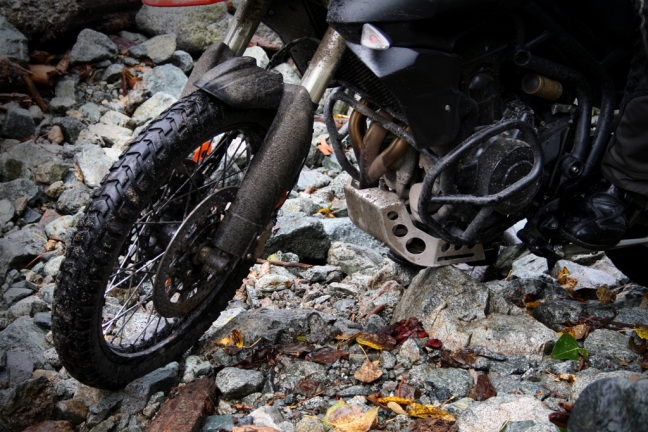 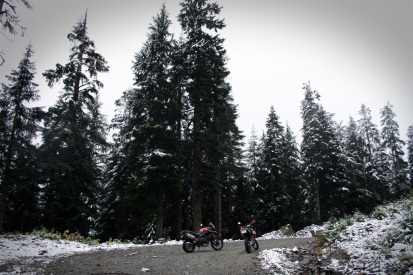 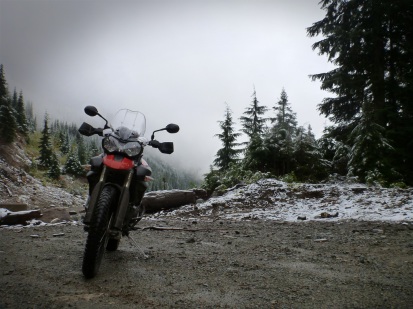 Forget what the Earth’s position around the sun says, judging by the encroachment of the snowline down the Vancouver’s North Shore Mountains, we’re facing the onset of winter on the West coast. That makes each ride a rarity, sparking in the firmament of suicidal-gray skies, a colour achieved in a tedium of dark and rainfall. The drizzle starts at Squamish, making the rocks slick under the Tiger 800 XC’s rear Heidenau K60. Shod in Pirelli MT-21s and significantly lighter, Bart’s KTM 690 Enduro R scampers ahead with the ride’s instigator astride.

“We could see if we can make it up to the snow line,” says the man not on a 215 kg/470 lb (wet) adventure bike. A tall engine, with a tank perched on top, leaves the Tiger 800 XC feeling top heavy compared to a BMW F800GS and massive in comparison to a KTM 690 Enduro R. If the Tiger slugs it out in the KTM’s company, then that’s a huge compliment to the Triumph’s capabilities.

The Heidenau K60 rear is an issue, it’s the old style with a solid central track in the tire’s tread. Combined with the power development of the Triumph’s inline-triple, the rear tends to spin with minimal effect. On the first steep uphill the tire travels significantly further than the bike, in a show of gravel spewing fun.

At a giant deadfall stump that had blocked our way only days before, we’re relieved to find the way partially cleared. Looking at the tracks, there’s been quad riders through past the giant dead fall. Not just any quad riders, as we discover later on Facebook, they are acquaintances and friends; two-hours ahead of us in a quirk of coincidence. For as much as backwoods users seem to be periodically at odds, access for bikes and even hikers attempting to reach trailheads, often comes down to quads clearing the way.

The route up to the summit isn’t entirely clear.

The landslide is a sluice of baby-head and larger rocks across the road, then grated in an approximation of the word “passable”. I’m thinking that, on a smaller bike, the obstacle wouldn’t be a huge deal. Then, ahead of me, Bart on his 2013 KTM 690 Enduro R takes a run at the rock garden and stalls a couple times before making it through. Considering the Triumph Tiger 800 XC’s mass, suddenly this seems like no small adventure.

“That didn’t inspire confidence,” I joke while scouting possible lines on foot.

“Did you tell Triumph where you were taking their bike?” We seldom bother companies with the specific details of testing, generally the itineraries develop to match a loaner bike’s capabilities.

As I crunch down on the bashplate, high centering the Tiger on a jagged immovable rock, I’m thinking that I may have overestimated my ride acumen. Surely though, our reputation proceeds us; the bike came with both a bashplate and engine guards.

Triumph, you may consider both optional add-ons tested and in the case of the bashplate passed.

It’s touch and go, foot down and hop, as I roll the big cat back, leaving a track of aluminum residue on the rock, before getting a run at a slightly cleaner line. Uphill through the slide, gravity is fighting me and the Tiger 800 XC’s charming propensity to spin out is keeping things entertaining.

We’re through and that’s left me impressed with the Tiger. Two weeks ago, during our first dirt outing I wasn’t. The 800 XC seemed top heavy, prone to spinning out, unwieldy, but I’m learning to work with the bike’s weight and handling characteristics. And, most rewardingly, remembering to gun the gas for turns, bringing the rear end around in an occasional pastiche of flat-track style.

We charge upwards and onwards; the weather and a season of general abuse has left my visor scratched, hazed and fogging — so overall useless. I’m riding with it open, the precipitation has transitioned from drizzle to ice to sleet, stinging my eyes. The onslaught of wind at 40kph down the decommissioned road, is burning my cheeks. The joy of off-road riding though, is one is seldom truly cold. There is enough physical exertion involved in riding to keep you warm.

We reach the summit and stop for photos in the nascent season of snow, before riding on further towards a barrier created to keep vehicles from going into the Indian Arm watershed. The snow is sticking now, the ground covered with an inch of wet and white. Sure you want to avoid the broader and flatter rocks, which, covered in precipitate, are slick enough that the rear and front end tend to slide out. Though, thankfully, not both at once, and not unrecoverable. Here the Tiger reveals its deportment and balance.

We stop to evaluate the barrier. On a smaller bike, it’s passable. On the Tiger 800 XC, in the increasing snow, it might be a one-way trip. A down, but not back up sort of ride. Perhaps, too much of an adventure then.

Backtracking, we take postcard winter photos at a small pond before beating a retreat to Squamish for coffee. Again the KTM 690 Enduro R and Bart, scamper ahead. The Triumph Tiger 800 XC, plows on through the slush at a more conservative pace, it is after all no small adventure, but, then, in a strange way neither was the day’s ride. In relatively small gain of elevation, we’ve crossed seasons and a threshold from the Tiger being merely an adventure bike to being one that’s capable of more than I expected of it – no small achievement over the course of “Snow Small Adventure”.