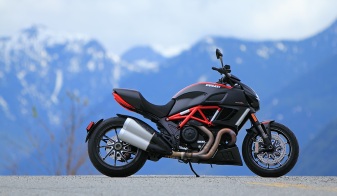 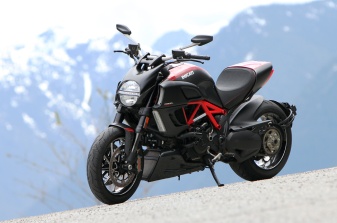 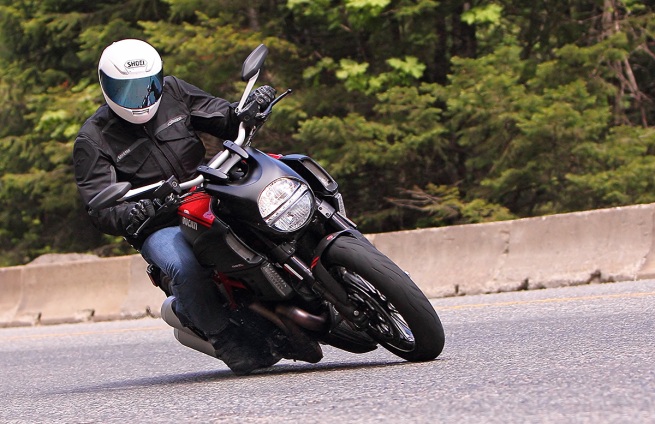 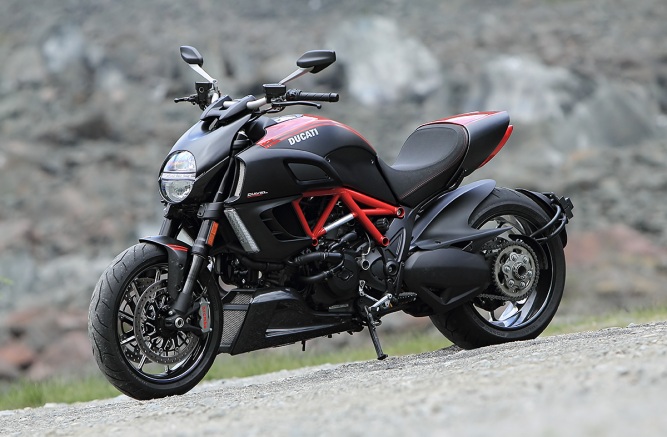 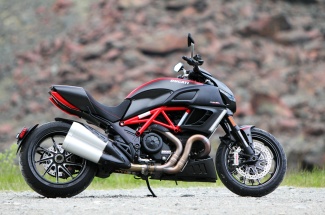 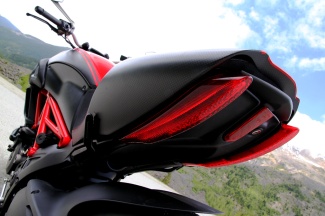 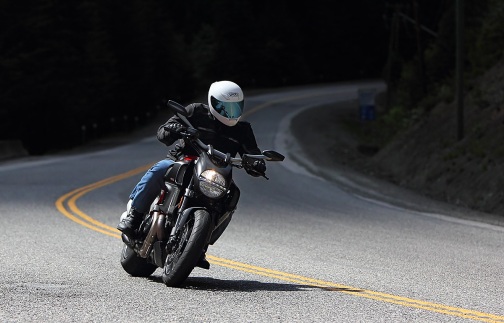 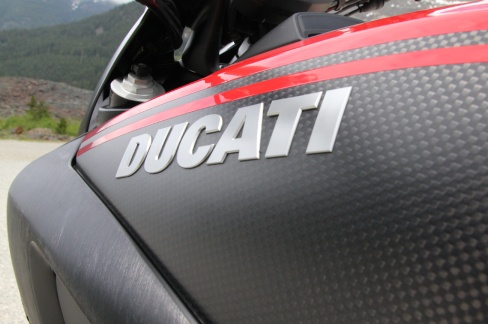 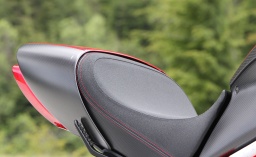 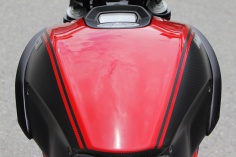 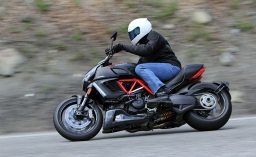 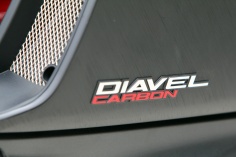 The Ducati Diavel has stormed through the curves and canyons of the Crow’s Nest Highway between Princeton and Hope, until I’ve caught a seven Harley procession riding in staggered formation… again. The Diavel and I have used them to “play the gap”; pulling over and waiting for unbelievably slow traffic, then closing the gap at pace. As an experiment I cruise with the group for a time — nearly minutes. An opening in traffic and the Diavel launches past in a gale of carbon fiber violence. I’m unsure of the Diavel’s taxonomy, but this is clear; it is not a cruiser.

I’ll admit, I’m eating a bit of crow here; I attempted to squirm out of testing the Diavel. Looking at it, I simply thought it wasn’t true to the Ducati brand. I was suckered by the presentation, its packaging and its apparent departure from Ducati’s sport ethos.

It starts with huge veins of swagger, mined from the core of the Italian psyche, and sculpted into motorcycle form. From the side you catch deco stream-liner cues. From the front you’re confronted with a retro-futuristic face. From the seat, there’s a vast muscle car hood of carbon fiber thrusting towards the horizon like a large protrusion looming from your trouser area. Suddenly your displacement is an uncomfortably Freudian 1198.4cc, round up to 1200 if you’re bragging. Behind you there’s nothing; a bobbed off tail end with fold out pegs and a torture perch for a passenger you hate.

The owner’s manual should come with “Visual Statement” section, warning that each stop will be extended by 45 minutes due to people wanting to talk about your bike. Fly-paper for 20-55 males the consensus is “crazy cool”, “strangely sexy” and “badass”. The Diavel mixes cruiser, chopper and bobber seemingly in a play for the infinitesimally small muscle bike market of which a geeky motorcycle writer isn’t part of.

Now though, I’m just squirming my right foot, trying to keep from dragging through yet another corner and as I torque rubber dust into the faces of the road’s weaker denizens. The Diavel completely devastates muscle bike expectations. Or, is that expectations period?

According to Ducati the Diavel has a 0-100km (62mph) time of 2.6 seconds, faster than the company’ lightening-painted-red 1198 superbike. Pull the throttle wide open and it will take a couple of minutes to realize the person muttering swearwords in your helmet is you coming out of shock.

Since we’re talking the embodiment of manhood in the muscle segment, also known as numbers, consider the “competition”. The Diavel makes 162hp and 94lb-ft of torque, while Yamaha’s V-Max makes 197hp and 104.2 lb-ft, but weighs 100kgs more than the 207kg (dry) Ducati. The V-Max also goes around corners like a wet noodle, comparatively. Meanwhile anything from Harley, even the good ones with “rod” in the name, are left struggling under the weight of heavy branding, complex alphabet soup badging.

The Diavel also has the shortest braking distance of any production Ducati made… Ever. At least until the ABS kicks in. A fun fact that entertains Ducatista and turns you into a bore at dinner parties.

With the 320mm and 4-piston radially mounted Monobloc calipers, Brembo hasn’t supplied brakes, they’ve supplied God-stoppers. Not just the sudden deceleration sort, these are instruments of finesse, capable of subtly shaving speed, or killing it outright. Scrub off a little inertia into the corners, or hit a wall in an ABS-chattering stop with a two fingered pull.

The Diavel, Bolognese slang for devil if you’ve somehow managed to escape Ducati’s marketing materials, is wicked fast. Despite the power being infinitely usable, starting at a basement of 2000RPM, the Diavel begs for the throttle. Mainly so the unblocked wind blast can pez-dispenser your helmet off your head, and deafen you with the engine note of a pissed-off underworld god unleashing a quake. Unrelenting, there is no drop-off or weakness in the rev range.

The experience isn’t limited to you. In the distance, at full throttle, the Diavel sounds like a helicopter gunship on a strafing run of speed limit signs. I suggest finding tunnels to watch traffic scatter. Repeatedly.

Cracking the Diavel open and unleashing the engine’s fire and brimstone is a temptation the Pope couldn’t resist. On speed alone, the Diavel could stand as a muscle bike. With only the noise, drama and charisma it would be desirable. But, to be a Ducati it needs to handle too.

U-turning at low speeds for photos, the Diavel demonstrates balanced and natural handling, with only a moderate amount of push back through the bars incurred by the leverage of the 28-degree fork rake. As a kicker, the fueling at low speed is better than the Diavel’s engine donor Multistrada. Wick it up, substantially, and you might expect the massive 240-section Pirelli Diablo Rosso II gum-ball rear tire, mounted on a Marchesini 9-spoke chromed rim, to slow handling.

Not on your life.

The handling is more deliberate and less incisive than a superbike, but the Diavel is very neutral feeling, changing directions with stability and grace. Like the Devil through a loophole, the elegant hewing of turns lets you refine lines as new obstacles come up. Yes, bring on our multi-apex photo corner, or better a steady day-long stream of them. That the Diavel is astonishingly easy to ride leads to the inevitable inappropriate behavior. Not just for a cruiser, but for an outright sport bike — just ask the Triumph Speed Triple rider who tried to catch photographer Kevin.

You never, not for a moment, forget the Diavel is utterly ferocious firing out the apex on a wave of tire melting torque. Of the three throttle maps, urban, touring and sport, our preference is the last, which could also be labeled, “extended heart attack of acceleration, while an acreage of rear tire provides traction at insensible lean angles.”

The only weakness in the handling formula is the Diavel doesn’t manage mid-corner wallows well. The firm short travel suspension can cause the bike to buck a bit. Until you add gas, which seems the Diavel solution to everything.

From a fuel consumption perspective the Diavel is corrupting. Our efforts upped the average consumption to 7.8L/100KM (30MPG). To burn through the 17 litre tank faster you’d need a blow-torch, which wouldn’t be near as fun. While there’s an idiot light on the dash that lights with 2 litres left, the lack of a fuel gauge on the bar-mounted LCD gauges or on the second full-colour tank-top display is a critical flaw.

Then there’s the ergonomics.

At 6’2” to emulate the seating position, go into the fetal position with your arms outstretched in front of you. With a low 770mm (30.3in) seat height, make sure your legs are nicely cramped. Now balance on your tailbone on a bar stool. Finally, hold this position, unprotected in a 220kph gale force wind. Kevin, at 5’10” found the Diavel more comfortable, with the curved seat keeping you from sliding off under heavy acceleration. The low seat height too, is much kinder to those short on inseam.

The ergonomics though are true to the Ducati brand experience. There is still no place for size 12 right foot to seat properly on a peg. The seating position feels like the 1198’s, but simply rotated upright so there’s no weight on your wrists. It’s as familiar as the unalloyed joy of listening to the 90-degree L-Twin spool up and deploy 162hp to the rear wheel through the slick and precise six-speed manual.

If there’s one thing the Diavel isn’t adept at, it’s cruising. At speed limit, even in urban mode, it strains underneath you like a pitbull in a bag. In traffic, that smell is your inner-calf slowcooking on the header pipes. On rough road, the ride is jiggly, the suspension harsh and the seating position conveys each road imperfection directly to the base of your spine. You, may be surprised to note in the cornering shots that the Diavel has rear suspension. Worse for the cruiser demographic, there’s no realistic way of adding a living-room window size screen, ineffective leather saddle bags or streamers of tassels without looking like a dork. Though these staggering impracticalities may be brand insurance on Ducati’s part.

The crowning achievement to the Diavel is that riding it makes you feel like a total badass. Quite a feat considering Clark Kent would consider me “a bit uncool”. More importantly as you rumble through town, the exhaust snapping and cracking threats at traffic, you know it’s not a ruse. The Diavel, named after the Father of Lies, speaks its true nature.

Other’s have dissected the Ducati Diavel’s “market position” endlessly; is it a cruiser, muscle bike, naked? A “cruiser missile” targeting in-the-box motorcycling pre-conception? When a bike is as free-basingly fun and as outright badass as the Ducati Diavel; who f**king cares?

The Diavel is raucous edgy Sundays of illegality and mad blasts, that make your skin tingle and raw nerves sing. And, if you happen to pass by a church, crack the throttle. The pews should know the Devil has come to town.