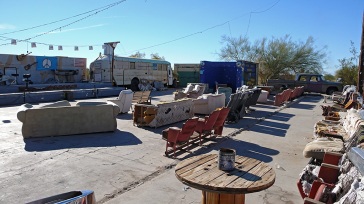 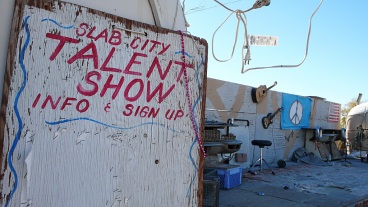 BMW R1200GS at Night
Slab City, “turn on, tune in, drop out”, this is a place to get at least one of those right. The two dreaded white man-children at the table in the Oasis Club, the city’s social club, certainly have, though it’s probably not turn on or tune in.

“We’re supposed to serve lunch,” says the one with the mirrored tattoos of scorpions on his lower cheeks partially hidden under facial scruff, “but they didn’t leave the keys to the cupboard.” The lunch rush hasn’t apparently materialized, but a couple of bowls have. Likely these two, crudded with long term ground-in camping and desert grime, wouldn’t pass any local or foreign “Food Safe” standards.

“Yah, a friend of mine had a shotgun pulled on him last night. Make sure you announce yourself. I always call out, ‘knock, knock’.”

So, there are rules, but not many. Set your tent up where ever you find space; just don’t expect any of the “Slabs” to be open.

Slab City gains its appellation from the concrete slabs remaining from the flattened and abandoned WWII Marine Barracks Camp Dunlap. History has it that a group of Marines remained after the base closed, building a squatter’s encampment of their own on the slabs of concrete that remained after the base’s building were razed. The place has been inhabited by various tenants running from hippies in shanty-town shacks, octogenarians RVs and hermits with a social life the ever since, with around 150 permanent residents becoming a “Slab City”.

From the hearsay descriptions, we fueled up the bikes and prepare for an adventurous four mile ride in from Niland, California. The road in is rough heaved asphalt, but hardly an adventure. Unless you count popping the front end of GSA up off the occasional paved whoop.

Old furniture, campers, trailers, vans and busses, pop culture and derelicts wash up here, Slab City feels like life after culture. The tattered edge of American culture has pooled here, hippies, drop outs, off-gridders, vagabonders, and $160,000 RV driving Libertarians and snowbirds avoiding pad fees. While a good portion of Slab City has spent life shunning sybaritic indulgence, a second half have culminated their life’s work in an RV retirement plan, only to arrive at the same destination.

A few roads from the base remain, the rest are a web-work over 3-square miles of gravel well-packed from usage.

We skirt each enclave. The sun bleached derelicts of trailers, busses and trucks of long term residence, built up shanties, and the RVs that stand out incongruously white against the dust, scrap and junk-yard constructs. No electricity, no running water or services, most campers use generators or solar panels to generate electricity, this is life after the war, left over swords pounded into plowshares.

The Ducati’s low speed rattle seems entirely unfitting in the RV’s “Shady Acres”. Our tent would be incongruous and our presence could cause a dangerous and precipitous depressurization in the mean age. The next morning a herd of wrinkles and sags complete with tour group name tags and walking sticks are off to the hot-spring baths, offering the best argument for avoiding nude bathing we’ve encountered in a while.

Both the Ducati and the BMW are too brand conscious to hang out near the hippy “freegan” shanties. We settle for the night, in between. A no-man’s land of a couple small motor-homes and a well maintained renovated 60’s school bus, which we find is conveniently located to the city’s cemetery – we never did determine if it was for pets or people. The lack of amenities leaves the matter of number-twos, in a desert where shrubberies and privacy are in equally short supply. We retreat to Niland for dinner at the local pizza parlor and a washroom stop.

We return in the dark, and even with our camp marked on the GPS get lost in the gravel-sand maze. A decreasing radius search and vague memory of the sparse landmarks finally reveals our camp.

You might expect night to be loud, a party of music hooting and hollering, a burning man in perpetuity. It isn’t. Looking around this is more burning man after it’s burned up, burnt out and most everyone’s gone home. An event it seems is not a lifestyle.

In the weeknight’s dark all you hear is the occasional explosions booming in the Chocolate Mountains, the thrum of passing military helicopters running lights out, and generators.

Of the night sounds, strangely it’s not the war-zone thud-thud-thud of helicopters or the thump-boom resonance of explosions from the Aerial Gunnery Range and “Impact Area” that bothers. The military has the good sense to wrap up air tactics, Close Air Support (CAS) missions, laser system operations, and air-to-ground bombing, rocket, and strafing practice by 10PM. Not all the Slab City denizens are as considerate.

Like every RV park, there is always one or two “campers” who insist on running their generators for all but a few hours of the night. Who knew people still watched Leno? It just doesn’t seem a Conan or Ferguson crowd. Eventually though the generators stop, the bombing calls it a night and the coyotes sing in yipping chorus and solos.

A short distance away, over a painted hill, Slab City’s most notable resident sleeps in the back of a truck.

On Slab City’s leading edge is Salvation Mountain, the life work of Leonard Knight. A psychedelic rework of a hill, coated with adobe clay and bright multicolored paints.

Salvation Mountain is your welcoming trip, an “Oh, wow man” experience that proves love of Jesus can motivate 30 years of near single handed construction and the questionable use of acrylic as a structural element. In the setting suns light, the colours pop, run over and explode, like a child’s magic bedtime story, a psychedelic trip or rapturous schizophrenic hallucination. Reds, pinks, yellows, blues and whites in a mad hatter scheme all praising the great triplicate with the exuberance of a pre-schooler’s finger-paints flung life size into reality. All that’s missing are dinosaurs, and they are painted on the water towers on the backside of the hill.

Leonard’s work has ground him down. Like a good supplicant his body is bent, cataracts cloud eyes that still sparkle with a child’s wonder at the world, distances are counted off in steps, and his mind is starting to slip. At 79 yeas old conversations are circular, to walk around a corner and come back into view is to meet anew, and yet Leonard is happy. Joyous even, in his descent into ruin, he is doing what he set out to; proclaim his lord’s love and the message of love.

The original plan was to travel his message across the US using a home made balloon, but rotting and tearing fabric put an end to that plan. Beyond that there’s considerable latitude in the versions of Leonard’s arrival at Slab City over years of retelling. There isn’t in his message though.

Leonard’s is not the implacable, unrelenting braying of holier-than-thou fundamentalist chastisement we’ve come to associate with religion. Instead it’s a simple message without twisting, convolution or hypocrisy. This is love and devotion incomprehensible by Sunday churchgoing masses or nightly prayer exceptions. It is lived daily by Leonard, and it is lived with a hope that his message will last beyond his time.

The hope comes with Congress. Senator Barbara Boxer entered Salvation Mountain into the Congressional Record as a national treasure, that afforded it recognition and protection. Leonard though hopes to hear back about Congress maintaining the site for prosperity with an any-day-now optimism. Senator Boxer’s efforts date back to 2002. If Congress fails to take up the maintenance of Salvation Mountain the site’s fate is unclear. It’s hope may slide into disrepair, or perhaps the citizens of the slabs or the thousands who visit the site annually will take up the cause.

The oddest thing about Leonard’s Suess-on-a-trip creation isn’t colour or organic architecture or the message, it’s that the message gets out at all. Sitting on the outskirts Slab City, a community composed of those who’ve made an effort to avoid the world, in a sun bleached place, this adobe and acrylic manifestation of one man’s hope, belief and love has resonated through pop-culture. Even if Salvation Mountain doesn’t survive Leonard it will continue to echo on in books, film and television even as the colours fade and adobe crumbles.