On the bench at MotoMethod.com 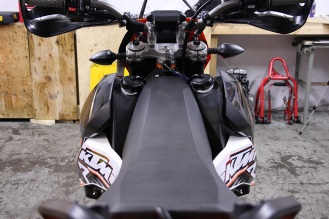 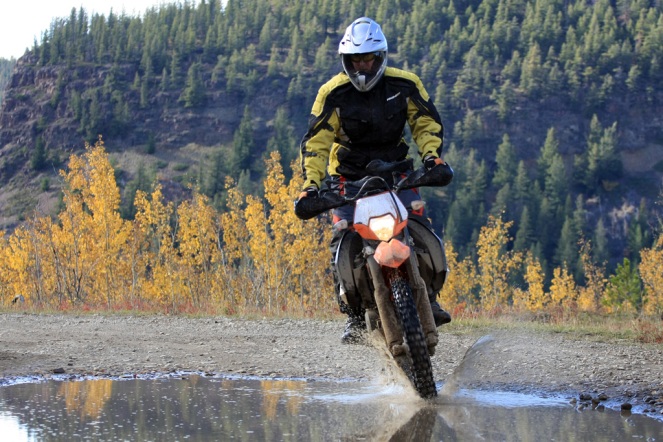 Fuel; complain about paying for it, but not having enough is when it becomes a real pain. Especially in backwoods BC, where choosing the fun routes means gas stops are few and far between. By far we mean further than a KTM 690 Enduro R’s 12L stock tanks will carry you. Enter the Rally Raid Products UK Tank Kit, or the 9.5 litre solution for extending the range of our KTM 690 Hard Adventure R project.

The kit consists of two high-quality molded plastic tanks that fit snugly behind existing side-panels on the left and right front sides of the bike giving you 9.5 litres of extra fuel. It’s a setup that allows easy access to the air filter, quick removal of the seat and extra range and doesn’t denigrate the looks of your KTM 690 Enduro or Enduro R.

Regarding the feel of the bike, the change is actually minimal in terms of the front end. If anything the tanks’ weight helps moderate some of the harshness of the R’s front forks, though keep in mind I’m coming from a 640 Adventure with well-worn suspension.

The tanks may be slim, buy they still change the nature of the phenomenally capable 690. Your ability to move around the bike, as in stand over the front tire to stick it, is relatively uncompromised, especially compared to wider tanks like the Safari. The weight distribution is also better than the Safari offering, as the Rally Raid Products kit keeps the fuel’s weight positioned as low as possible on the 690. Kudos to Rally-Raid Product for avoiding transforming the 690 Enduro R into a top-heavy barge.

Empty, the tanks aren’t in the way, which is good, because after the jiggery-pokery of positioning them during mounting I’ll be damned if we’re taking them off again. That said it would be lovely if the tanks were a hair slimmer, just to keep some of 690’s uber-narrowness and allow you to slide up and down the seat a little more easily. That would also moderate the ergonomic issues for those of us with longer legs, as the tanks’ extra width spread your knees while sitting during those highway transits between dirt. I’d say liaisons, but that would just be Dakar poser-speak. We are, however, in a realm of trade offs here, range versus mobility on the bike, versus practical design considerations.

In terms of installation, I’m not a mechanical guy, so our photographer Kevin did the heavy lifting, while the good folks at MotoMethod.com provided the workspace, and thank freaking gawd! Far as I’m concerned the installation is a one-way trip, especially after a protracted 8 to 10 hours of wrenching. The first big “gotcha” is the directions; several of the steps needed more explanation and expository pictures for those new to the KTM 690 Enduro and doing a self install. For example, those with stock bikes will have to conduct an emissions canister-ectomy for the kit to fit, and there’s little to no mention of this in the directions. As a corollary to this, clear instructions on the quick on-off of the tanks after install would be useful too – just to allay neophyte mechanic fears. The second “gotcha” for us was our KTM radiator guard on my installed on the 690 Enduro R, which I’m keen on keeping it.

While I know (from experience) that the tanks will take and impact, I don’t want that force transmitted into the radiator. The guard however made positioning the tanks a challenge, though not impossible. That is down to the tanks having very low tolerances in terms of how much “wiggle room” you have to fit them, so they don’t accommodate extra bits being in the way.

The only other major point of concern I have is a bit of seepage when the bike is laying on its side. You know napping mid trail after a hard bit of riding like a dirt bike does occasionally. Do not use this as an excuse for a smoke break.

The top of both my tanks wasn’t planed particularly flat, so the o-ring provided between the threaded-filler and the tank surface isn’t flush. So there is seepage and potentially ingress of dust or water into the tanks. We fitted thicker o-rings, which has helped, but I will be chasing down some sealant this winter to make the bike spark-safe. Rally Raid Products UK has since updated the tank design, making the thread for the filler part of the tank moulding, eliminating this problem. Indeed they’ve even offered to send us an updated set of tanks, which is well and beyond what we’d have expected as a solution.

Integration of the tanks into the existing fuel system is tight, so there’s no messing about with valves to switch between your new front tanks and the stock rear one under seat. The front tanks self-balance in terms of their levels, and feed directly to the fuel pump through an adaptor. There is a moment of wincing when it comes time to drill a new hole in the plastic tube that is part of the fuel pump assembly, but once that’s done, the pump reassembles into the provided adaptor plate seamlessly and more importantly without any leakage. Admittedly fueling up is a bit of a pain, including the stock filler your KTM 690 Enduro is now up to three orifices, which is one or two shy of an orgy.

The provided fuel lines are quite flexible and soft, so mind that you don’t zip-tie them too tightly to the frame. There’s also a shut off valve for separating the front and back fuel sources, and quick disconnects for when you need to remove the tanks for servicing the bike. Unfortunately one of our disconnects (from a third party supplier) was leaking, so we added a filter in its place as a work-around. Rally Raid Products UK is sending on a replacement for this part also, so you certainly can’t fault their customer service. In terms of all these extra fuel lines the routing is well thought out, and keeps the lines out of the way of snags in the event of a down… which of course never happens.

Holding the tanks securely to the frame in such an event are CNC machined alloy mounts. These are assisted by the design of the tanks themselves, which on the backside wrap the trellises of the frame. While we’ve noticed that the 130mm long steel studding affixing the right tank to the CNC mount has bowed, a drop still appears to be business as usual – namely pick the KTM back up, brush it off and keep going.

The only problem on the trail is getting an idea of how much fuel you truly have left, and as a practical consideration, I wouldn’t do the black tanks again. The natural/opaque tanks let you see the fuel level at a glance, which is a practical point that overrides the visual appeal of the black plastic setup.

Often “upgrades” compromise a bike like the KTM 690 Enduro R, which is all hard edges and epic dirt aspirations, but the Rally Raid Products Tank Kit really is an upgrade for long-range off-road riding – one that I’d do again in a heartbeat. These tanks add enough fuel to make the Enduro a 690 Adventure (the range charts here have bourn out) with a conservative range of 360km. The big trick that the Rally Raid Tank Kit accomplishes is that it doesn’t leave you with an unwieldy, top heavy or, and this is a pure pride point, hideous Franken-KTM. If you need the range, and often with multi-day rides in BC you do, I’d highly recommend these tanks.

For more information and current pricing (approximately $975.00 US) hit up Rally Raid Products UK or for North America purchases KTMTwins.com.

Update: June 20th, 2011
We’ve solved the problem of leaking fuel with the first generation of the tanks using a bit of gasoline resistant sealant.
Beyond that though the relationship with this product is proving a little hot and cold. I love the additional range, but there’s been reliability issued that can be traced directly back to the kit. The install relocates the coil, the leads to which keep breaking. Originally we’d blamed KTM, and surely the fragile little wires leading to the coil were partially the cause, so we’ve replaced them repeatedly. Having done so though problem has recurred. Several roadside repairs later, the conclusion is that the relocation is seeing the coil leads pushing agains the rad hose. That, and the plate that the relocated coil mounts may be vibrating more than the original direct to frame mounted position.
The solution was a plate update from Rally Raid Products, and rewiring the leads into the coil with a heavier gauge wire.