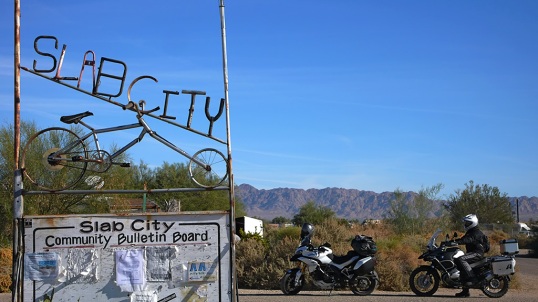 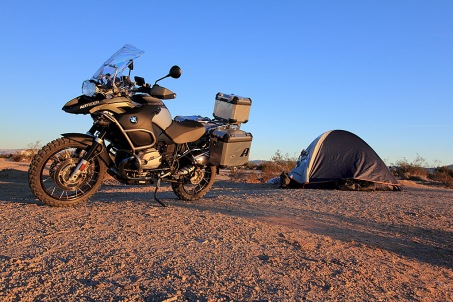 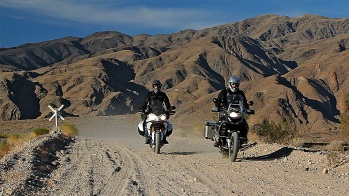 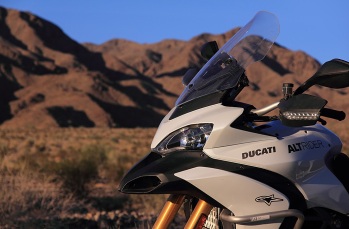 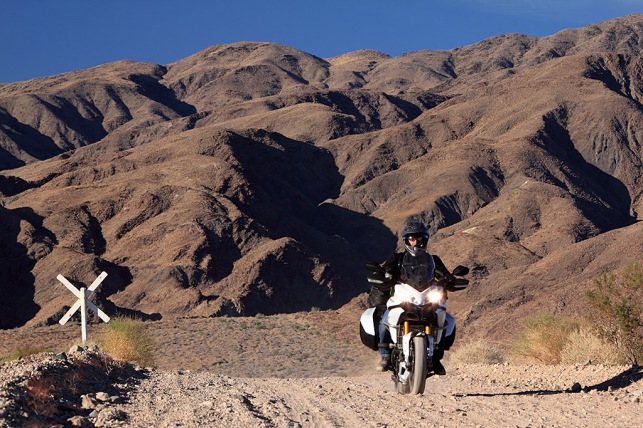 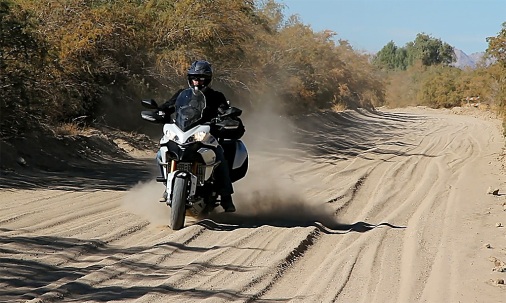 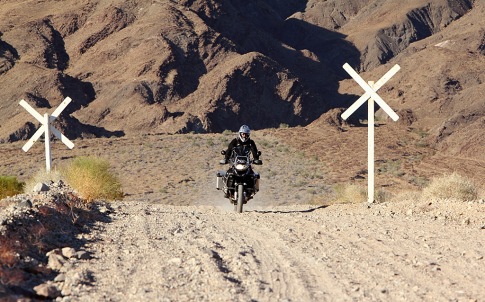 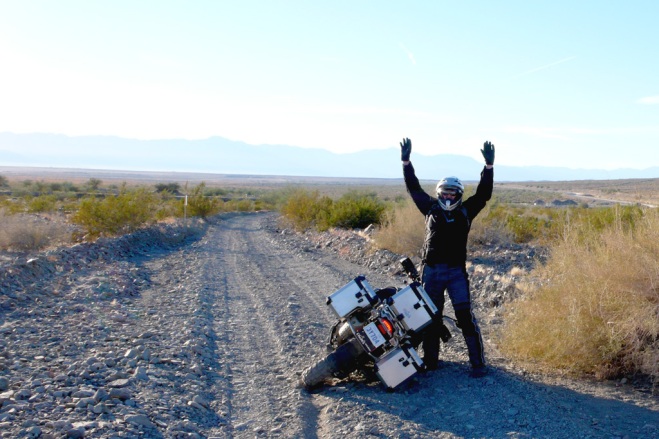 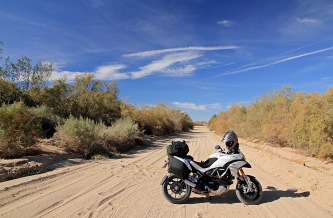 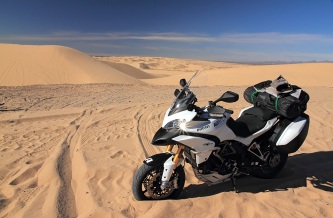 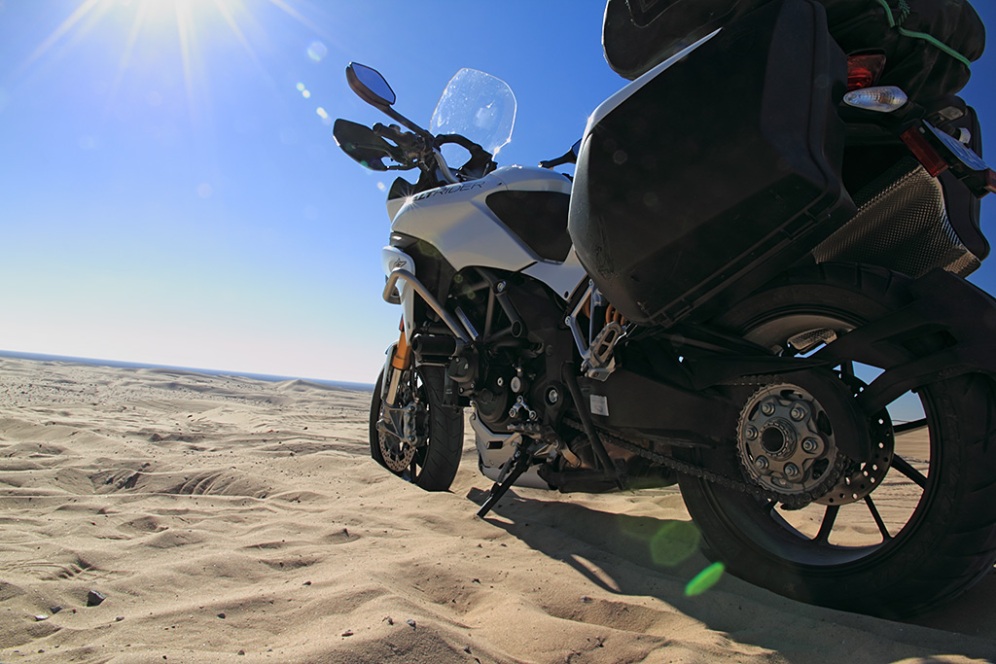 After hefting the Honda Varaderos through the Baja, I came to a conclusion – I hate big bikes in sand, and the “Iron Pigs” took the cake. Of course, the back way out of Slab City is what you’d expect of a desert; sand and deep sand at that. The surprise though is that while the BMW R1200GS Adventure (GSA) sinks down, into, and plows along gracelessly through the grit, the Ducati Multistrada 1200 S stays atop marginally longer. Perhaps then, we’ve been too quick in dubbing it “the Princess”.

If you’ve a knack for riding the GSA in sand, you’d likely be laughing your ass off at my stumbling, foot-down, front-end plowing efforts with the fully loaded BMW. Even equipped with the one option the Multi can’t have, knobbies, the BMW is a handful. Actually handful is to small a term. This isn’t a matter of if I’m going to drop it, but (in a confluence of fatalism and realism) when.

On the GSA the knobbies have been a mixed bag really. We switched to the Metzeler Karoo T’s back in Palm Springs, and while they’re significantly better in the dirt and gravel than the take-off Tourances, they have crippled the GSA on the road. On pavement the squirm in the corners when pushing runs from disconcerting to downright frightening. On grooved pavement, they track like a herd of sheep, which is to say you’re suggesting the general direction and praying no one startles. If I test rode the GSA equipped with the Karoos while shopping for an adventure bike, I probably wouldn’t buy one. And being scientific about it we tested different loads and a range of pressures, over which these tires thoroughly hide the bike’s brilliance.

And they don’t last. For the few percentage points of performance in the dirt, I’ll take the Continental TKC 80s we used on our Arctic Challenge. On road the Contis don’t seem to hobble the bike near as much as the Karoos, and are near as good for moderate off road usage.

That of course brings us to the Ducati Multistrada’s Pirelli Scorpions. Yes, street tires wearing the label Trail, but sticky rubber is sticky rubber and they are performing better than expected.

They aren’t going to paddle you out of the deep sand, but purely as a function of weight the Multi has forced us to eat a few of our words and reset our expectations. When the sand gets deep and the going slows, the Multistrada is easier to manage than the GSA. Though we shied away from taking the Ducati out onto the Algodones Dunes, no one wants to make the call a call that starts with, “Hi, about your bike, it went down the dune just fine, but…”

That goes for the big GSA too, until I wrap my head around the entire sand issue. So let’s call the bikes on par in such conditions, at least in the hands of mere mortals. Though sending up plumes of roost is good fun.

In terms of reliability, the Ducati’s electronics have settled down moderately. The Multi has “self repaired”, and is recognizing the keyless fob again saving us the hassle of entering the pin code to fire it up. We’ve still avoided locking it, lest the electronically actuated lock fails to disengage, because past experience indicates being stuck in the middle of a desert is bad. And, the last random stall was a couple thousand kilometers ago. It’s the GSA’s turn though, as the clutch has been smelling for the past few thousand kilometers during low speed work. Despite operating fine, the smell is worrying and the engagement is on the light side.

Other bits are less surprising.

The GSA though still will walk away from the Multi any day on hardpack, gravel, ruts, potholes, washboards and dirt. Our original take on the combination of tires and suspension on the Multi has been vindicated. Soon as the Ducati’s suspension comes into its own offroad at 60kph+/40+mph, the Pirelli Scorpion Trails are at their dirt traction limit. Meanwhile the GSA is simply pulling off into the horizon. The inequity is making filming a pain, because bike-to-bike shots are either slow enough for the Multi on dirt or slow enough for the GSA on pavement.

Both bikes have taken their first spill. Kevin’s drop of the Multi was coming to a stop on a gravel descent, with a bit too much front brake, a bit too little traction and a bit of ABS. A newbie mistake, but they’re mistakes for a reason and we all make them.

For the GSA I was carrying more speed than I wanted when the front tire was caught in a gravel berm and pushed. A graceless move on my part, but the GSA was none the worse for wear after its date with gravity; there’s a pick it up and brush it off toughness here. Though you might want some help for the pick it up bit. On a smaller lighter bike I’d probably not have gone down, or been able to save the fall, but we’re never going to escape the GSA’s Jovian weight.

The Multi came out of it almost entirely unscathed, thanks to the AltRider drop guards and frame sliders protecting the fairings, hand guards and mirrors. The only thing to receive a scuff was the Ducati issue luggage. We’ve been on the phone to TwistedThrottle, and are looking at options to ditch the Italian Man-purses for luggage that’s top loading, can take a fall and will actually fit a laptop. The 31L Trax hard bags and racks could fit the need. The Trax dry bags have already been keeping our belongings dry, and we’d highly recommend them for the water-resistance and convenience of packing.

At that point where the Ducati Multistrada 1200 S is armoured and sporting a couple of top loading bags, the bike isn’t so much a Princess as a Borg Queen; soft on the inside, and covered by bolt on plating on the out.