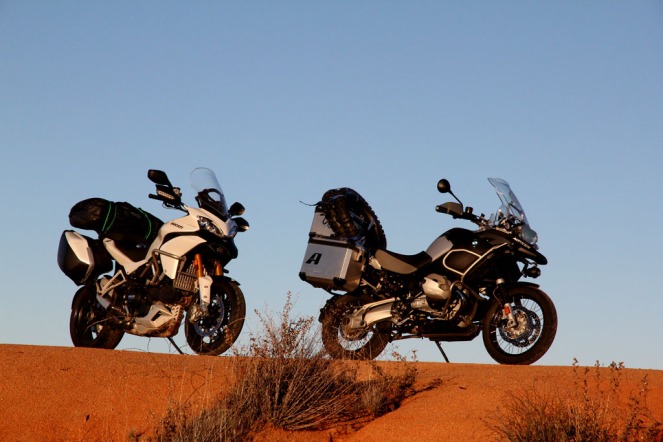 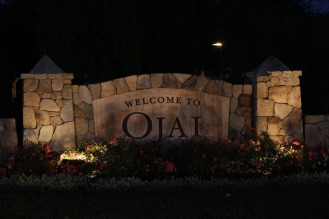 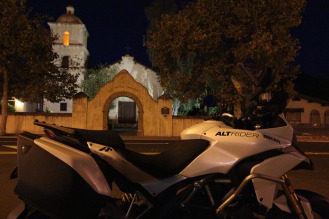 Sometimes names stick, and if bikes have a temperament then our BMW R1200GS Adventure and the Ducati Multistrada 1200 S Touring have earned theirs. So, respectively meet Wolfgang and the Princess.

If you’ve read Neil and the Machine versus Florence and the Machine, then you know I’ve put some distance on our BMW R1200GS Adventure loaner, more than just Vancouver to LA. From November 2nd to 25th, the R1200GS Adventure has flawlessly clocked over 7000kms (4350 miles). For vague cultural reasons I associate the name Wolfgang with being decidedly teutonic, reliable and overbuilt, so the name has stuck.

The only complaint is Wolfgang has a taste for oil, but the consumption has been slowing off as the engine breaks in. That’s not the only improvement, the engine, and thus the vibes through the bars and pegs, have continued to smooth out too.

As we’ve commented before, the versatility of the GSA is outstanding. That’s to be expected from a proper adventure bike, but the GSA has some moves on the road to. Even with the less-than-sticky Metzler Tourances slapped on the cross-spoke rims, the big bike made handy work of the 150 out of Ojai last week (see video below). Just as a note, the video camera was mounted on top of the Adventure’s “beak”, so if it looks like we were leaning, we were.

The GSA though is a somber and practical bike, and while capable of outbursts like the 150 run it’s a lot of bike to muscle about. Solidity though is a huge selling point, we’ll put up with the clack of plates with each shift from the tractor gearbox for a bike that starts every time.

Which brings us to the 2010 Ducati Multistrada 1200 S Touring, MTS for short, a brilliant bike that’s been worrying us with flaky electronics. The MTS hasn’t accumulated the same milage as the Adventure, Kevin trailered it from our Vancouver pick-up to Sacramento, where we met up to continue southwards for a bit of adventure and filming.

To be honest, I can’t convey much first hand about the MTS, because Kevin’s adopted the Ducati as his own. You’d have an easier time wresting a bone away from a feral dog, than getting the Ducati’s fob. Of course you’ll have to catch Kevin and the Ducati first as they dance effortlessly away into the distance though the corners.

Where the GSA is capable of outbursts this is the MTS’s reason d’etre. Riding with someone on the new Multistrada is like riding herd on a six-year-old spun up on candy, Redbull and Christmas enthusiasm. Each corner is a gift to be unwrapped; ferociously ripped open with a tear of torque and then move on to the next.

There’s no doubt the Multistrada is fast, 150hp superbike hidden in a sport-adventure package. Whiplash, “What the hell was that going by?”, fast.

Kevin has had to tone down from the sport-mode’s hero settings slightly, “I think I need to dial it back to touring mode, in sport the front end keeps coming up out of all the corners.”

As amazing as the Ducati is on the roads, it is feeling precious for a sport-tourer let alone an adventure bike. The oddly shaped bags, hold next to nothing, and that nothing has to be as oddly shaped. The leading edge of the panniers has a quarter-inch gap that disregards the concept of “waterproof” or even “water resistant”. Ducati will be issuing a 2011 fix for this that is retroactive to the 2010 models, but it’s damn inconvenient and for the time being we’ve covered over the gap with duct tape. What might not be fixed in the update is the fact the bags are just plain flimsy.

What this really means is that Multistrada owners will need three accessories for traveling. The first is a set of drybags like the Trax units from TwistedThrottle. The second is AltRider.com dropbars and sliders for the inevitable gravelroad spill – an investment that is much cheaper than replacing plastics and adds edge to the Ducati’s look. The third? A friend with an R1200GS Adventure to carry the rest of the luggage their Princess can’t be bothered to carry herself.

It’s not just getting the fob away from Kevin that’s the problem though, its the keyless ignition itself.

In two days we’ve been stranded by the MTS twice. The first was using the bar lock in San Ysidro just across the US-Mexico border from Tijuana. Press the ignition button, which should release the lock, and the circular information window simply displayed “Unlock Error”.

The solution, until the 2011 update is available, is to blow dry the ignition sending unit, which apparently is temperature sensitive. A thanks goes out to the staff of the San Ysidro TravelLodge, for finding a blowdryer and extension cable, then not panicking when the blowdryer tripped the circuit breaker plunging the office, computers and continental breakfast into darkness. Personally I think the ignition simply requires a certain embarrassment quota before starting.

Now lets face it, San Ysidro (just south of San Diego) isn’t an extreme environment.
Nor is Lake Elsinore, where after an evening in the parking lot, we went to move the MTS to a safer location for the night only to have it request a PIN code. So another call has been put into Ducati’s Canadian Service Manager, with the hope that there is a PIN code and an equally simple solution.

That’s making light of a serious issue for the Ducati sport-tourer/light-adventure bike, because we’re planning to take the Multistrada places where no hairdryers or cell service are handy. I dread to thought of having to cancel filming of our “Road to Ruins” series due to the Ducati’s reliability, but not as much as I dread being stuck in Joshua Tree, the Mojave, along the border with Mexico or at any vaguely remote Ancestral Puebloan Ruin in the Southwest.

The curious epilogue is that three days later while filming on Highway 33 outside of Ojai, the Ducati Multistrada 1200 S started recognizing its fob again and starting using the keyless proximity system. With the MTS self repaired, the pin code set and forewarned against locking the Duacti, we’re not too concerned as we wrap filming “Great Roads” in Ojai and head off to start shooting “Road to Ruins” later this week.