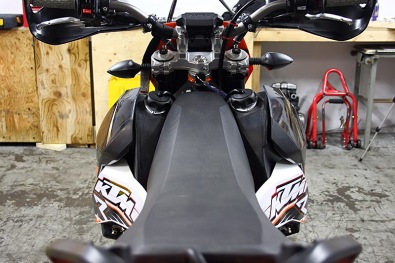 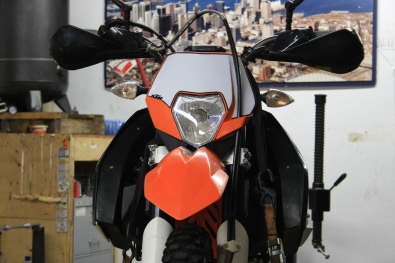 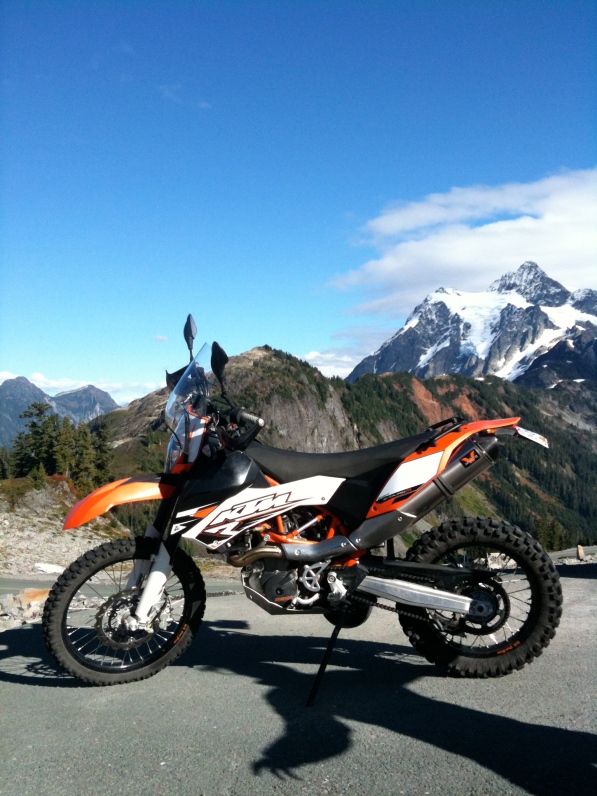 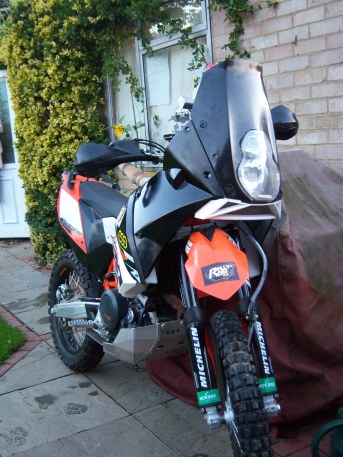 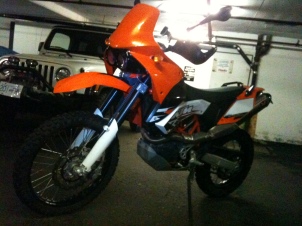 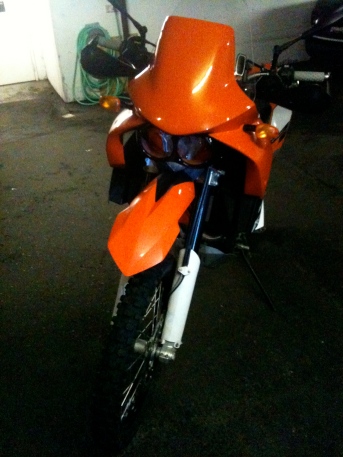 The 640 Adventure Fairing looks the business…
I’ve just come back from a shake down ride to Mt. Baker and back, and the KTM 690 Enduro R travelled 260km with fuel to spare, which is further than my ass is willing to go in a single sitting on the stock seat. That range is thanks to the install of the Rally-Raid Products Tank Kit (expect a full review and video of the install in coming weeks) and MotoMethod.com, who provided the shop space and tools for the install. Still, the issue of wind protection on longer rides like the run to Baker is a concern.

I’ve implemented a temporary solution, but the handle bar mounted windscreen is not only inelegant, it’s hideous. And, when I say hideous, I don’t mean with that “pretty/ous” (pretty/hideous) design sensibility of most adventure bikes on the market, it’s just plain ugly. To it’s credit, the bolt on is light, provides adequate wind protection and can be taken off in a hurry… though not fast enough in a parking lot to avoid onlookers retching.

The other option I’m considering comes from Rally-Raid Products again. The UK companies Adventure Fairing Kit adapts the upper fairing from the KTM 950 Adventure to the 690. Ok, to my adventure rider eye it looks like sex on two wheels, and posted to facebook there was a a very basic reptile brain response; “WANT!”

The Adventure Fairing Kit would solve a number of problems in the build out of the 690 Enduro R into the 690 Adventure; namely lighting and wind protection. So the decision should be easy, assemble the parts, curse for a few days of assembly, but then I did something dumb. Kevin had his 640 Adventure apart while hunting down a short in the wiring.

I swear, the fairing was just laying there… and damn it looks good. Suddenly it occurs to me that with a set of Clearwater Glenda LED lights (switched out for the 640 Adventure’s heavier conventional units) and some fabrication work at a friend’s shop the 690 Adventure project could go a different direction.

A few things recommend the idea of using a 640 Adventure fairing. First, you can find 640 parts (with a bit of searching) used. Come to think of it “Scar” (my faithful 640 Adventure) is sitting unloved in the garage and could live on as a temporary donor while Kevin and I (mainly Kevin) work out a mounting system . Second, I’ve always liked the airflow on the 640, as it produces less buffeting airflow than the 950 Adventure I tested several years back. Third, it’s near perfect for shoving some LED’s into those evil eye sockets. Lastly, to my eye the fairing more proportionally fits the 690 than the 950 Adventures.

The downside (and this is a big one) is that using a 640 Adventure fairing on the 690 doesn’t come with a kit, instructions, or any sort of “e-mail for help” safety net. That means, using the 640 fairing would also take the project a lot further down the custom bike building rabbit hole than I ever intended.

So what do you think? Have your say below in the comments.